A Christmas in Corwall by Tamara Gill- Book Blast + Giveaway 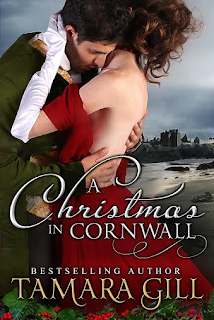 After two failed seasons in town, May Stanford sees her future no longer with her family, but in a nearby convent where she’ll not be anyone’s financial burden. But before she can embark on her new life, May must complete her dealings with the local smugglers, men who have kept a roof over her family’s head during frugal times. One last Christmas at home and her life would change forever. So when William Scott, the Earl of Grandison arrives and crumbles her perfectly planned future to rubble, May is less than pleased.

William, Lord Grandison works for the Crown, and is determined to catch the nuisance Englishmen who dare smuggle along the Cornwall coast. William has never veered from his pursuit of these men working against the law, that was until he meets May Stanford, the maddening daughter of his host for Christmas. May drives him to distraction and forces him to admit to feelings he has never felt before.

But when May and William discover the crippling truth of each other, their secrets will threaten to tear them apart.

EXCERPT:
May’s little brother sat beside her, staring in silence at the ocean to the left of the carriage. He was angry at her decision, his sullen face throwing daggers at her every so often. But she refused to be a burden to hPim in the years to come. It would be hard enough for her sibling to keep the estate without the added stress of a spinster sister who ate his food and needed clothing and board. Becoming a nun allowed her the life she wanted to lead without straining her family’s coffers.

“Explain to me again just why a beautiful young woman such as you wishes to lock herself away in such a place. Now, don’t get me wrong, May, I’ve always encouraged you to make your own decisions, but it’s a convent. You’ll be married to God. I fear you will regret your choice,” her father said.

May cringed, hating his dejected tone, or that she’d had the same argument numerous times with her papa. Today, finally, she’d been able to persuade him to make the five-mile trip to the convent and meet the mother superior. It may not have been what she’d always wanted, but it was for the best considering her changed opinion on husbands and the family’s circumstances, which were worsening every year. “This is my choice to make. I know it’s not something you agree with, but I’ll be happy there. I know I will.”


Tamara is an Australian author who grew up in an old mining town in country South Australia, where her love of history was founded. So much so, she made her darling husband travel to the UK for their honeymoon, where she dragged him from one historical monument and castle to another. A mother of three, her two little gentleman’s in the making, a future Lady (she hopes) and a part-time job keep her busy in the real world, but whenever she gets a moment’s peace she loves to write romance novels in an array of genres, including regency, medieval and paranormal. Tamara loves hearing from readers and writers alike. You can contact her through her website, and sign up to follow her blog or newsletter.


Contact Tamara at tamaragillauthor@gmail.com
Posted by gpangel at 12:00 AM