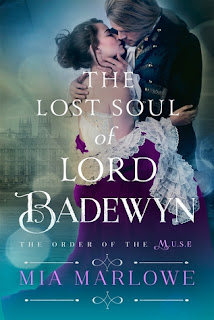 He vowed to never fall in love...

Meg Anthony was never raised a lady. Instead, she grew up amongst grifters who used her unique “finding” ability for their own selfish purposes. Recently, she's been taken under the wing of the Duke of Camden and the Order of M.U.S.E., learning not only the fine art of becoming a lady, but how to use her extraordinary talent to help others.

But Meg's gift is a beacon to unsavory characters who would possess her.

Charged with her protection, Lord Badewyn knows—too well—that his wild, Welsh castle is no safe haven for this lovely, all-too-desirable creature. Part human, part fallen angel, he is one of the Nephilim. He is a recluse sworn never to love. As the dangers to Meg grow more threatening, he cannot help but find himself tempted beyond all reason...and tested to see if he has both a heart and a soul. 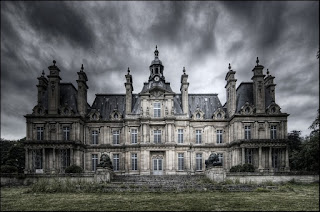 The Lost Soul of Lord Badewyn by Mia Marlowe
My rating: 4 of 5 stars

The Lost Soul of Lord Badewyn by Mia Marlowe is a 2015 Entangled: Select Historical publication. I was provided a copy of this book by the publisher and Netgalley in exchange for an honest review.

An incredibly vivid, and imaginative story!

I picked this book up without realizing it was part of a series, but people who know me, can attest to my long running habit of reading books out of order. All's well that ends well, at least in this case, since, thankfully, this book can be read a stand alone.

The other thing most people know about me, is that paranormal elements are not my first choice these days. But, since this is also a historical romance, I thought I might give this one a try, and I am happy to report once more.. All's well that ends well.

“I've heard it said the best gift a man can have is a noble friend. Failing that, the second best gift is a noble enemy. I have no friends and my enemy is my father. Alas, he is anything by noble.”

Samuel Badewyn is a Nephilim – part human, part fallen angel. He's an astronomer, is a gifted 'watcher', but has locked himself away in his castle located in Wales. He will not fall in love, he will not marry, nor will he have children. To do such a thing would come at too high a cost.

“When I was younger, I longed for a way to escape Uncle Rowney and the crowds he drew, by using my unusual ability. I thought I'd be swallowed up by all those pressing bodies, those desperate demands for me to “Find” their loved ones or their lost heirlooms. Now, in the loneliness of Faencaern Castle, I could do with a bit of a crowd.”

Meg has been taken in by the Duke of Camden and the order of the M.U.S.E, and is trying to learn how to become a proper lady, and use her gift of “finding' to help others. However, her relatives have caught up with her, so in order to keep her safe, she is sent to Wales, where Samuel Badewyn will protect her.

Naturally, Sam and Meg find themselves to be kindred spirits of sorts, and while Sam would not mind marrying Meg, the dastardly plans of his father, Gigori, a fallen angel who fell in love with a human, which brought down a horrible curse, makes it impossible for them to marry.

This story has a poignancy to it, mixed in with the author's huge imagination, a little action/ adventure, and some very interesting characters and scenarios.

Sam and Meg are both down on themselves and feel love is something they are not worthy of, but find in one another the true meaning of love. Even if you are skeptical of the 'soul mate' concept, it's hard to argue with the idea when it's so obvious Sam and Meg are made for each other. The forbidden love element is a big hurdle to jump, with their class differences, and of course the danger involved if they were to marry, making the situation tense and emotional.

The side story involving the Duke's quest to make contact with his deceased wife, opens up a new avenue for Camden, and his romance with the fire Mage, Vesta, could take an unexpected turn, as a result.

“I used to think the stars were cloaked in mystery, distant and unknowable. Now I am persuaded they are open books compared to the human heart. For good or ill, a person will surprise you every time.”

I don't read a lot of books that feature angels, fallen or otherwise, and in all honesty, before I read this book, I had never even heard of a Nephilim. The author did a great job of building up a story around this cryptic creature mentioned in the Bible. However, a lot of references to religion and God in this context makes me uncomfortable. I know, I hear a collective groan going up, but that's just me. Still, I am able to keep it in perspective and I do think I understand what the author was going for here and it really was quite intriguing.

There were a lot of characters in the book, and the author wisely included a guide with the cast of characters listed along with their particular gifts. Often, I complain long and loud about this type of thing, but with this book, it didn't do any harm, because the story didn't get bogged down or become too busy. In fact, the pacing was even, and the story flowed smoothly.

I was a little puzzled by the end of the thread involving Sam's father. After all the push/pull in the story, I would have thought this story line would have been tightened up a little, because I still had some questions in regards to that curse, and still felt a little uneasy about Grigori.

Overall, when you get down to the nuts and bolts, this is a sweet, epic love story, albeit a little unusual, about two people coming together, determined to hold on to what they have with each other, despite the odds against them, and finding that they really do deserve to be loved and find happiness. 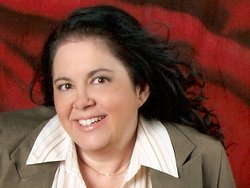 Mia's work has been featured in PEOPLE magazine's Best of 2010 edition. One of her books is on display at the Museum of London Docklands next to Johnny Depp memorabilia. Her books have been tapped for numerous awards including RomCon's Reader's Crown, RT Reviewers Choice and Publishers' Weekly named her Touch of a Rogue one of their 10 Best Romances!