The Rebel by Adrienne Giordano- Feature and exclusive excerpt + Giveaway 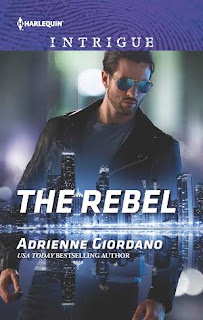 THE REBEL by Adrienne Giordano

Bad to the bone…in all the right ways

A brilliant civil lawyer, David Hennings has always been the outsider—at odds with his wealthy family, shunning relationships, defying convention as a sexy leather-jacketed biker. Which is why sculptor Amanda LeBlanc agrees to his request to reconstruct a skull from a cold case murder. The instant heat between them is scorching.

But once Amanda takes the job and gets too close to the rebellious attorney, her carefully balanced life is upended by a series of methodical attacks. Someone doesn't want her to finish the job. Now David will risk everything not to lose the woman he unknowingly put in jeopardy.


Inside the stairwell of the hundred-year-old building on the city's West Side, David climbed the last few steps leading to the landing of Amanda's second-floor studio.  He loved these old structures with the Portland stone and brick.  The iconic columns on the façade urged the history major in him to research the place. Check the city records, see what information he could find on who'd built it, who'd lived there or which companies had run their wares through its doors.


Structures like this one had a charm all their own that couldn't be duplicated with modern wizardry. Old buildings, this building, had a life, a past to be researched and appreciated.

Or maybe he just wanted to believe that.

He rapped on the door. No hollow wood there. By the scarred look and feel of it's heavy weight under his knuckles, it might be the original door.  How amazing would that be?


The door swung open and a woman with lush curves a guy his size could wrap himself around greeted him.  She wore jeans and a graphic T-shirt announcing he should make love, not war---gladly, sweetheart--and her honey-blond hair feel around her shoulders, curling at the ends.  The whole look brought thoughts of lazy Sunday mornings, hot coffee and a few extracurricular activities, in a bed and out, David could think of.


To say the least, she affected him.


And she hadn't even opened her mouth. Please don't be an airhead.

Yep. That was the voice from earlier. Soft and sweet and stirring up all kinds of  images right along with Sunday mornings and coffee.  With any luck, more than the coffee would be hot.


Hokay. Mission Pam Hennings getting derailed by wicked thoughts.  Time to get serious.


David grasped her hand and glanced down at her long, elegant fingers folding over his.  Her silky skin absorbed his much larger hand, and he might like to stay this way awhile.  Nice hands. Soft hands. He'd imagined a sculptor's hands to be work-hardened and rough.  Not that she swung an ax all day, but he'd expected...different.


"Um."  She pointed at their still joined hands. "I kinda need that hand back."


Epic fail, Dave. He grinned and regrettably slid his hand away.  "Don't take this the wrong way, but where have you been all my life?"


As recoveries went, it wouldn't be listed among the top hundred in brilliance, but a man had to work with what he had. Still, her lips, those extraordinary, shapely lips, twisted until she finally gave up and awarded him with a smile.

"Good one," she said.  "Come inside and we'll talk about your project." 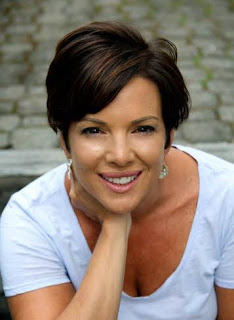 
USA Today bestselling author Adrienne Giordano writes romantic suspense and mystery.  She is a Jersey girl at heart, but now lives in the Midwest with workaholic husband, sports obsessed son and Buddy the Wheaten Terrorist (Terrier).  She is a co-founder of Romance University blog and Lady Jane's Salon-Naperville, a reading series dedicated to romantic fiction.
CONNECT WITH ADRIENNE:

My book Addiction and More

HEA Romances With A Little Kick

Reading On The Rocks

A Chick Who Reads