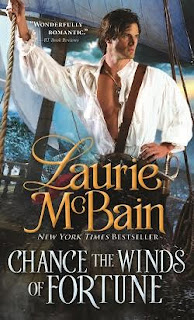 Rhea blinked in disbelief. “What an insufferable man you are. And whether you are, as you would have me believe, a marquis, or whether you are a tinker, I would still find you the rudest, most vulgar individual I have ever had the misfortune to encounter.”

“I am impressed by this splendid show of ladylike disdain, feigned though it be, but well done nonetheless. But the light of truth has revealed you in my cabin. Now, how do you explain yourself out of that?”

Dante glanced down at the map, which was lying at his feet. “Since the map is still here, I must deduce that was not your intended object in stealing on board the Sea Dragon. Rather, you wanted to make my acquaintance. Perhaps you imagined that a marquis makes love differently from other men you have known. I assure you, except for my own personal preferences, I am no different from any other man.”

Dante eyed the girl up and down, noting with distaste her limp hair and dirty clothes, and guessed she was eighteen or older. Probably older to have so arrogant a demeanor and the derring-do to beard the lion in his den. But one thing was for certain, she was old enough to be held accountable for her misdeeds. She needed to be taught a sobering lesson, one that she would not soon forget, Dante decided, for he was in no mood tonight to show leniency to anyone. Besides, odds were, if she’d had a pistol tucked away somewhere, he would be lying dead at her dainty, secondhand shoes right now.

“So, you wish to get to know me better,” Dante commented. “You have been rather inept at engaging anything more than my displeasure thus far. If your scheme is to succeed, then you will have to make a few concessions to me. You should have taken more care to learn my likes and dislikes. I am a very particular fellow about whom I let into my bed. And right now, you haven’t a ghost of a chance to fulfill that wish of yours.” Dante was pleased to see an expression of concern passing across her grimy face.

“However, that can be remedied quite easily,” he continued. “I’ve never been one to stand in the way of another’s ambition, as long as it does not interfere with mine.” He sounded almost friendly, but Rhea was not deceived, for his painful grip on her wrists had not lessened.

“Either you are hard of hearing or extremely obtuse,” Rhea declared furiously. “I despise the very sight of you and would find the burning fires of hell preferable to sharing a bed with you. I do not care if you have an arm’s length of titles to your wretched name, whatever that might be. All I desire is to get off this ship, and away from you.”

“Ah, come now, no more protestations against sharing my bed, for we both know how hollow they are,” Dante responded easily. His smile was forced, though, for this insolent chit had a way with words that cut deeply into a man’s self-esteem, and his had already been inflicted with a few jabs of late.

Dante’s gaze clashed with the violet eyes that were glowing with hatred of him, and he resented the fact that such beauty should belong to a dirty little street urchin, who would spit in his face if she thought she could get away with it unscathed. Her contempt for him was visible in every quivering ounce of her, and yet she was the one who had set out to entrap and deceive him. He was the one with the grievances, although to look at her one would think she had been the victim of foul play.

Dante allowed his eyes to linger on the contours of her face for a moment longer, a moment which seemed endless to Rhea. Then he smiled, and it was a strangely beautiful smile in spite of its coldness. Abruptly, he released her wrists, picked up the map, and walked away from her.

Lady Rhea Claire, kidnapped and shipped to the Colonies as an indentured servant, manages with wits and courage to escape...straight into the arms of a ruthless English pirate.

For all his worldly ways, Dante Leighton, Marquis of Jacqobi and captain of the Sea Dragon, never expected to discover his redemption
and his greatest treasure within the amethyst eyes of a beautiful English refugee. 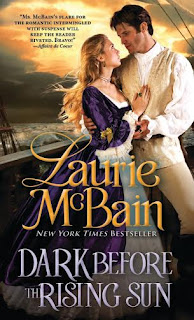 Lady Rhea Claire, kidnapped and shipped to the Colonies as an indentured servant, manages with wits and courage to escape...straight into the arms of a ruthless English pirate.

For all his worldly ways, Dante Leighton, Marquis of Jacqobi and captain of the Sea Dragon, never expected to discover his redemption
and his greatest treasure within the amethyst eyes of a beautiful English refugee.

Dark Before the Rising Sun Summary

Newly-wed, Lady Rhea Claire and Dante Leighton must return to England, where their reception is anything but warm.

Now armed with wealth and power, Dante is a target for the murderous smugglers who despoiled his family home, while Rhea’s father, the powerful Duke of Camareigh, vehemently rejects their marriage.

The two lovers thought themselves invincible together. But in the riveting conclusion of McBain’s epic trilogy, Dante’s determination to reclaim his family seat and Rhea’s desperation to win over her father threaten to cause an insurmountable rift that could break them apart forever.

Dark Before the Rising Sun by Laurie McBain
My rating: 5 of 5 stars

Dark Before the Rising Sun by Laurie McBain is a 2015 Sourcebooks Casablanca publication. I was provided a copy of this book by the publisher and Netgalley in exchange for an honest review.


“A Thousand ages in thy sight Are like an evening gone; Short as the watch that ends the night Before the rising sun- Isaac Watts

When we last saw Dante and Rhea they were sailing toward England to reunite Rhea with her family and announce their marriage. However, Dante still has a bit of unfinished business to attend to as well.

Sadly, the happy couple is met with stern disapproval from Rhea's parents. But, alas, Rhea is already pregnant, which puts things into perspective a little more. Once things settle with Rhea's family and her child is born, the time has arrived for Dante to bring his bride to his family home.

In order for Dante to fully live his life in the moment and look forward to his future with Rhea and his children, he will have to deal with an old adversary or two and hopefully clear his name once and for all.

The Dominick trilogy has been so much fun to get reacquainted with. Originally published back in the 1980's the book is written in a much different style than some are accustomed to, but this saga is absolutely ageless and timeless. Laurie McBain was an excellent storyteller and this sweeping family saga is one of the finest out there. These stories mingle danger, adventure, and intrigue in with a powerful story of redemption, with some retribution thrown in for good measure, and of course, a couple of sweeping and epic love stories, with a beautiful, inspiring and uplifting conclusion.

I loved this last book every bit as much as the two previous chapters in the series and highly recommend it to all historical romance fans.

Laurie McBain became a publishing phenomenon at age twenty-six with her first historical romance. She is a winner of the RT Reviewers’ Choice Award for Best Historical Romance Author. All of her romances were bestsellers, selling over 11 million copies. Laurie’s books have been out of print for over 5 years.