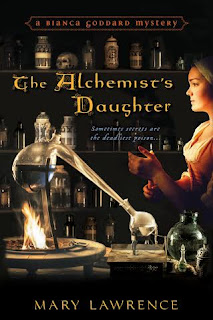 “A realistic evocation of 16th century London’s underside. The various strands of the plot are so skillfully plaited together.” —Fiona Buckley

In the year 1543 of King Henry VIII’s turbulent reign, the daughter of a notorious alchemist finds herself suspected of cold-blooded murder…

Bianca Goddard employs her knowledge of herbs and medicinal plants to concoct remedies for the disease-riddled poor in London’s squalid Southwark slum. But when her friend Jolyn comes to her complaining of severe stomach pains, Bianca’s prescription seems to kill her on the spot. Recovering from her shock, Bianca suspects Jolyn may have been poisoned before coming to her—but the local constable is not so easily convinced.

To clear her name and keep her neck free of the gallows, Bianca must apply her knowledge of the healing arts to deduce exactly how her friend was murdered and by whom—before she herself falls victim to a similar fate…

“Unique characters, a twisty plot and a bold, bright heroine add up to a great debut for Mary Lawrence’s The Alchemist’s Daughter. Mystery and Tudor fans alike will raise a glass to this new series.”
—Karen Harper, author of The Poyson Garden 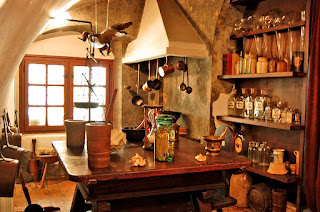 I'M THRILLED TO HAVE AUTHOR MARY LAWRENCE WITH US TODAY.  SHE HAS BEEN NICE ENOUGH TO ANSWER A FEW QUESTIONS ABOUT HERSELF AND HER NOVEL THE ALCHEMIST DAUGHTER.

1) How did your interest in Tudor/Elizabethan history start? I was a science major in college and I never took history courses or a class on Shakespeare. I was interested enough so that later I familiarized myself with Shakespeare’s plays. I love the language of that period, the sly humor and I’m fascinated with how Shakespeare used words with multiple meanings. He often alluded to something entirely different from what you read at face value. Also, no other period in history had so many big personalities influencing politics and literature. There’s something for everyone in the Tudor era.
2) What kind of research did you do for this novel? I have a pile of reference books I consult. Years ago I bought The A to Z of Elizabethan London, a compilation of the Agas woodcut map of the 1560s. I love maps, I was hooked. I xeroxed every page and pieced it together and it hangs in my basement now. I can trace my characters through the streets and imagine what they saw.
I constantly check language with an etymology dictionary to be sure I’m not too far off with its first use. I’m a very slow writer because I check all kinds of stuff with every page I write. Things slip by though, and sometimes I slip in an anachronism (usually word usage) on purpose. My series isn’t meant to take itself too seriously. I want to get the feel and flavor right for the period. Take the reader for a ride.
3) What is next for Bianca? In book 2, Death of an Alchemist, (to be released in February), the sweating sickness makes an unwelcome return to London. Stymied to create a remedy, Bianca seeks the help of an alchemist. Ferris Stannum has just discovered the elixir of immortality. He intends to send his journal to Cairo for confirmation. The next day, he’s dead and his journal is missing.
Suspicious but unable to do much about it, Bianca returns home to find John has taken ill. When the journal mysteriously turns up in her room of Medicinals and Physickes, she dares to hope the journal could contain the secret to his recovery. But the journal arrives with great peril. Another alchemist is murdered and Bianca fears she will be next.
4) Tell us a little about your other works. I’ve written other manuscripts, but no series. My manuscript, In Longfellow’s Keep was selected out of 1200 entries to final in the Golden Heart contest in 2010. It’s about an Irish cook in the home of Henry Wadsworth Longfellow. Another novel, Krummen’s Index, is about a lonely book indexer living in Boston during the racial tumult of 1963.
5) What was your favorite book as a child?
The Wind in the Willows by Kenneth Grahame. The story and characters are so charming. There is something incredibly peaceful and wistful about the world Grahame created. Friends share their adventures and their foibles. It’s about a gentler time. I’ll never forget how content I felt as a child having it read to me.
6) What are you working on now?
I’m working on the first draft of book 3 in the Bianca Goddard series, titled Death at St.Vedast (I haven’t even announced the title on my website yet). The story will bring in some ‘citizens’—i.e. middle class merchants involved in the guilds. Bianca will venture outside of London for the first time and for those already familiar with my character, she gets to wear a dress that is above her station. This exposure to the higher class doesn’t sit well with her.
7) What is the best thing about being a writer? I am so grateful when a reader takes the time to write me. It’s a good feeling knowing that someone enjoys my writing. The worse? Mean-spirited reviews and not being able to respond to them.
8) What to you enjoy doing in your free time? I am finally learning to play the piano that I inherited from my father. I’m practicing the Moonlight Sonata, but of course it’s not the version with 5 sharps. When I don’t have a book project, I sew, I grow berries on our little farm, and read for fun. And, I spend more time with my grandchildren which is unbelievably terrific.
9) What are you reading now? I’m going to sound tiresome--A Tudor Companion, Women’s Voices in Tudor Wills, The Stripping of the Altars. Unfortunately I have little time for fiction at the moment.
10) Do you have a favorite quote you would like to share with us? Don’t think you can, know you can. I don’t know who said it, but I’m constantly second guessing myself even at this stage in my life. It’s a good one for me to remember. 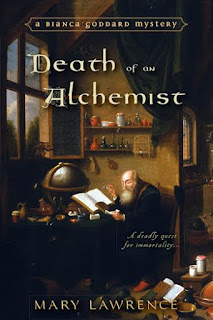 The Alchemist's Daughter by Mary Lawrence
My rating: 5 of 5 stars

breezed through this book very quickly, reading it in a matter of hours. At times the language did slow me down as the author added as much authenticity to the slang and pronunciations as possible without losing the reader in the process. I thought this was a nice touch and added more atmosphere and realism. Still, this is a very easy read, very different from the usual procedural type mystery making it especially fun to read. I am thankful this novel is a part of a series featuring Bianca because this book has made me a fan.
This review is the copyrighted property of Night Owl Reviews. To read the review in it's entirety please visit http://www.nightowlreviews.com 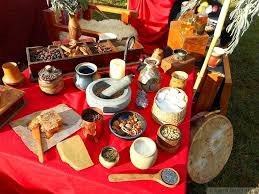 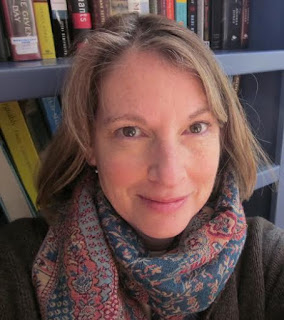 Mary Lawrence is the author of the Bianca Goddard Mysteries. Set in Tudor London in the final years of Henry VIII's reign, the new series launched with Book I, THE ALCHEMIST'S DAUGHTER, in April of 2015.

Originally from Evansville, Indiana, Mary attended Butler and Indiana University,moving to Maine after completing a degree in cytotechnology. She has worked in hospitals and labs and written indexes for several small publishers. Recently she started a berry farm in southern Maine with her husband. She is an avid reader of historical fiction and nonfiction and concentrates on Tudor/Elizabethan history.