No Place to Hide by Susan Lewis- A Book Review 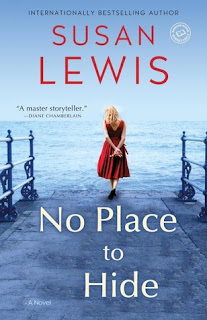 Susan Lewis, the internationally bestselling author of more than thirty novels, delivers her first novel set in the United States! Perfect for readers of Diane Chamberlain, Lewis is a master at evoking the emotional intensity of complex domestic dramas.

Fleeing England from a broken marriage, Justine returns to her grandmother’s hometown on picturesque Lake Maxinkuckee, Indiana. There she hopes for a fresh start, and a chance to heal her broken heart in the pristine lakeside surroundings. But an ocean may not be enough to protect Justine from the devastating secrets that drove her away, and the memories that continue to haunt her new life...

No Place to Hide by Susan Lewis
My rating: 5 of 5 stars

No Place to Hide by Susan Lewis is a 2015 Ballantine Books publication. I was provided a copy of this book by the publisher as a part of The LibraryThing Early Review program.

No Place to Hide is a powerful, emotional, and stunning novel.

I had no idea what to expect when I started the book but I was under the impression it was a suspense mystery novel. Well, it is that, but is also a riveting drama that held me in it's grip from start to finish.


“Hope is the thing with feathers

That perches in the soul,

And sings the tune without the words,

And never stops at all.

Justine has moved from England to Culver, Indiana, a place where her grandmother once owned a lake house. Justine remembers spending summers here as a child and is positive her deceased grandmother is compelling her to live in Indiana instead of settling down somewhere else.

Justine has been forced to begin her life over again with her three year old daughter, leaving her husband behind. She's changed her name, keeps her past a secret, confides in no one, not even her current best friend. She's constantly worried about the press, about someone finding out who she really is, she's jumpy, emotional, and seems very fragile.

But, why is Justine hiding? What is she running from? Why is she starting over and leaving behind a husband she obviously loves and misses dearly?

All we know is that Justine and Matt agreed that living separate lives was the only way their three year old daughter could have a normal life and that whatever has driven them to this unorthodox arrangement is something truly sinister.

Via flashbacks, we learn that Matt and Justine had a pretty charmed life for a while. They had purchased their dream home, were surrounded by good friends, were both happy with their careers, and had three healthy children. But, as the past begins to merge with the present the shocking truth will leave you shaken to the core.

The pacing in the first half of the book is slow, but tantalizing, as the author builds the suspense and mystery to a crescendo. I could not begin to fathom why Justine and Matt would take such extreme measures to protect their daughter, agreeing to avoid contacting one another even. Why were the media interested in them? I tried to puzzle it all out, coming up with a plethora of scenarios, but never, ever would I have guessed where the story was headed.

Once the shocking truth is revealed the second half of the story takes on an entirely new dimension as everything we learned before now makes sense. But, the atmosphere is so taut by that this time I was nearly breathless.

The secondary story in which Justine discovers some puzzling information regarding her grandmother, is paralleled to the situation Justine is in, certainly not to the same extent or context, but does add another layer to story that has it's own twist and surprises.

The themes explored in this novel are multi – layered, such as family secrets, running from the past, family bonds, parental mistakes, prejudice, cruelty, blame and guilt, but also the promise of forgiveness, a testament to power of love, of forgiveness, and of hope.

While there are other books that have tackled some of these issues, none have been presented in such a way as this, and I can not stop praising the author's ability to create such intense emotions, create doubts, touch on our worst nightmares, but still, despite such grim circumstances offer us a renewed hope and leave us with a sense of peace.

None of the characters in the novel will ever be the same, they will bear crosses all their lives, will have moments of confusion, pain, guilt, regret and remorse, will second guess all that came before and all that will come next, but these are remarkable people in unbearable circumstances who will no doubt soldier on and make the best possible future with what and who is left to build it with.

I was born in 1956, in Bristol.  My father was a Welsh miner, a poet, an engineer and a thinker.  My mother was one of 13 children who, at 20, persuaded my father to spend his bonus on an engagement ring instead of a motorbike.  We were a normal, happy, nuclear family, living in a spanking new council house on the outskirts of town – my mother’s pride and joy.  But we were going to do better, my mother had made up her mind about that.  My father, an unabashed communist, was writing a book, I was signed up for ballet, elocution, piano and eventually a private boarding school, and my brother, (the real great love of my mother’s life) was going to succeed at everything he set his mind to.
I was 9 and my brother 5 when my mother died of cancer.  She was 33, my father was 37, and he never married again.
I went to the boarding school, a rogue little pupil in amongst all the posh girls, with their plummy voices, rich parents and exotic tales of faraway places.  I yearned for my mother and father, but it was for the best, I was told.  My father couldn’t bring me up on his own.  However, I believed he could, and because no one would listen to my pleas for freedom, I took it upon myself to get expelled.  It took a while, and I had rather a fabulous time achieving it, and by the time I was thirteen I was back in our little council house with my father and brother.
The teenage years are too painful to go into.
When I was 18 I got a job at HTV in Bristol, and at 22 I moved to London to work for Thames.  I began as a secretary in news and current affairs, then trained as a production assistant and moved on to light entertainment and drama.  It was a love of drama, combined with a fierce ambition, that got me knocking on the Controller’s door to ask what steps to take to become a producer.  “Oh, go away and write something,” came the reply.  So I did.
Over 30 books later, my only regret is that none of them have yet made it to the screen.  I left TV eighteen years ago to do the “novelist thing” of buying a house with a swimming pool in the South of France.  Bliss!  For the first summer!  After that came a disastrous love affair with one of the FBI’s most wanted, the plunge of the pound, and the dawning realization that life full-time in France was very, very different to a two week holiday frolicking around on millionaire’s yachts on the sunny Riviera.  Sure it was glamorous, and the yachts – along with the interesting people – all came back in the summer, but the endless months in between were not far short of hell.
So, off to sunny California and Hollywood.  After equipping myself with a Mercedes estate for my beloved dogs Casanova and Floozie, a home in the hills complete with pool and perfect sunsets every night, I set about completing the obstacle course of cowboy agents, big-talking producers and wannabe directors.  Once I realised that Hollywood was NOT waiting for me, I put the struggle behind me and from thereon life in Tinsel Town became just plain thrilling.  From star-studded screenings and glitzy parties, to moonlit dinners on the beach and edgy nightclubs, it was the perfect town to be single.  George Clooney was my neighbour, Jennifer Anniston, Charlize Theron and Julianne Moore shopped in the same places, Nick Cage was a guest at my house, and Steve Martin was a regular on our dog walks.  Romances flourished and faded, some dreams came true and others were crushed.
After seven happy years of taking the best from Hollywood and avoiding the rest, I had to face up to the fact that I was losing touch with being English.  I needed a fix of my own country, so once again my dogs and I were on the move.  We returned to Wiltshire for two years where making the adjustment from Manolo Blahniks to Wellies, cocktails at sunset to nights in by the fire, and no more glittery invites to liven up the mail proved too crushing for a still young and lively spirit.
So, we returned to the South of France, not to the same village, but to an even prettier one than before, perched high above the Riviera with glorious views of the sea.  It was wonderful to be back amongst old friends, and to make so many new ones – the stress of living in a language that wasn’t mine was still an issue, but seemed slightly easier to deal with second time around.  Alas Casanova and Floozie both died aged 13 and 15 during our first few years there, but Coco and Lulabelle are doing a valiant job of taking over their places – and my bed!
Everything changed again three months after my 50th birthday when, having given up hope of ever finding the right man, I met James my now husband, who lived and worked in Bristol.  For a couple of years we had a very romantic and enjoyable time of it flying back and forth to see one another at weekends, but at the end of 2010 I finally sold my house on the Riviera and we are now living on the edge of the Cotswolds in a delightful old barn with Coco and Lulabelle.  James’s sons Michael and Luke are regular visitors;  it’s been quite exhilarating and educational having a young musician and dedicated sportsman in my life!
Should you be interested to know a little more about my early life why not try Just One More Day, which is a memoir about me and my mother.  The follow up book One Day at a Time continues the story with my father.

- See more at: http://susanlewis.com/index.php/about-susan/#sthash.MB6bnhwn.dpuf
Posted by gpangel at 12:30 AM