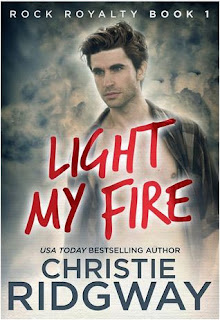 Years ago, Rolling Stone magazine dubbed the nine collective children of the most famous band in the world “Rock Royalty.” Now all grown up, the princes and princesses are coming back to L.A.’s Laurel Canyon to discover if love can be found among the ruins of a childhood steeped in sex, drugs, and rock ‘n’ roll.

One touch will start a fire…
World-weary band tour manager Ren Colson leaves his London business behind for a stay in Southern California, never expecting to wake up beside Cilla Maddox. Cilla Maddox—who in the years since their last meeting has turned sexy as hell. But she deserves more than a man hardened by long nights, dark roads, and too many faceless women.

One night will change her world…
Cilla Maddox not once imagined she’d see the bad boy of her dreams again. But then he’s sharing her air, her home, her bed. Though he claims he has no heart, she wants it to be hers. Can she convince him that the flames that leap between them might signify forever?

Light My Fire by Christie Ridgway
My rating: 4 of 5 stars

Light My Fire by Christie Ridgway is a 2014 publication.

Being “Rock Royalty” comes at a high price for the offspring of the super group “The Velvet Lemons”. The band members had lots of kids by different women, and bought a ranch/compound for them all to live together.

However, once they were of age they all scattered with the wind and seldom have any contact with one another.

The youngest child of this extended 'family' is Priscilla- aka 'Cilla'. Cilla has remained close to home, runs her own business and was especially close to a 'groupie' named Gwen, who had lived with them for a long time, and was the closest thing to a mother figure Cilla had. With Gwen's recent passing, Cilla is now responsible for going through her things.

This development, along the need for a break, Ren, who is now a tour promoter, returns to California and to the compound. Taken totally off guard by his appearance, Cilla must put up her defenses to ward of the old feelings she still harbored for Ren, her fantasy crush when she was younger.

Alone at the compound, Ren and Cilla become reacquainted, each seeing the consequences of their unorthodox upbringing. Cilla, was pretty much ignored and forgotten about by all the other kids, spending her youth alone, with no parental contact, or family bonds.

Ren, on the other hand was abandoned by his father due to his rock star lifestyle, exposed to things no young person should ever have witnessed, and then his mother took off, making it very clear she was not interested in being a parent.

Now Cilla is dealing with a blow to her confidence, in the bedroom, thanks to the callous words of her former boyfriend. The crackling chemistry Cilla feels when Ren is around creates a sexual tension between them that gives her an idea. Maybe Ren could be her sexual mentor?

This is a wonderful contemporary romance/ New Adult romance. Although the author pays homage to Jim Morrison and “The Doors” and their music, she doesn't glorify the rock star lifestyle, instead showing how the offspring of wild rock stars, who are in a state of arrested development, has had to deal with their unconventional parenting… or lack thereof.

In the beginning there were a few bumps in the road as I struggled with the introduction of so many characters and with getting the set up straight. But, once the story narrowed in on Ren and Cilla, it was smooth sailing.

While this story is very steamy when several really hot scenes, it was the character development that really sucked me in. Cilla despite her solitary existence makes an attempt to be up beat, but her issues manifest themselves in other ways, such as with some rather odd sleeping patterns.

Ren is definitely scarred and carries around a lot of bitterness, but deep down he longs for a real family. He is mature enough to see the damage Cilla suffered by being neglected as a child, but freaks out over his intense feelings for her with the usual “you deserve better” defense.

“Baby, I'm not good enough for you, okay?” he whispered, knowing she didn't hear him. “But, think of me...fondly, yeah? And I'll think of you always.”

Both characters develop well, but Ren is the one who has to step up in the end and he does so with a new perspective on life and love.

“It takes courage to create your own identity, to stop believing old stories about who your are or that limit who you can be.”

I enjoyed this short romance, liked the characters, the romance, and the happy ever after! I'm really excited to read the next book in the series.


GET YOUR COPY TODAY!  FREE IN THE KINDLE STORE!


PRICES SUBJECT TO CHANGE WITHOUT NOTICE!

Christie Ridgway is a California native and author of over forty-five contemporary romances. A six-time RITA finalist and USA Today bestselling author, she writes sexy, emotional reads starring determined heroines and the men who can't help but love them. She has a Career Achievement award from RT Book Reviews and twice has received their Reviewer's Choice award for best contemporary romance of the year. Married to her college sweetheart, Christie lives in Southern California in a house filled with boys and pets. She writes as an escape from sports equipment, football on TV, and dog hair.
Posted by gpangel at 12:00 AM