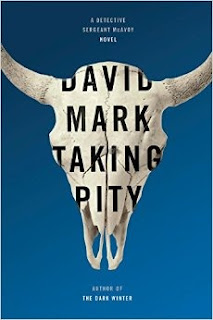 It’s been three months since a devastating tragedy ripped Detective Sergeant McAvoy’s life apart. Living alone with his young son in a temporary flat down the road from the charred remains of his family home, McAvoy has been on leave from work, just concentrating on making it through each day. The whole Humberside Police force has also been quietly coping with the loss of a few good officers—but crime in Hull is as relentless as the thunderous skies, and two warring criminal factions have been violently jockeying for position. While Trish Pharaoh and her Serious and Organized Crime Unit clean up bodies and search for answers, McAvoy reemerges to investigate police wrongdoing in a crime that was supposedly solved decades before. It’s meant to be an easy assignment to ease him back into the swing of things, but he is nothing if not thorough—and slowly but surely, evidence that has remained buried for half a century begins to implicate some of the most notorious criminals in Northern England. Frightening and fast-paced, Taking Pity is the latest page-turning installment in the thrilling Detective McAvoy series and by far the most personal one yet.

Taking Pity by David Mark
My rating: 4 of 5 stars

Taking Pity by David Mark is a 2015 Blue Rider Press publication. I was provided a copy of this book by the publisher and Netgalley in exchange for an honest review.

This is my first book by this author, which means I read, and am now reviewing the fourth book in a series, even though I have not read the first three books in the series.

Usually, that is no big deal for me, since I can normally piece together the inner workings of the recurring characters or figure out their past, by hints dropped along the way by the author. However, in this case there was a back story involving McAvoy and his family, that although I was clued in to some degree by being given the bare bones of the situation, I could never shake off the feeling I was missing out on some vital peace of information that would make the picture complete.

McAvoy is not working, his wife and daughter are out of his life due to circumstances beyond his control, and he is for all intents and purposes a single parent to his son, who is the only thing keeping McAvoy from tottering off the deep end. When Trish comes to him with a cold case involving a murdered family and man who has sat institutionalized for many years, this gives McAvoy the opportunity to get back to work. It may not seem like much, but it gives McAvoy something productive to work on.

In the meantime, the mob syndicate is going through a huge shakeup and a power struggle as ensued, with investigators being tempted to cooperate and many lives being effected, including the family of Aector McAvoy.

I love British crime dramas, especially those with a dark gritty atmosphere. My interest was really piqued by the cold case McAvoy was assigned, and the organized crime elements were very well written, giving the reader an up close and personal look at evil personified. The politics of organized crime is always compelling and strangely fascinating. Add the very heavy emotions of a man who has lost nearly everything near and dear to him, who is lost and floating in space, hurting intensely, needing answers to questions that remain elusive to the end, and the crime and investigations take on a more personal tone.

All of these elements added together is potent combination and I was very invested, but as a I mentioned earlier, I couldn't help but feel as though I was missing something everyone else was in on. The only thing to do now, is go back and locate the first three books in the series and see if that doesn't help clear things up. Of course with my review schedule, that probably won't take place for a long while. So, although it is ideal to read a series in order, that is not always feasible, however, I did understand what happened to McAvoy's wife and daughter, to some extent, that Trish made arrangements for them and until the situation with the organized crime unit is under control, McAvoy will continue to live in a nightmarish limbo, What I didn't get was what led up to all this, and since there were a few questions about McAvoy's wife's character, I had no way of knowing if they had merit or not. So, maybe a more in depth recap is in order, even if seems redundant, to remind people of what has transpired previously.

I got the distinct impression that up until now McAvoy has been a the star of the show, but, I don't have a feel for what he is like in normal circumstances, but it's clear that he's not working on all cylinders in this one, but he is apparently, quite a thorough detective and basically blows the lid off a case some people wanted to stay buried. But, his personal situation leaves the door open for other characters to evolve and I do believe Trish steps up to the plate in this one. Again, she is an enigma to me and I often wondered about her decisions and why she was involved in some delicate situations that involved McAvoy's family. Apparently, McAvoy will have to wait for all the answers to his burning questions. However, at the moment he is afforded a time of vast relief and will, at least for now have a modicum of peace. However, I get the feeling this story is far from over.

So, in conclusion, this is a very well written crime thriller with well drawn and defined characters, and although the book can technically be read as a stand alone, I don't advise it. Start with the first book and work your way up to this one. I think if you do that you will pick up on important nuances and have a much better understanding about what is going on with these characters. I recommend this book and series to those who enjoy British crime, dark crime dramas and police procedurals.
Over all, this one gets 4 stars 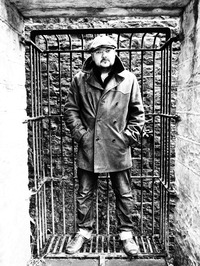 David spent more than 15 years as a journalist, including seven years as a crime reporter with The Yorkshire Post - walking the Hull streets that would later become the setting for the Detective Sergeant Aector McAvoy novels.

His writing is heavily influenced by the court cases he covered: the defeatist and jaded police officers; the incompetent investigators; the inertia of the justice system and the sheer raw grief of those touched by savagery and tragedy.

Dark Winter is his first novel, and has been followed by ORIGINAL SKIN and the most recently released SORROW BOUND out now in all good book shops.

He lives in Lincolnshire with his partner and two children and is now a full-time novelist.
Posted by gpangel at 12:30 AM

Email ThisBlogThis!Share to TwitterShare to FacebookShare to Pinterest
Labels: thriller