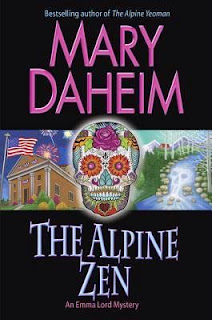 The picturesque town of Alpine in the foothills of Washington state’s Cascade Mountains—home to Emma Lord and her weekly newspaper The Alpine Advocate—has long charmed and enthralled mystery lovers. Now, with The Alpine Zen, Mary Daheim has at last reached the anticipated letter of Z. Her legion of avid armchair sleuths will relish this deliciously gripping novel.

As an early summer heat wave beats down on Alpine, Emma and her staff are treading very lightly. For unfathomable reasons, the paper’s House & Home editor, Vida Runkel, is in a major snit, refusing to speak to her colleagues, or even her boss. So when a peculiar young woman walks in claiming her parents have been murdered, and that she’s in mortal danger, too, it fits right in with the rest of the craziness. Then, to the utter bafflement of her colleagues, Vida vanishes without a word to anyone. And just when Emma and her husband, Sheriff Milo Dodge, start to unsnarl these tangles, a male body, dead too long to identify, surfaces at the town dump—making what seemed merely weird feel downright sinister. Has the hot weather driven everyone nuts, or are cold-blooded forces committing deadly misdeeds?

The Alpine Zen tingles with all the mystery and allure that only Mary Daheim’s brand of small-town life can provide. Gossip, love affairs, feuding, and plenty of dirty secrets make for an intriguing adventure every Alpine fan will want to read all about.

The Alpine Zen by Mary Daheim
My rating: 4 of 5 stars

The Alpine Zen by Mary Daheim is a 2015 Ballantine publication. I was provided a copy of this book by the publisher as a part of the LibraryThing early review program.

It's hard to believe we have gone from A-Z in the Emma Lord Mystery Series. While it seems to be a forgone conclusion that this book is the wrap up of the series, I hope that isn't the case. However, the story does seem to lean on the nostalgic side just a little and takes us down memory lane on a few occasions. The mystery was even kind of poignant.

A women calling herself “Ren” arrives in town claiming her mother, a one time Alpine resident, was murdered. Then a dead body is discovered in the dump, and while it may be a hippie, like it's suspected Ren's mother was, this is the body of a man. In the meantime, Ren has a breakdown of sorts and ends up in the hospital.

Emma's nose for news can't resist a good mystery, so she and Milo team up once again in their cute way to solve a mystery. But, if that weren't enough to keep them busy, it's seems Vida has finally cracked up and is in one long running foul mood from sun up to sun down, seven days a week... and the unseasonably hot weather is only making matters worse for all of them.

The mystery, while certainly puzzling, is not really the main focus in what could to be the last book in the series. However, some really shocking secrets are revealed involving some long time residents of Alpine.

Having settled into married life, Emma and Milo have perhaps moved out of the honeymoon phase a little bit, but their banter was as sharp as ever. It was wonderful to know that Emma is finally going to have some peace of mind in regards to a situation that has been the only stumbling block to her complete happiness and contentment.

The author reminds us in small ways of all Emma has gone through in the course of this series and it is so nice to see her finally settling into a stable relationship with most of the I's dotted and T's crossed. She is content and at peace I think, and although she and Milo often have conflicting agendas due to their perspective careers, they make a great detective team. So, even though we have worked through the alphabet- maybe the next title will have a number in it and those could go on for a finite amount of time- which would be fine by me. 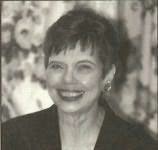 Seattle native Mary Richardson Daheim has been fascinated by story-telling since early childhood. She first listened, then read, and finally began to write her own fiction when she was ten. A journalism major at the University of Washington, she was the first female editor of The Daily where she attracted national attention with her editorial stance against bigotry.
After getting her B.A., she worked in newspapers and public relations, but in her spare time she tried her hand at novels. In 1983, Daheim’s first historical romance was published, followed by a half-dozen more before she switched genres to her original fictional love, mysteries. Just Desserts and Fowl Prey, the first books of twenty-three (with Scots on the Rocks set for the end of July) in the Bed-and-Breakfast series were released in 1991. A year later, the Emma Lord series made its debut with The Alpine Advocate. The eighteenth, The Alpine Scandal, was published in late March 2007. The Alpine Traitor is scheduled to come out in early 2008. Daheim has also written several short stories for mystery anthologies and magazines.
Married to professor emeritus and playwright David Daheim, the couple lives in Seattle and has three grown daughters. She has been an Agatha Award nominee, winner of the 2000 Pacific Northwest Writers Association Achievement Award, and her mysteries regularly make the USA Today bestseller list and the New York Times top thirty.
Posted by gpangel at 12:30 AM