Kilts and Daggers by Victoria Roberts- A Book Review 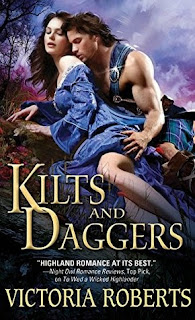 Ever since Lady Grace Walsingham discovered her uncle and sister are spies for the Crown, she has yearned for adventure. She's counting the days until she can leave barbaric Scotland behind, even if she must endure Highland captain Fagan Murray's company for weeks.

Fagan has a simple mission: escort the haughty Lady Grace back to England. But nothing is ever easy. The sharp-tongued woman needles him at every turn. But when a menacing threat follows them on their journey, Fagan's grudging tolerance for Grace turns to respect...and into a perilous attraction that could seal their fate

Kilts and Daggers by Victoria Roberts
My rating: 4 of 5 stars

Kilts and Daggers by Victoria Roberts is a 2015 Sourcebooks Casablanca publication. I was provided a copy of this book by the publisher and Netgalley in exchange for an honest review.

This is a delightful and fun historical romance with a little bit of English, a little bit of Scotland, a pinch of humor, a dab of spice, a handful of dangerous situations, spies and adventure, all mixed together, making this the perfect recipe for a highly entertaining story.

Grace is English through and through, has been gently bred and groomed to marry into nobility, but she's restless. Before she marries Daniel, her betrothed, she wishes to spend some time with her recently married sister in Scotland, and perhaps make a case for her entrance into the spy game, something her sister allegedly gave up when she married.

But, for now she must deal with the overbearing Fagan, a captain in his highland guard, who answers only the Laird, who is Graces' new brother-in-law. Fagan has been given the duty of being her escort and bodyguard, while Grace would rather her own Englishmen be assigned to her. Fagan infuriates her and keeps her flustered and agitated while in his presence, as he makes it quite clear he would rather be anywhere else but with her.

Will the two of them survive the journey to England without killing each other? Or will they have their hands full when they discover mercenaries are hot on their trail?

This is pretty light read, a story about two people who viewed the other as an enemy, but soon realized they didn't have to hate each other. They could look past the conflict between the English and Scotland and focus on each other, appreciating the qualities each possessed. Fagan was a super hot and sexy man in a kilt, and Grace was kind of spoiled and haughty at times, had a quick temper, and spoke without thinking first quite often, making me think everyone was right about her not being spy material. However, she rises to the occasion more than once and she grew on me in time.

There is nothing too emotional or deep here, just an action adventure type romance, which is a perfect way to escape reality for a while. 3.5 rounded to 4 Award-winning author Victoria Roberts writes Scottish historical romances about kilted heroes and warriors from the past. RT Book Reviews named her "one of the most promising debut authors across the genres," and she was also a 2013 RT Reviewers' Choice award winner for X MARKS THE SCOT.

Represented by Jill Marsal of the Marsal Lyon Literary Agency, Victoria is a member of Romance Writers of America® and several local chapters, as well as a contributing author to the online magazine CELTIC GUIDE.

Victoria lives in western Pennsylvania with her husband of twenty one years and their two beautiful children—not to mention one spoiled dog. When she is not plotting her next Scottish adventure, she's dragging her clan to every Scottish festival under the sun. Please visit Victoria at www.victoriarobertsauthor.com.