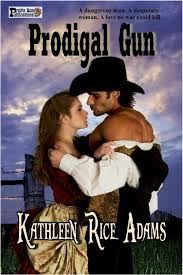 Rancher Jessie Caine buried her heart with the childhood sweetheart Yankees killed on a distant battlefield. Sixteen years later, as a Texas range war looms and hired guns arrive to pursue a wealthy carpetbagger’s agenda, Jessie discovers the only man she ever loved isn’t dead.


At least not yet.


Embittered by a brother’s betrayal, notorious gunman Calhoun is a dangerous man, come home to do an unsavory job. A bushwhacker’s bullet nearly takes his life on Jessie’s land, trapping him in a standoff between the past he tried to bury and the infamy he never will. One taste of the only woman he ever loved puts more than his life and her ranch in the crossfire.


With a price on his head, a debt to a wealthy employer around his neck, and a defiant woman tugging at his heart, Calhoun’s guns may not be enough to keep him from the grave. Caught between his enemies and hers, Jessie faces an agonizing choice: Which of her dreams will die?

Prodigal Gun by Kathleen Rice Adams
My rating: 5 of 5 stars

Prodigal Gun by Kathleen Rice Adams is a 2014 publication. I was provided a copy of this book in exchange for an honest review.

A true blue Historical Western Romance! Well, I have to say, they don't write 'em like this anymore, but boy I wish they would.

This is the story of Mason Caine, a man who rode off into the sunset to fight a war, but never made it back home. With a letter explaining his death, Jessie married Mason's brother, Will, and together they ran the Caine family ranch- The Eights.

Well over a decade has passed since Mason left for war. Jessie is a widow raising her daughter Lily and running The Eights herself. The last person she ever expected to encounter again was Mason Caine, a man she thought was dead. But, here he is again, literally collapsing on her land, and perhaps near death. But he isn't the same man she once knew. This man is hard, cold, mean, and dangerous. All the same, the ranch is still his, but so far he hasn't made steps to claim it. In fact, he's never fully explained why he returned to Texas in the first place.

What Jessie doesn't know is that Mason as an alter ego if you will, as the legendary gunman they call Calhoun. 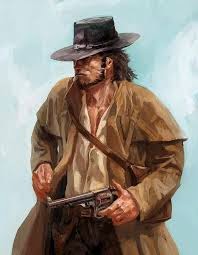 In the meantime, Mason will learn the truth about what happened all those years ago when he left for war and what happened with his brother Will, Jessie and the ranch. The fire that Jessie ignites in Mason never extinguished over the years despite the betrayal, the bitterness, and his hardened soul. Can they survive their enemies and forgive the past to forge a future together?

This book has everything in it you could possibly ask for... mystery, suspense, drama, action and an epic romance. Texas in the late 1800's is portrayed with authenticity and the atmosphere was like stepping into the real wild west. I loved the real and honest characterizations with the adults being flawed perhaps, but they behaved like real people and I could visualize them vividly. I absolutely loved the romance between Jessie and Mason, a love story than spans time and distance, hardships and misunderstandings and still lives on stronger than ever before.

I was impressed with Jessie's character, because being a woman alone in her time and place was hard, but she was strong, and stood up for herself on many occasions when men tried to run over her or suggested that because she was a woman she shouldn't be involved in discussions or decisions. This is also such a refreshing way to create a woman in a historical time period that the modern reader can relate to , but without the rhetoric or heavy handed reminders that the female protagonist is not a simpering damsel in distress.

I said this once a little while back and some folks picked up the line and used it in way that made me wonder if they were teasing me … but I do wish Western Historical Romance novels would make a comeback. I didn't mean to suggest the genre ever went away- what I mean by that is- it seems to me there aren't enough of them out there, ( add up the number or Regency period romance novels and compare those numbers to the amount of Western Historical Romances and you will see what I mean) and often I find that newer western historicals are more apt to depict a drug store cowboy type than a real cowboy or rancher. Mason was a strong rugged man, built up by his labor.. all the more sexy because of it... in my opinion. 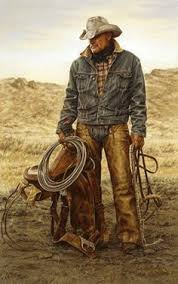 I have been craving a story that has character, depth, and meaning- a book that isn't afraid to address the harsher realities of times past , but is a touching love story at the same time.

It was actually kind of hard to step out of the old west and back into the present day. I wanted to stay with Mason and Jessie, watch Lily and Jason mature, and see what adventures they will be a part of in their future. It doesn't get any better than that. Well done!

Get a copy of Prodigal Gun here: 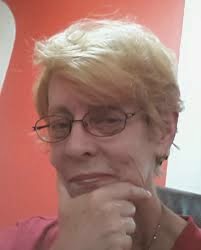 Kathleen Rice Adams is an author, award-winning journalist, and all-around troublemaker. Like the generations of ranchers, preachers, teachers, horse thieves, and moonshiners decorating the branches of her family tree, she hides out in Texas. Find her online at KathleenRiceAdams.com.
Posted by gpangel at 1:00 AM