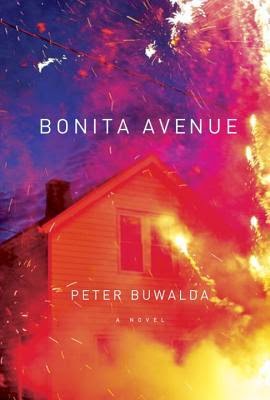 Siem Sigerius is a beloved, brilliant professor of mathematics with a promising future in politics. His family—including a loving wife, two gorgeous, intelligent stepdaughters and a successful future son-in-law—and carefully appointed home in the bucolic countryside complete the portrait of a comfortable, morally upright household. But there are elements of Siem's past that threaten to upend the peace and stability that he has achieved, and when he stumbles upon a deception that’s painfully close to home, things begin to fall apart. A cataclysmic explosion in a fireworks factory, the advent of internet pornography, and the reappearances of a discarded, dangerous son all play a terrible role in the spectacular fragmentation of the Sigerius clan.

A riveting portrait of a family in crisis and the ways that even the smallest twists of fate can forever change our lives, Bonita Avenue is an incendiary, unpredictable debut of relationships torn asunder by lies, and minds destroyed by madness.
MY REVIEW:

Bonita Avenue by Peter Buwalda
My rating: 3 of 5 stars

Bonita Avenue by Peter Buwalda is a 2015 Hogarth- Crown Publishing release. I was provided a copy of this book by the publisher in exchange for an honest review.

This book was originally published in 2010 and has been translated from Dutch into English. This is certainly one of the more unusual stories I have read in a while.

Siem Sigerius is the patriarch of a seemingly idealistic family. He has a solid marriage, two beautiful step- daughters, lives on a farm in the peaceful countryside, and is unbelievably successful at everything he has ever endeavored. He has dabbled in all sorts of things such as judo and being an university professor to politics. But, underneath the surface of this family lies a web of lies and secrets.

The fireworks explosion in Endschede in 2000 sets off a symbolic explosion within this troubled family. Janis and Joni are sisters, worlds apart in temperament. In this story, Joni ( ironically named afterJoni Mitchell), is the sister with the larger role. She is an object of desire for many men, but until the fireworks incident she is in a steady relationship with a photographer named Aaron. Aaron has a man crush on Siem and the two develop a strong friendship, sharing a love of jazz, and judo.

In the backdrop is the black sheep of the family, Siem's son from his first marriage. This angry and violent boy is ignored, forgotten, and locked away, hopefully forever, but of course he won't go quietly or easily from their lives.

The book explores almost every huge issue one could imagine, stirring them in one big melting pot. Eating disorders, incest, adultery, porn, murder, mental illness, and suicide are mixed together, but none of them come together cohesively. Joni, Aaron, and Siem are the characters whose point of view we are privy to. Joni is a strange woman, Aaron is jealous and unstable, and Siem has a multitude of issues he hides quite well from his family and colleagues. As the book drives toward the ultimate destination for these characters we get a glimpse inside their minds, their motives, their selfishness, manipulations, sins, regrets, and while moral on the surface, they are all pretty much morally bankrupt. Not a single character in this book was relatable. I don't think many of readers will find these people likeable or be able to find some common ground with them, which can be a deal breaker for some.
Sadly, the book just sort of rambles on and really needs to be edited down... a lot. It is nearly 600 pages long and somewhat disorganized. If you are not reading along slowly and paying very close attention, it would be easy to get lost or confused because the book flashes back in forth in time and in various locations.
This book is not exactly the most uplifting of stories either and if you are looking for a happy ever after, all wrapped up neatly sort of thing, who won't get that here, but it is an interesting psychological expose on the dysfunctional family and how utterly shocked we would all be if we were given access into minds and hearts of those who appear so blessed and stable on the outside. The human condition is placed under the bright spotlight and is found wanting. If you stick it out with this one, and I think many will find that a monumental task, you will come away with some heavy thoughts and opinions, and that says something about the book. If you think about it after you are done reading it, then you must admit it made some kind of impression on you, good or bad. I have to say the book was too depressing for my taste, and it does need some work, at least for us English speaking readers. Still, one can see the talent is there and if nothing else I can appreciate that effort. Overall 2.5 rounded to 3.

Peter Buwalda is a Dutch writer. He was a journalist and an editor at several publishers. He was co-founder of literary music magazine Wah-Wah and wrote stories and essays for De Gids, Vrij Nederland, Bunker Hill and Hollands Maandblad. In September 2010 he made his debut with the novel Bonita Avenue. It received a magnificent reception and became a bestseller. It was awarded the Academica Debutantenprijs, the Selexyz Debuutprijs and the Tzumprijs and was nominated for nine awards including the AKO Literatuurprijs, the Libris Literatuur Prijs, the KANTL Proza Prijs, the NS Publieksprijs and De Gouden Strop 2011.

The translation rights were sold to countries such as Germany, Spain, Italy and France.