THE WIZARD OF OZ FAQ - BY DAVID J. HOGAN 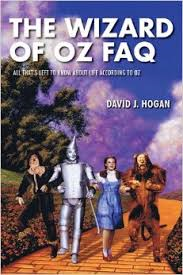 (FAQ). The Wizard of Oz FAQ is a fact-filled celebration of the beloved 1939 fantasy masterpiece starring Judy Garland. It's all here from L. Frank Baum and his Oz novels to the complete background story of the movie's conception, development, and shoot, with special attention given to the little-known parade of uncredited directors, casting difficulties, and on-set accidents and gaffes, as well as more than 75 sidebars devoted to key cast members, directors, and other behind-the-scenes personnel. You'll find a wealth of fun facts: How MGM overworked Judy Garland before, during, and after Oz; why director Victor Fleming had his hands full with the Cowardly Lion and Dorothy's other friends; what it was about Toto that really bothered Judy; the physical horrors of filming in Technicolor; the racial Oz gag that was scripted but never shot; when the Wicked Witch was going to be beautiful; why The Wizard of Oz owes a lot to silent-screen star Mary Pickford; the story of deleted scenes, and a full two weeks of shooting that had to be scrapped; why MGM star Mickey Rooney was part of the movie's traveling publicity blitz; how the Wicked Witch was literally blown off her broomstick one day; the place where lions, tigers, and bears really do live together; singers you hear but never see; the day MGM fired Judy Garland; and much more. Just follow the yellow brick road!

The Wizard of Oz FAQ: All That's Left to Know about Life, According to Oz by David J Hogan
My rating: 4 of 5 stars

The Wizard of Oz FAQ, All That's Left to Know About Life, According to Oz by David J. Hogan is a 2014 Applause and Theatre & Cinema Book Publishers release. I was provided a copy of this book in exchange for an honest review by the publisher and Netgalley.

“If I ever go looking for heart's desire again, I won't look any further than my own backyard, because if it isn't there, I never really lost it to begin with.”

Like the other books in the FAQ line, this one explores little known facts and is much more than a trivia book. It is not a book of list, although there are a few list toward the end of the book, nor is it a biography. Each section is organized and puts the spotlight on the screenplay, it's writers, the set design, the costumes, the make up, the musical scores, a brief history of Frank L. Baum, a brief history of the MGM studios, the director, The Munchkins, mishaps on the set, and the now infamous aluminum poisoning of Buddy Ebsen due to the make up he wore as the Tin Woodman. There is a brief bio of each main cast member, even the dog who played “Toto”.
While most everyone I know has seen this treasured movie many, many times in their lives, most have not filled their heads with every single detail of the film, albeit there are no doubt many out there who are officiandos on the subject, most of us have a basic knowledge of the actors, the soundtrack, and perhaps have believed a few odd ball rumors here and there. It was very interesting to read about the cast, how they obtained the role, what other parts they played and what direction their lives took after the Wizard of Oz. The fact that the movie only Oscars in the music category, but did receive several nominations, the differences between the books and the script, how the music was incorporated into the movie, the revolving door of directors, the imaginative creation of the “twister”, which you have to remember, was done way before computer generation, and was so costly it was used in other films as well, and the list of what each actor was paid for a week's work, “Toto” being paid more than some people, and countless other pieces of information on how this movie all came into being.
The only problem I had with this book was the author's tendency to go off topic on occasion. While explaining the academy award nominations and OZ's competition, he went into great detail about the other films. He also went into too much detail regarding behind the scenes crew members and what other films they worked on. It is always a fine line when writing this type of book because the author certainly doesn't want to rehash information we have all heard countless times before, but at the same time he wants to keep obscure facts from being too boring or going off in a direction away from your main topic. Occasionally, the chapters and subjects overlapped and information was repeated more than once.
However, I found most of the discussions about the psychology of the story interesting, and I will readily admit that although I am a huge fan of both the books and the movie, I really didn't know all that much about how the movie was made, the detail that went into the costumes and make up, and countless other very interesting details about the actor and actress in the movie.
In what other countries was the movie released in and when? How many reissues have there been? What is the psychology behind story? What other Oz inspired movies and television programs have been made throughout the years? What about all those rumors of a suicide on the set?
The list of bloopers was also fun and made me want to take out my DVD and watch it with this list in hand to see if I could catch the mistakes.
Overall, this is an interesting collection of facts regarding one of the most beloved movies of all time. The author did a great deal of work and research on the book and brought up some interesting food for thought. There are some photographs sprinkled through out the book, some are color and some are black and white. If you think you know everything there is to know about the movie, then I challenge you read this book. I am positive you will discover some things you didn't know before. If you are like me and have enjoyed the movie, mostly taking it at face value, and have never considered delving into the many facets of the film, you will certainly find this book of interest. 4 stars