AN HEIRESS FOR ALL SEASONS BY SOPHIE JORDAN- A BOOK REVIEW 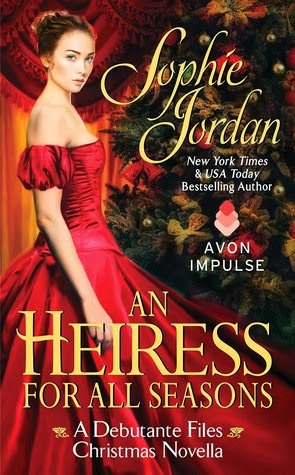 When a holiday blizzard brings together a pair of reluctant lovers, the result threatens their reputations … and may cost them their hearts.

Feisty and independent American heiress Violet Howard swears she'll never wed a crusty British aristocrat. Will, the Earl of Moreton, is determined to salvage his family's fortune without succumbing to a marriage of convenience.

But when a snowstorm leaves Violet and Will stranded and alone, their sudden chemistry will challenge good intentions. Seized by a desire that burns through the night, they'll toss reservations aside in favor of the heat found in each other's arms.

Will their passion survive the storm? Will they realize they've found a love to last them through all seasons

An Heiress For All Seasons by Sophie Jordan
My rating: 4 of 5 stars

An Heiress for all Seasons by Sophie Jordan is a 2014 Avon Impulse publication. I was provided a copy of this book for review purposes by the publisher and Edelweiss.

I love holiday themed books. This is a charming novella set during the Christmas season which tells the story of Violet, an American heiress being shopped by her mother in hopes of marrying her off to a titled gentleman.

When Violet developed a crush on her father's man of business , her parents decided it was time to move Violet into the circle of people they wanted her to marry into. So, she finds herself in England, the guest of Lady Peregrine, the Countess of Merlton for the holidays. The Countess needs her son, Will to marry an heiress and so the plotting begins.
Will has had his fair share of opportunities in the past to wed an heiress, but none have managed to tie him down... until he meets Violet. Violet is unlike all the others. She really has no interest in marriage to a titled man. What she wants more than anything it for someone to love her for who she is and not for her money. So, she begins a cat and mouse game with Will. He chases, she runs. But, when a competitor arrives at the estate, Violet begins to have second thoughts.

I loved Will! He was simply dreamy. Violet got on my nerves just a little, but I could see where she would want to be cautious. After all, who wants a life time of misery in a loveless marriage? I thought the match was a good one and despite all the machinations by the parents, these two will stand on solid ground together because money and titles are not what makes the world go around for them. This story will make an a nice addition to your holiday reading. 4 stars 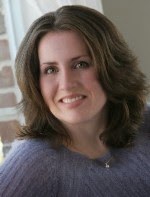 ABOUT THE AUTHOR:
Sophie Jordan took her adolescent daydreaming one step further and penned her first historical romance in the back of her high school Spanish class. This passion led her to pursue a degree in English and History.

A brief stint in law school taught her that case law was not nearly as interesting as literature - teaching English seemed the natural recourse. After several years teaching high school students to love Antigone, Sophie resigned with the birth of her first child and decided it was time to pursue the long-held dream of writing.

In less than three years, her first book, Once Upon A Wedding Night, a 2006 Romantic Times Reviewers' Choice Nominee for Best First Historical, hit book shelves. Her second novel, Too Wicked To Tame, released in March 2007 with a bang, landing on the USA Today Bestseller's List.
Posted by gpangel at 12:00 AM