AN AMERICAN HOLIDAY BY BOBBI ROMANS- A BOOK REVIEW + GIVEAWAY 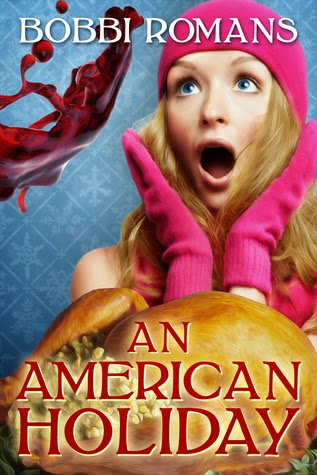 Ahh, Thanksgiving… complete with ghosts of holidays past. Those being humiliating memories of last year's revelry gone wild: jail cells, a tattoo and rose left on Kristi James pillow by someone she can't remember. Toss in two brothers who, while loving, had needled her with vivid imagery on what might have happened during that fateful rendezvous at the local HoJo's. Seriously, what's a girl to do?

She'd run like hell from Harpers Ferry back to her apartment and job in Alexandria. She's praying this year's holiday ends a bit more traditional. But between exploding turkey's, cranberry fights, and the winter storm threatening to lock them all together for God only knew how long, she's fairly certain her Norman Rockwell hopes have flown the coop.

Adding another layer to this casserole of disaster, the high school boyfriend—who'd cheated on her two days before prom—returns, claiming to have made a horrid mistake all those years prior. Amid all this, what has her heart flip-flopping is catching her best friend Simon getting cozy with his latest girlfriend.

Thing is, she isn't sure why its bothering her so badly.

Sometimes it takes coming home again... to discover how lost we’ve really been.

An American Holiday by Bobbi Romans
My rating: 4 of 5 stars

An American Holiday by Bobbi Romans is a 2014 Independent publication. I was provided a copy of this book in exchange for an honest review.

This is a delightful holiday story full of all the angst family can represent, especially if you haven't been home for awhile. Kristi is returning to her small hometown trying to brace herself for the onslaught of memories, or in one particular case, a lack of memories. Her two brothers, Ethan and Max are typical brothers, annoying and protective. A Norman Rockwell family, they are not. But, they aren't a big problem, really. It's just that her old high school boyfriend, Jackson, has moved back to town and he is trying to rekindle their romance, after he cheated on her with one of her best friends. Another problem is Simon, Kristi's BFF. It would appear he has a new girlfriend and for some reason this really bothers Kristi.

“I watched my pop in silence, as he continued to surprise me. As quirky as my family may be, we had each other's backs. Always would, and nothing in life could ever change that.”

The Thanksgiving holiday for once, is in the forefront of this madcap and heartwarming, often hilarious story of family, friendship, and romance. Kristi will learn to stop running from her past, will find out a few interesting details about her parents she had never considered before, and will finally solve a mystery that has had her on edge for a long time. Most importantly, she will learn who the right guy for her really is after all these years. I laughed out loud in some places and felt all warm and sappy in others. There is no super heavy drama or tragedy, nor is it some great literary classic, it's just a light, very quick read, perfect for heading into that wonderful and uniquely American holiday season. I had a lot of fun reading this one and it left me with a smile on my face. 4 stars

BOBBI WILL GIVEAWAY ONE  E BOOK COPY OF  AN AMERICAN HOLIDAY TO ONE RANDOMLY CHOSEN COMMENTER.


Author Bobbi Romans is as quirky as her works tend to be. She’s been on a talk show, the cover of the Walt Disney Souvenir magazine, married two couples and has a football team sized family.
Born and raised in VA she now resides in the south where she taps away her next story...which much like her life, she never knows where its heading.
She’s all over the net so following along her whacky trail in life isn’t hard.
If you can’t find her on Facebook, Twitter or her Bobbi Romans YakPad you can always scope out her latest deets at her website...
WWW.BOBBIROMANS.COM