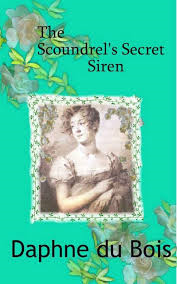 The Scoundrel's Secret Siren by Daphne du Bois
My rating: 5 of 5 stars

The Scoundrels Secret Siren by Daphne du Bois is a 2013 Daphne du Bois publication. I was provided a copy of this book by the author in exchange for an honest review.

This delightful and charming regency period romance tells the story of Lorelei, an adventurous soul nearly bored to death staying in the country while her father is away. Hearing a tragic tale of lost love with resulted in several ghost sightings, Lorelei decides to sneak out in hopes of catching sight of the fabled apparition. Well, instead she encounters Lord Winbourne and the two have a brief encounter in which each was unable to really see the other due to the dark night and Lorelei wearing a veil. When Lorelei realizes she no longer has her pendant she knows Lord Winbourne must have taken it. In the light of day, meeting in some of the same social circles, Lord Winbourne is very different. He is cold, calculating and appears to have the worst possible reputation as a scoundrel. Despite that, Lorelei is determined to get back her moonstone pendant and finds herself learning more about Winbourne as a result. Is there more to the notorious ladies man than meets the eye or he is man Lorelei should avoid at all cost?

This is truly a traditional regency romance in the Jane Austen style of story telling. This book is well written and the dialogue is super. I just loved the banter between Winbourne and Lorelei. It snaps, crackles and pops. The story is light with no real heavy angst or drama plus there is an intertwining storyline that serves as a tiny secondary romance. It's just a sweet love story with a very slight hint of sensuality. I have no complaints with this one. 5 stars. 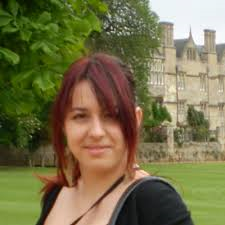 Daphne has always had a passion for literature and history and one day it occurred to her: what better way to use her English Literature degree than to write the kinds of stories she loves to read? She hasn’t looked back since.
Daphne also writes lyrical fantasy under the pen name Emily de Courcy, and who knows where she'll branch out next!

Daphne has stacks of notebooks full of stories that still need to be written, which she insists on bringing with her when she moves around the world (she’s done this a lot!). She likes her books full of romance, magic, adventure, witty repartee and a dash of silly humour. When Daphne isn’t writing, she can be found painting, picnicking, reading and listening to all sorts of exciting music.
Posted by gpangel at 1:00 AM