ON HER FATHER'S GRAVE BY KENDRA ELLIOT- A BOOK REVIEW 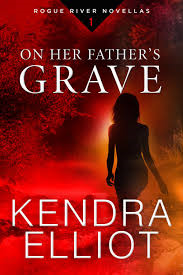 In a small town like Solitude, Oregon, keeping a secret can be murder.

Stevie Taylor had left her sleepy Oregon hometown for a more exciting life. But after her police chief father passes away, the LAPD cop returns to Solitude and signs on as a patrol officer, hoping to heal from her loss…and from the horrific things she’s seen in the city.

In Solitude, everyone knows everyone else’s business—and, to Stevie’s dismay, local gossip soon ties her to the new police chief and a man from her past. Tragedy then shakes up the small town when a teenager dies after taking a strange new drug. Now, the seasoned LA cop must hunt down the dealer while investigating the most important case of her life, one that could divide her tranquil town.

The first of four thrilling Rogue River novellas, On Her Father’s Grave launches a new romantic suspense series from Kendra Elliot and Melinda Leigh.
MY REVIEW:

On Her Father's Grave by Kendra Elliot
My rating: 4 of 5 stars

On Her Father's Grave by Kendra Elliot is a 2014 Montlake publication. I was provided a copy of this book by the publisher and Netgalley in exchange for an honest review.
This is the first book in the Rogue River series.

This is a short story/novella which introduces us to the characters and small town atmosphere of Solitude, Oregon where Stevie Taylor grew up. With the death of her beloved father, Stevie has returned home after having lived in L.A.
She is hired onto the small town police force and finds there have been a few changes. For one, the new police chief is a man named Zane, and he is not a local, which surprises Stevie. She finds a few members of her family are perhaps in crisis mode, and a popular high school student's sudden death is raising some very disturbing questions.
I have just recently discovered this author and I can tell you I plan to devour everything she writes. I think this story made a good segueway into what promises to be an interesting new series. There are always dark secrets lurking in small towns, there could be plenty of family drama, and of course there will definitely be some steamy romance with Zane and Stevie. I am super excited about the series. This one gets 4 stars

View all my reviews
Posted by gpangel at 2:00 AM