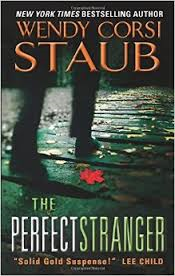 The Perfect Stranger by Wendy Corsi Staub
My rating: 4 of 5 stars

The Perfect Stranger by Wendy Corsi Staub is a 2014 Harper Collins publication. I was provided a copy of this book by the publisher and Edelweiss for review purposes.

It's hard to imagine a diagnosis of cancer, a struggle to remain optimistic, especially around your family and close friends. Having someone to talk to who you can really, really open up to and speak freely with are those who are going through the same thing you are. Meredith found a group of wonderful ladies to blog with about their breast cancer battles. But, when Meredith dies suddenly the ladies are stunned to learn it wasn't the cancer, it was a home invasion robbery. Their online friend was dead because of a blow to the head. Now everyone is under the microscope as the police try to determine what really happened.

After forging such a close bond with one another, the ladies feel compelled to gather face to face to pay their respects to Meredith. Landry appears to have the most stable home life of the other women and when she travels a long way from home to attend the funeral, she can't get her husband's warnings about online scams and predators out of her head. But surely none of these cancer survivors would be a killer?

This story is suspenseful and has more suspects than you have thought. It was also a very emotional story as we are given insight into the private thoughts these women have as they go through the shock of discovering they are sick, to deciding what treatment is best, to coping with everyday life issues. These women bonded in such a special way it was hard to see that nearly destroyed because they became so paranoid about each other and felt they couldn't trust their special online friends. Naturally, there were those close to the victim who needed to be looked at as well. So, the guessing game never stops. In the course of a murder investigation the police must probe into the personal lives of the victim and those closest to them so there were some secrets exposed, and this causes more suspicion . I did enjoy the story, there was some things that happened which would make this a good book club read. Occasionally the story stalled here and there and sometimes I had trouble with the online names and real names. I can't go into details but I was really disappointed in some people in the story no matter what their intentions were . I don't think the good outweighed the bad on that front, but at least something good did come out of something bad. (if that makes any sense) I was happy to see the victim's family get some peace and hopefully some of their personal problems will be resolved so that they can live a happier life in the future. This one is a 3.5 rounded to 4 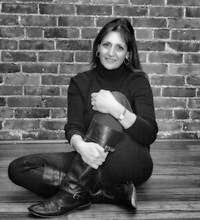 New York Times bestseller Wendy Corsi Staub is the award-winning author of more than seventy-five published novels and has sold more than four million books worldwide. Under her own name, Wendy achieved New York Times bestselling status with her single title psychological suspense novels. Those novels and the women's fiction she writes under the pseudonym Wendy Markham also frequently appeared on the USA Today, Barnes and Noble Top Ten, and Bookscan bestseller lists.

Wendy’s latest suspense novels for Harpercollins are linked by a social networking theme and include THE GOOD SISTER (Harper, October 2013), which has been optioned for television by Fox, as well as the prequel novella, COLD HEARTED, for the upcoming summer thriller, THE PERFECT STRANGER (July 2014) and THE BLACK WIDOW (2015). Earlier in 2013, she concluded a bestselling, award-winning trilogy that was launched by Harpercollins in September 2012 with NIGHTWATCHER, which won the 2013 Westchester Library Association Washington Irving Prize for Fiction. It was followed in October by the New York Times bestselling SLEEPWALKER, which went on to become a finalist for the prestigious Simon and Schuster Mary Higgins Clark Award presented at the Mystery Writers of America Edgars Symposium in April 2013. The trilogy’s final title, SHADOWKILLER, was released in February 2013.

Wendy’s thriller LIVE TO TELL (Avon Books, March 2010) received a starred review in Publishers Weekly and was also a finalist at the 2011 Mystery Writers of America Edgar Awards for the Mary Higgins Clark Award. The sequel, SCARED TO DEATH, (Avon Books, January 2011) was honored with the WLA Washington Irving Prize for Fiction and the trilogy concluded with the bestseller HELL TO PAY (Avon Books, October 2011).

She contributed a short story, "My Father's Eyes," to the FIRST THRILLS anthology edited by Lee Child (Forge, June 2010).

Wendy won the 2008 RT Award for Career Achievement in Suspense and the 2007 RWA-NYC Golden Apple Award for Lifetime Achievement. A proud recipient of the RWA Rita award, she has also been honored five times with the Westchester Library Association's Washington Irving Prize for Fiction and was recognized as one of WLA's Millennial Authors in 2000. Her Wendy Markham novel SLIGHTLY SINGLE was named one of Waldenbooks' 100 Best Fiction titles of 2002. Her novels SLIGHTLY SUBURBAN, THE LAST TO KNOW, and ASK ME AGAIN were nominated for RT Reviewers Choice awards, and five of her novels, DON'T SCREAM; THE LAST TO KNOW; MIKE, MIKE AND ME; HELLO, IT'S ME; and BRIDE NEEDS GROOM, were awarded a month's top pick review by the RT BOOK club magazine.

Her work has been translated into more than a dozen languages worldwide and her titles are regularly selected as features for Mystery Guild, Literary Guild, Doubleday Book Club, Large Print Book Club, and Rhapsody Book Club.

Wendy grew up in a large, close-knit family in rural southwestern New York State and decided she wanted to become an author while in third grade. She worked in two independent bookstores during college, then moved alone to New York City at 21 to pursue her dream. After stints as a book editor for a Manhattan publishing house and an account coordinator for a major advertising agency, she sold her first novel, the supernatural young adult thriller SUMMER LIGHTNING. Early in her writing career, she published in various genres including suspense, horror, historical and contemporary romance, television and movie tie-in, and biography.
Posted by gpangel at 2:00 AM