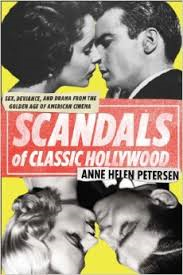 Scandals of Classic Hollywood: Sex, Deviance, and Drama from the Golden Age of American Cinema by Anne Helen Petersen
My rating: 3 of 5 stars

Scandals of Classic Hollywood by Ann Helen Peterson is a 2014 Plume publication. I was provided a copy of this book by the publisher and Edelweiss in exchange for an honest review.

As I began reading this book it struck me that one of the worst scandals portrayed here was the Fatty Arbuckle scandal which occurred in the silent film era. This the story the author started out with. The more I read the more I had to remind myself that back in the 20's , 30's, 40's and 50's these Hollywood icons were indeed committing huge scandals by having extramarital affairs, abortions, multiple marriages and divorces and drug use. Before the 1960's Hollywood played up the glamor and insisted on morality clauses. What was not common knowledge was how very powerful the studios were . MGM was quite successful at covering up some really big scandals and were also instrumental in the complete meltdowns of some of it's biggest and most loved stars. These stories are all very familiar but the author did an admirable job of telling these stories in such a way that they seemed fresh.

Many of these stories are just plain sad. Dorothy Dandridge and Judy Garland both died in the their forties of drug overdoses. Both were victims of the system , of the powerful studios and the men in their lives.
The gossip columnist were also willing to play along with the studios in a tit for tat way. They would go along with whatever story the studios came up with or would look the other way if they were tossed juicy information in return. The studios had their own physicians who covered up things or helped to enable addictions or arranged abortions. In one instance they even convinced an employee to take the blame for an actor's crime, including jail time!
I think the main problem with a book like this being published now is that most of us are so jaded by the antics of today's celebrities, these scandals are not even scandals. They seem rather tame in most instances and so I am not sure how fascinating these stories will be for some. I did find myself looking up YouTube videos of Mae West, and Jean Harlow and was interested in some of the historical information on these ladies who were way ahead of their time.
Hollywood was no different really in those days, it was just handled better and differently so that the image was kept in tact. These days scandal sells and celebrities seem to almost embrace it. I have on occasion mourned the old Hollywood glamor and the false face celebrities put forward leading the naïve public to believe the actors and actresses were living upstanding and moral lives and were genuine and humble. The illusion created was amazing when you think about it. Even when stars behaved badly the way it was spun for the public kept the star's image in tact and although one's neighbor was divorced and now shunned because of it, it was OK for Clark Gable to marry and divorce or Humphrey Bogart to divorce and then marry a much younger woman.

One thing though remained a huge secret and that was homosexuality. Many stars during these years were open within the Hollywood circle while others never admitted to anything. If the truth had ever come out that really would have been a scandal in those days, since many were sex symbols. Again, the studios were on top of it even though there were a few close calls.

Again, by today's standards most of the stories here are not shocking or a scandal or controversial. If I had not heard most of these stories so many times before the history alone would have been interesting reading. For me personally I found the book to be more or less a rehash of common and well known facts about the celebrities featured. The book did have me thinking about some of these stars for the first time in a long while and I think I will spend a little time looking up their old movies and enjoying their performances on screen, so although I didn't really learn anything new from reading this book, it did spark a renewed interest in the movies and stars of the years prior to the drastic changes that took place in the 1960's
For those who are not familiar with this era, this would be a great book to start with. You might find it interesting to compare those days to the times we live in now. Actresses were still required to “reduce” and race is still an issue for those looking for mainstream roles. While major strides have been taken in the right direction over the years, there are still old Hollywood standards that remain alive and well.
Over all this one is 3 stars.