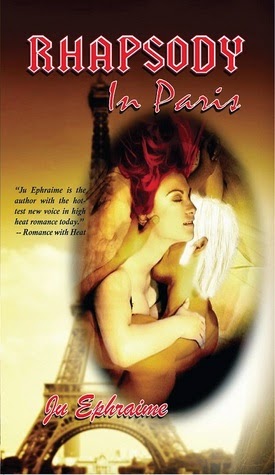 Rhapsody in Paris by Ju Ephraime
My rating: 4 of 5 stars

Rhapsody in Paris by Ju Ephraime is a 2014 Envision publication. I was provided a copy of this book in exchange for an honest review.

This a the story of a the whirlwind romance of Franchesca and Damon. For Franchesca it's a literal meaning to falling in love. While jogging she falls and Damon comes to her rescue. A mix up at the hospital puts Franchesca in Damon's care until she recovers enough to get around on her own.
Damon is quite well off and had a full staff on hand to cater to Franchesca's every whim. But, Damon is fighting off a massive attraction to this woman he had only just met and the feeling is mutual. However, Damon has some baggage to unpack before he can embark on a relationship with someone and this could break the couple apart before they ever really got off the ground.

This story is like a fantasy we have all indulged in from time to time. A change meeting, an instant attraction, Paris, and the security of living a comfortable and safe life with the man you have always dreamed of . .
While the couple had a few hurdles in their way, they are able to put the past behind them and forge a future together. Damon in particular deserves this as he has been treated very badly in the past.
There were a few plot issues here and there that should be tweaked unless there are some processes you don't have to go through is some countries that you do in most areas of America. But, it was as I said before , a glamorous fantasy that is simply dreamy. I enjoyed being carried away to the most romantic place you can imagine and living vicariously through Franchesca.


This is the last book in the LaCasse series, but this can be read as a stand alone. Ju Ephraime is known for her “high heat” romance. If you like deeply romantic and sensual/spicy novels this one is worth checking out. 3.5 stars- ( rounded to 4 stars for GR and Amazon)

Ju Ephraime has a  campaign on Thunderclap right now.   Here is the link to follow to support Ju. It's easy to do and there is no spam mail.  Just share on your social media and that's it.  There is a contest too, you won't want to miss out on.  Don't miss !!