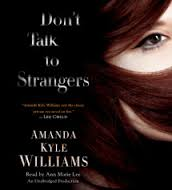 Don't Talk to Strangers by Amanda Kyle Williams
My rating: 5 of 5 stars

Don't Talk to Strangers by Amanda Kyle Williams is a 2014 Bantam Publication. I was provided a copy of this book by the publisher and Edelweiss in exchange for an honest review.

If you like a good thriller, or police procedural, or just a good old whodunit, or a gritty crime story, this is book is not to be missed. Keye Street is a character that defies the traditional detective stereotype and gives us a human being with frailties, complications and too many internal battles to name. When she loses her job for being an alcoholic, she cleans up her life, has a relationship and works as a consultant on the side while running a private detective and bail recovery agency.

“ I watched him get in his car. As soon as the the engine started. I hightailed it through the yard and up the sidewalk to mine, a dingy Plymouth Neon with a dent in the hood.- you don't want to spy on a guy who restores vehicles for a living in something flashy. So, my white on white 1969 Impala convertible was at home in the parking garage. Missing me, I thought warmly. I'd had it since high school. And my mother says I can't commit.”

When she gets a call from the sheriff of a small town in Georgia called Whisper, appropriately enough, she begins the hunt for a sadistic sexual predator who has killed to two young thirteen year old girls. Immediately we are swept into the sultry backwoods of Georgia where ten years ago a girl went missing and the case went cold. Now another girl as gone missing, only this time they not only find her body but the body of the other missing girl not too far apart in a little known backwoods area mainly used for hunting and fishing.

Upon arrival in Whisper, Keye who is of Chinese descent, is beset by suspicions and outright rudeness by the the Sheriff's staff and the residents of the small town. But, the sheriff has no such feelings about Keye. In fact he seems to really like her a lot. Keye is confused about her reaction to the man. After all she is in a committed relationship and with her past issues the last thing she needs is more upheaval.

“ We walked for a couple of minutes. I could hear the rustle of this uniform, his breathing, feel his hips lightly bump into me as we walked. And I felt all those dueling emotions, too-- exhaustion, excitement at new evidence, sadness at what the evidence meant, guilt at my attraction to a small town sheriff, and astonishment that the physical pull of his body so close to mine was enough to stir me even in the middle of an investigation. Nothing an addict's brain enjoys more that a little inner chaos. It's like jet fuel. Those pathways had been carved out years ago, and they opened up wide for just about any emotional roller coaster ride I wanted to take. But what rose to the top was sorrow. I felt sick over Skylar, worried, bombarded with images of other victims, dozens of other children in dozens of other cases. I didn't even know this child and I couldn't bear to think about her suffering. Life isn't always kind to the most fragile among us. It's the hardest injustice to contemplate.”

Why, Why, Why are there not more novels like this one in the mystery/ thriller genre today? This was one of the best I have come across in a good long while. Keye is so different, so profound, and so human, someone who can admit to having problems but works so hard to stay on the right path. Her tenacious handling of this super emotional story was superb. Her mind wandered at times, but she always shifted her focus back to where it belonged-- finding a missing girl who was being tortured and held captive and try to stop her from becoming the third victim. Tense, terrifying, a parent's worse nightmare, secrets, cover ups, creepy pedophiles, and incredible plot twist had me riveted . Do not read this one late at night, all alone in the house. It is really creepy, and a word of warning- there are graphic depictions that some readers might find disturbing. This is a gritty story dealing with sexual predators, so you get the idea. I'm not sure where Keye will go from here. She has diagnosed herself, admitting what is really going on in her personal relationships, but what will she do about it? I think she will have a lot to think about but it is also made clear she is about to have a family situation come up which will certainly prove interesting. I can not wait for the next book in this series. Note that while this is a series, this book can be read as a stand alone. 5 stars!! 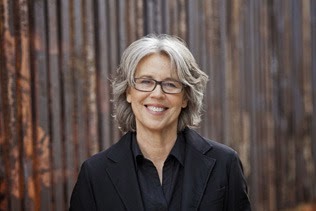 Amanda Kyle Williams worked as a freelance writer for the Atlanta Journal-Constitution, worked with a PI firm in Atlanta on surveillance operations, became a court appointed process server and owned a dog walking and pet sitting business in Atlanta.

Author of 'THE STRANGER YOU SEEK', 'STRANGER IN THE ROOM' and 'DON'T TALK TO STRANGERS', featuring former FBI criminal investigative analyst Keye Street.
Posted by gpangel at 12:30 AM