WAIT FOR ME BY MARY KAY MCCOMAS- BOOK REVIEW 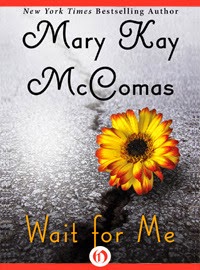 Wait for Me by Mary Kay McComas
My rating: 4 of 5 stars

Wait for Me by Mary Kay McComas is a 2012 Open Road Integrated Media publication. I was provided a copy of this book by the publisher and Netgalley in exchange for an honest review.

This is a novel originally published by Loveswept back in 1994. Open Road Integrated Media has re-issued the book in digital format. So, keep in mind when you are reading the book the time period in which it is written.

I enjoyed this one. It was really kind of a quirky romance. Holly is a friendly women if just a tad eccentric and Oliver is knocked out of his element when he meets and begins to fall in love with her.
A chance meeting on a plane headed to San Francisco, then an earthquake ,has put Oliver in the position of being Holly's hero. Oliver will discover that Holly is a bit of a do gooder type, which is putting it mildly. Oliver's family comes from wealth which puts them different classes. Oliver has a really hard time understanding Holly's drive to help the homeless, and why she would put herself in danger by going down on the streets to hand out condoms and clean needles. All he can think about is her safety. But, Holly holds a deep disdain for the wealthy who may do a great many charitable deeds, but do not ever roll up their sleeves and get their hands dirty. So, could these two manage to come to a understanding and make a relationship work?


There is a little touch of paranormal in the story which gives us the idea that Holly and Oliver were destined to be together. Holly leans toward an explanation of reincarnation, but Oliver is to practical for that, but a situation arises which could have him convinced of such a theory.
Holly's character goes beyond just an expression of individuality. She really does what she does because she is a good person and because her life has been good because of the family that took her in and because she has also had much sadness and hard blows. She knows all about orphaned children, drug addiction, and mental illness. She is not greedy and money really just does not appeal to her. She had found contentment with what she has materialistically. Oliver has never had a social conscience that way and Holly has him looking at his wealth and his family in a whole new light.

This book is a fairly typical Loveswept type contemporary novel that fits right into the mid-nineties time frame. I have said this countless times about contemporary romances not standing the test of time all that well. But, this one is not plagued with a lot of dated attitudes about women, or over the top aggressive alpha males or references to out dated ideals. No, there are no cell phones or computers involved but there was a funny referral to “Roseanne” the sitcom. So, you get the idea. I have no idea how to explain this one, just that it's a short , sweet, offbeat kind of love story with slight paranormal element involved leading us to ponder the role fate and destiny plays in our lives. Holly may have been on to something with her reincarnation theory , but one can interpret that anyway they wish. She and Oliver lived through a traumatic event and each had a residual effect from it, so you could just chalk it all up to coincidence. Either way, we know the couple will have a happy ever after. 3.5 rounded to 4. 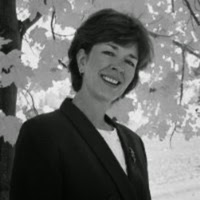 Mary Kay McComas is an acclaimed romance novelist and the author of twenty-one short contemporary romances, five novellas, and two novels. McComas has received numerous honors and prizes for her work, including the Washington Romance Writers’ Outstanding Achievement Award and two Career Achievement Awards from Romantic Times (one for Best New Novel and another for Most Innovative Romance Series). She has recently contributed to Nora Roberts’s J. D. Robb fantasy anthologies, with highly praised paranormal romance stories. McComas and her family live in Virginia’s Shenandoah Valley.