THE FROST OF SPRINGTIME BY RACHEL L. DEMETER- REVIEW + GIVEAWAY 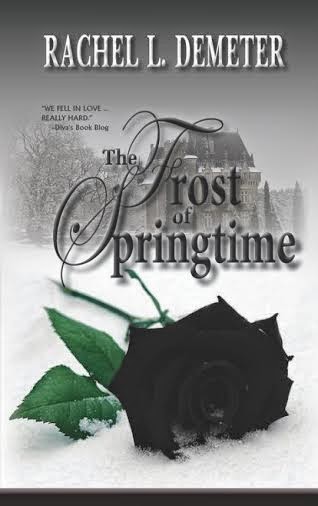 The Frost of Springtime

To rescue her was to rescue his own soul.

On a cold Parisian night, Vicomte Aleksender de Lefèvre forges an everlasting bond with a broken girl during her darkest hour, rescuing her from a life of abuse and misery. Tormented by his own demons, he finds his first bit of solace in sheltering little Sofia Rose.

But when Aleksender is drawn away by the Franco-Prussian war, the seasons pass. And in that long year, Sofia matures into a stunning young woman—a dancer with an understanding of devotion and redemption far surpassing her age.

Alongside his closest friend, Aleksender returns home to find that “home” is gone—replaced by revolution, bloodshed, betrayal—and a love always out of reach. Scarred inside and out, he’s thrust into a world of sensuality and violence—a world in which all his hours have now grown dark, and where only Sofia might bring an end to the winter in his heart.

Inspired by the 1871 Paris Commune, The Frost of Springtime is a poignant tale of revolution, redemption, and the healing power of love.

Buy the book at: 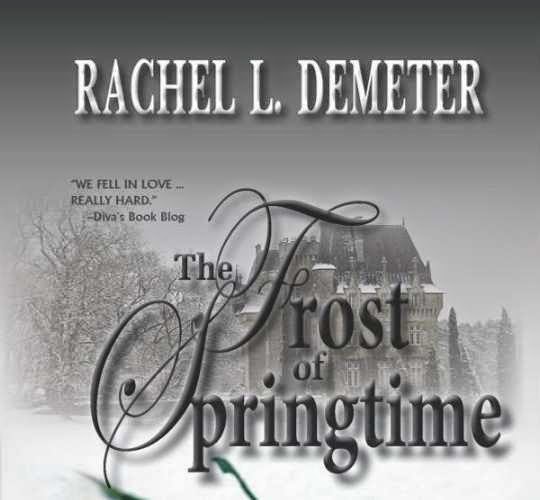 Aleksender’s lips crashed against Sofia’s in a movement he was utterly unable to control. Both hands broke through the material of her cloak in a jarring whoosh of air, grazing her shoulders with his icy fingertips.

Riding up and over the curve of her hips, speaking into the dewy heat of her mouth, “I do not love you.” Rough, weathered hands skimmed over the tender swell of her breasts and worshiped every inch of her beauty. His tongue dueled with her own, drinking Sofia deep, sucking in her spirit. Her kisses were sweet as nectar, dripping with pure seduction and a virginal sensuality. “I do not love you.” Aleksender’s quivering fingertips tangled within the mass of damp, russet locks. He gave a gentle tug and reeled her closer. “I do not love you.”

His hands swept down the elegant column of her throat and enveloped the thin shaft. Aleksender tenderly cupped her face within his palms. His thumbs stroked her cheeks and drew invisible circles along the slates of porcelain flesh.

Sofia knew he was a broken soul … more so now than ever before. No, she was not scared. His cruelty was entirely wasted. One look in his eyes had confirmed her every thought. He’d never harm her. Although, for reasons she couldn’t fully comprehend, he wanted her to believe otherwise.

But Sofia saw past his rugged façade. And her heart only constricted for his pain. She felt so helpless, so very trapped. How she ached to heal him! She ached to kiss away all of his scars—internal and external, old and new. She ached to rescue him from the blackened depths of despair—just as he’d done, all those nine years ago.

No. She could not stop herself. Sofia sighed and slanted her lovely face, deepening their kiss to new limits.

Yes, Sofia’s heart screamed, she could heal him. He needed only to open his arms, mind, body—

Aleksender forced himself away. Sofia’s eardrums thundered, slamming against her consciousness in a deafening roar. She could hear her own pulse. Her heart swelled to painful proportions, threatening to burst free.

Aleksender and Sofia harmoniously panted as they struggled to catch their breaths. Eyes blinking shut in despair, Aleksender pressed his temple against Sofia’s. Nestled within the safety of her arms and speaking for the both of them, he recited the tragic confession: “I cannot love you. 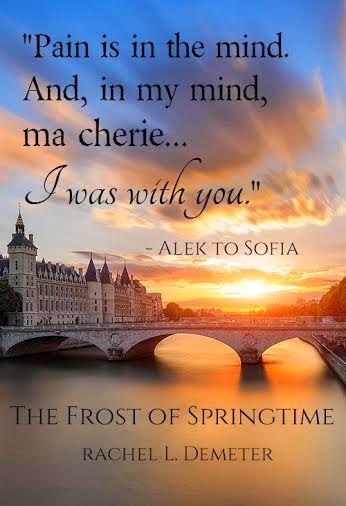 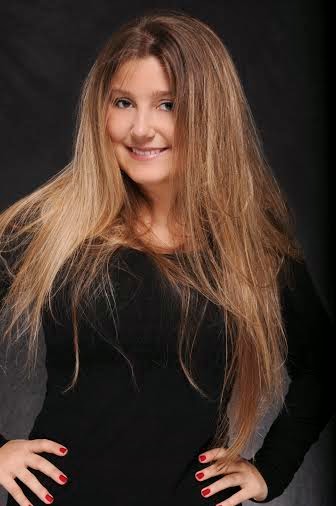 Rachel L. Demeter lives in the beautiful hills of Anaheim, California with Teddy, her goofy lowland sheepdog, and high school sweetheart of ten years. She enjoys writing dark, edgy romances that challenge the reader’s emotions and examine the redeeming power of love.

Imagining stories and characters has been Rachel’s passion for longer than she can remember. Before learning how to read or write, she would dictate stories while her mom would jot them down for her. She has a special affinity for the tortured hero and unconventional romances. Whether sculpting the protagonist or antagonist, she always ensures that every character is given a soul.

Rachel strives to intricately blend elements of romance, suspense, and horror. Some common themes her stories never stray too far from: forbidden romance, soul mates, the power of love to redeem, mend all wounds, and triumph over darkness. Her dream is to move readers and leave an emotional impact through her words.

The Frost of Springtime by Rachel L. Demeter
My rating: 5 of 5 stars

The Frost in Springtime by Rachel L. Demeter is a 2014 Black Lion Publication. I was provided a copy of this book in exchange for an honest review.


And a delicate flush of pink came into the leaves of the rose,
like the flush in the face of the bridegroom when he kisses the lips of the bride.
But the thorn had not yet reached her heart, so the rose's heart remained white,
for only a Nightingale's heart's-blood can crimson the heart of a rose. - From the Nightingale and
the Rose
by Oscar Wilde


When I first signed up to do the book tour for this book, I had simply presumed this was a historical romance set in France. Well, let me tell you, this is not your ordinary historical romance. Not by a long shot.

Immediately, I was struck by the writer's prose. I knew by the time I had read the first chapter this was going to be one of the best books I had read in 2014, no matter which genre. In our climate today we toss out five star reviews without giving a thought to the impact of the review structure. When a book like this comes along, giving it five stars just doesn't seem to do it justice. This novel is exemplary . Dare I hope that this is the beginning of a new era in historical romance?

Aleksender has entered a brothel only to encounter a disturbance when a woman brings in her abused young daughter attempting to sell her into prostitution. A man not normally moved by too many things in life, feels a deep compassion for this child and takes her in as his ward.

The beautiful Sophia will become the light of his life. Born into aristocracy, Alek has done all that is required of him, including marriage by arrangement to Elizabeth, a woman he respects and cares for but hasn't any feelings of love towards her. Aleksender went away to war and did his duty and has returned to a France he doesn't even recognize. While the affects of war have torn him up and left him
having dreams so vivid he is terrified of losing his very soul, the France he knew no longer exist, his best friend and fellow soldier is bitter and angry with him and his heart cries out for peace but can only find it in the arms of his beloved Sophia who is now a grown women. He struggles to maintain the guardian/ ward relationship, but utterly fails. Their love is a forbidden one, but it will not be denied. Aleksender is being eaten alive with love for this woman, but knows he can not have her. If the war didn't kill him this situation just might.

There appears to be no winners here. Aleksender's brother, Richard pines for Elizabeth, who pines for her husband, who pines for Sophia. But, the moral codes of the day will keep each of them from knowing true love and passion. Elizabeth is not a cold woman, just a woman raised for her duties as the wife of the Comte de Paris.

The Commune in Paris during 1871 is the basis for this story. France is on the brink of civil war, children are dying in the streets while the aristocracy appear to take little notice. This outrages Aleksender's friend, Christophe so much he lashes out at Alek. Alek's response to Chrostophe's rantings only adds fuel to fire.
Meanwhile, horrible memories surface that will go a long way in explaining Aleksender's empathy for Sophia. While Sophia lives in two worlds, one in the strict convent school she was raised in and the other on stage as a premier ballerina, she knows deep down she is meant to be with Alek despite the odds against them. She also knows she is the only one that can provided a healing touch to his wounded and scarred soul.

“For the first time he inhaled her unique scent.
Roses and the frost of wintertime.”

So, with all of the characters trapped in his or her own torment, the escalating tensions in the streets provide an almost unbearable sense of doom.

“Life is pain. Love is a pretty lie. Do not love the world or anything in it. The world and it's desires pass away.”

Heartache, sacrifice, ideals, duty, anger, and frustrations will all collide to bring out about an unexpected climax. Will Aleksender and Sophia pay the ultimate price for their love?

Not since the epic and sweeping love stories written in the 70's faded from view has a book so captured that spirit. Very well drawn characters, none of which we really dislike, even the hard bitten Christophe who is simply bereft by what he is seeing, all of which we feel some sort of respect for. You will hope beyond hope that there will somehow be a way for Sophia and Aleksender, but you wish it wouldn't come with too high of a price. This story has depth and will simply carry you away into the past, to another time where things are bleak, yet there is after all some hope.

As always, when reading a historical novel like this one, having a bit of knowledge about the era of time will enhance the enjoyment of the book. I personally only know the very basics of the French Revolution and was compelled to do a little internet research while reading this book. So, although this is a work of fiction, the atmosphere is quite authentic, plus I learned something I didn't know in the process.

I would love to write lush and lyrical praises for this book that would do it justice, but the best thing I could do is give you- the reader- a sage piece of advice- BUY THIS BOOK!
5.5 stars