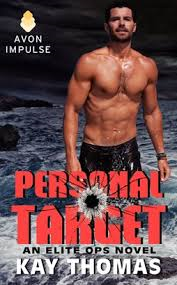 Personal Target by Kay Thomas
My rating: 5 of 5 stars

Personal Target by Kay Thomas is a 2014 Avon Impulse publication. I was provided a copy of this book by the publisher and Edelweiss in exchange for an honest review. This is an Elite Ops novel.

AEGIS: an elite team of ex-military men working under the radar of most governments. If you have a problem no one else can handle, they can help.

Nick Donovan has made some people very angry. When a crime boss in Mexico loses some family members he thinks Nick and his unit were responsible and he decides to make it personal. He has a woman kidnapped, believing she is Nick's sister- in – law, Angela. But, Angela is not home, she's on a vacation with her husband. So, who is the kidnapped woman?

Jennifer Grayson is staying at her friend Angela's home while she is on vacation. She never dreamed that in an instant her life would change. She is drugged and taken to a brothel in Mexico where is she about to be forced into prostitution. A text message sent to Nick showing Jennifer tied up has Nick scrambling to save the woman he once had a close bond with. But will he make there in time?

Nick and Jennifer once shared a summer together and although the timing was not right for them back then, Nick never really got over Jennifer. Rescuing her from the bordello has reawakened his yearning for her in a big way. It turns out Jennifer is not immune to those feelings either, but at the moment she is not in a good place. She survived the kidnapping, but all she witnessed has left it's mark on her.

Nick quit the CIA but is still being sucked in to situations he didn't want to be in. He is struggling with the lack of feeling he has, a feeling of being numb after all he had to do to perform his duties. He fears he is losing his humanity, but when finds out Jennifer is is deep trouble he is surprised and relieved to learn he hasn't lost his ability to feel after all. Suddenly he is a bundle of mixed feelings. Fear , anger, hurt, lust, and love all have Nick walking a tightrope.

However, the fun just never stops for Nick and Jennifer. No matter where she goes or what she does, Jennifer keeps getting shot at or is the victim of a kidnapping plot, and Nick always seems to be hot on her trail.
This couple will finally address their past with one another and it will not be easy for either of them as shocking revelations come to light. Answers as to what actually transpired that summer ten years ago between Nick and Jennifer will leave them both shell shocked. But, they won't have much time to dwell on the fall out of all that because someone has a personal vendetta against Nick and he knows getting to Jennifer is the best way to make Nick suffer.

You know, I can just imagine how hardened someone might become if they were in the CIA, Black Ops or anything else similar to these organizations. One can only guess at what acts these people must perform, what human depravity they must witness. So, Nick is at that burn out phase that has him thinking over the way he wants his future to turn out. Nick was protective with strong alpha male qualities but he was also very sensitive. I was vastly relieved to see he has a new life ahead of him now with some troubling issues from the past finally put to rest.

For Jennifer her life was sailing along as she had hoped it would all except for her cheating husband, a man she as recently divorced. The last person she expected to encounter was Nick. While she was certainly happy to see him, a time would come when she would have to explain some very painful things to him, things that she knows he will not handle well. But, if they stand a chance at happiness the truth must be told.
This book shot out of the gate and had me holding on for dear life from start to finish. The actions never slows down and the author does a wonderful job of balancing the action with the plot line, the romance and relationship issues between Jennifer and Nick. I also liked the author's choice of calling attention to the ever increasing problem of human trafficking and the sex trade especially around border towns. I also enjoyed the familiar setting since I don't live too far from the Dallas area. I recognized many of the landmarks the author spoke of which is always fun. Overall a job well done. A thrill ride, mystery, suspense, romance and an awesome HEA. 4.5 rounded to 5 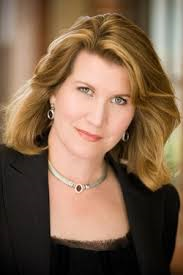 I didn’t grow up burning to be a writer. As a child I wasn’t even much of a reader until fourth grade. That’s when I was stuck at home with the flu and my big sister read THE BLACK STALLION aloud to me. For hours I was enthralled—shipwrecked in a foreign land and riding an untamed horse across the hot desert sand. Then tragedy struck. My sister lost her voice. (I think she caught my flu.) But I couldn’t wait to hear what happened to Alec Ramsey—so I picked up that book, finished reading it by myself, and went in search of more adventures at the local library. Today I live in Dallas with my husband, our two children, and a shockingly-spoiled Boston terrier.

In November 2013, HARD TARGET: Elite Ops-Book 1 was released in my new series from Avon Impulse, featuring sexy ex-military men...and the women who rescue their hearts. HARD TARGET received an Award of Merit in the HOLT Medallion Contest and is also a nominee for best romantic suspense in the GDRWA Booksellers Best Awards. Look for PERSONAL TARGET: Elite Ops 2 in July 2014. It's available for pre-order now through all e-book retailers. For excerpts, book trailers, and more—visit my website at www.KayThomas.net

I can also be found online at Facebook. www.facebook.com/KayThomasWrites

In addition to their US releases, my national best-selling books have been published in France, the Netherlands, Estonia, Australia, the UK and South Africa. BULLETPROOF HEARTS (April 2011), won the 2012 HOLT Medallion in Short Contemporary and was a finalist in the National Readers' Choice Awards. My debut novel, BETTER THAN BULLETPROOF (January 2009) was a HOLT Medallion Award of Merit recipient, a Readers’ Crown finalist, and a Romantic Times Reviewer’s Choice nominee.