THE GUNSLINGER BY LORRAINE HEATH- A BOOK REVIEW 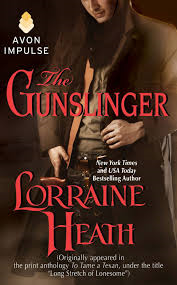 The Gunslinger by Lorraine Heath
My rating: 5 of 5 stars

The Gunslinger by Lorraine Heath is a 2014 Avon Impulse publication. I was provided a copy of this book by the publisher and Edelweiss in exchange for an honest review.

As Lillian struggles against her attackers, her brother runs for help. Chance Wilder, a man with a reputation as a hard stone cold killer and the fastest gun around is offered “everything” by Lillian's brother if he will help her.
Chance winds up with a bullet for his trouble and is taken to Lillian's home to recover. Lillian certainly does not approve of Chance's life as a hired gun and always makes it a point to let him know it. But, upon closer inspection it appears that Chance will avoid violence if at all possible. He would much rather negotiate a compromise than have to pull his gun.
In the meantime Chance gets an ear full of gossip about Lillian which suggest she is a fallen woman. The land and home she owns was given to her as a gift from a much older man and now that he has passed on, his family is trying to get rid of Lillian. With the situation becoming more and more heated, Chance finds a reason to stick around , even after his wound has healed. He begins to realize that he gave up so many wonderful things like a wife and a family because of his lifestyle and reputation. He knows he could never have those things, not with Lillian or anyone else. But, as the truth seeps out little by little, it becomes harder and harder for Chance to leave.

This short story/novella has an obvious western setting and examines the common human trait of judging people before we have all the facts. As you will find out, Lillian and Chance both have reputations they don't deserve. The longer Chance stays with Lillian the more her comes to care for her and vise versa. But, Chance thinks Lillian deserves better than a hired gun and knows that once Lillian is safe again he will have to leave. But, just like in the old west the tension builds until there is an old fashioned showdown. Will Chance walk away unscathed? If he defeats the men who are after Lillian will Chance go his own way or will he decide to hang up his guns and settle down?
I really enjoyed this story and loved the thought provoking premise which goes to show you should never judge someone until you are sure you know the entire story. Things would have been so much better if everyone had behaved like adults and talked things out, instead conclusions were drawn, lies were told, lives were lost, and in the end the truth made it all seem so sad. The time wasted on hate and revenge could have been spent in establishing solid relationships. This is so often the case in the past and in the present. No matter what, it seems people continue to make this same mistake over and over again.
Of course sometimes good things can come from bad situations and that is the case with Lillian and Chance. We know they will be happy in the new life they forged together as they leave the past behind them.

This one gets five stars!

Also writes Young Adult under Rachel Hawthorne, Jade Parker, and with her son as J.A. London)

Lorraine Heath has always had a soft spot for emotional love stories. No doubt because growing up, watching movies with her mom, she was taught that the best movies "won't half make you cry."

She is the daughter of a British beauty (her mom won second place in a beauty contest sponsored by Max Factor® during which she received a kiss from Caesar Romero--Joker on the original Batman TV series) and a Texan who was stationed at Bovingdon while serving in the air force. Lorraine was born in Watford, Hertfordshire, England, but soon after moved to Texas. Her "dual" nationality has given her a love for all things British and Texan, and she enjoys weaving both heritages through her stories.

When she received her BA degree in psychology from the University of Texas, she had no idea she had gained a foundation that would help her to create believable characters—characters that are often described as “real people.” Her novels have appeared on bestseller lists, including USA Today, Waldenbooks, and most recently, the New York Times.
Posted by gpangel at 12:30 AM