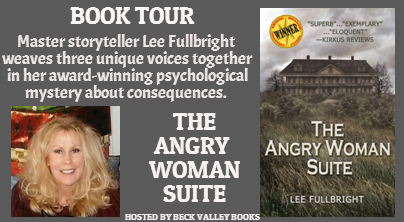 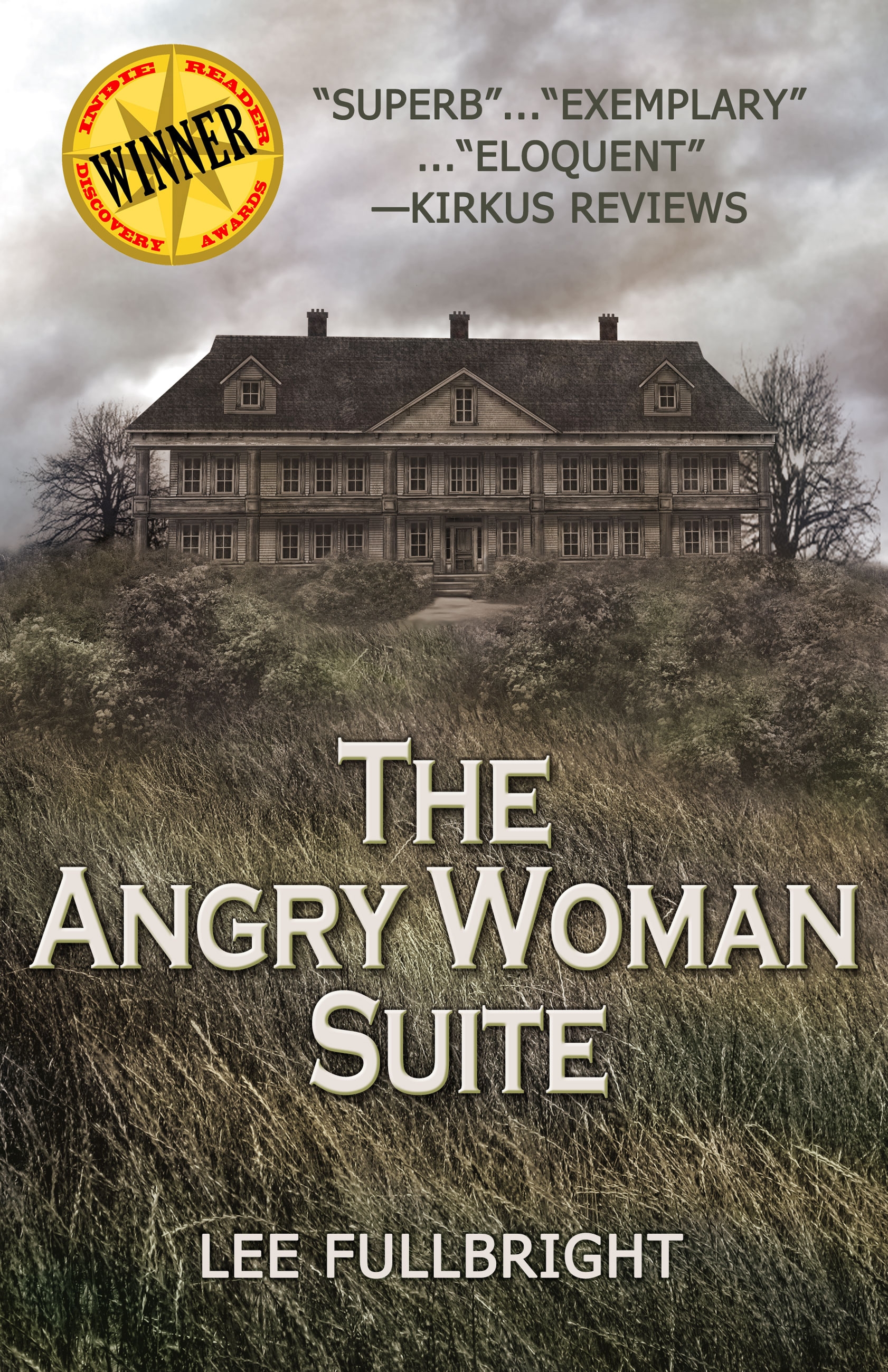 Master storyteller Lee Fullbright weaves three unique voices together in her award-winning psychological mystery about consequences. The Angry Woman Suite is a rare and bold novel; a heartbreaking, hopeful marvel.

"They need to be exercised, hearts do ... to keep them strong."

Every family has skeletons, but the Grayson family has more than its share of secrets--and of portraits. Mystery portraits that incite and obscure. Portraits to die for.

An unsolved celebrity double murder in Pennsylvania. A girl looking for autonomy. A young man in search of an identity. An older man's quest for justice.

A plot that pulls and twists. 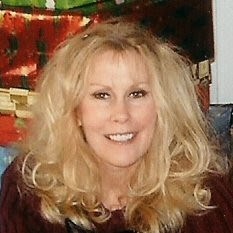 Lee Fullbright lives in San Diego, CA, on beautiful Point Loma, with her Australian cattle dog, Baby Rae (owner of her heart). Her historical psychological-suspense novel, The Angry Woman Suite, a Kirkus Critics’ Pick, won a Discovery Award, a Royal Dragonfly H.M., and the San Diego Book Award for Best Mystery, as well as the SD Geisel Award for "best of the best."


NOW FOR THE AUTHOR'S GIVEAWAY 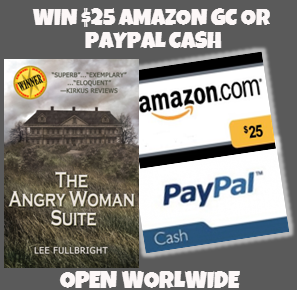 The Angry Woman Suite by Lee Fullbright
My rating: 5 of 5 stars

The Angry Woman Suite by Lee Fullbright is an independent 2012 publication. I was provided a copy of this book in exchange for an honest review.
As I have only completed this book about ten minutes ago the effects are super fresh in my mind. I am just rocked by this novel. This stunning novel has left me with no words at the moment. I will think about this book all night and tomorrow and for a long time to come.
Set in the 1900's all the way through to the 1960's the narrative switches back and forth between Francis, Aidan, and Elyse.
A set of portraits of the beautiful Magdalene, one of the eccentric Grayson sisters will set off a chain of events that will follow them through decades of secrets, lies, extortion, murder, manipulations, and cruelty. Twisted, evil, diabolical minds and deeds, greed, lust, jealously, anger, frustration, sickness in the mind, sickness in the body, and the attempt to right wrongs or set things right based on guilty or a misplaced sense of duty all factor into the story. There are intense scenes of abuse both physical and mental. Your heart will ache for two innocent children who have the misfortune of bearing the brunt of all these machinations that have gone on for decades.
The first voice you will hear is that of Elyse. The year is 1955 and the location is Sacramento. Elyse and her younger sister, Beatrice, who is only ever called “Bean” are the daughters of Diana whose first husband died young. Now remarried to Francis, the two girls lives will become a living nightmare. The only bright spot in Elyse's life is her grandfather who she will have to be separated from when her mother remarries. It will fall upon Elyse's shoulders to shield her sister from as much abuse as possible.

From here we are given the viewpoint of Francis and he tells a very different story from that of Elyse.

Then we hear from Aidan who tells his story going all the way back to 1900- 1916 in East Chester County in the community of Chadds Ford. Aiden is a school teacher just starting out with big ideals. Aiden was a bit of a mamma's boy for a long time and when his mother passed he still didn't have a lot of social skills.
It never occurred to him at the time he was teaching the Grayson girls, Madalene and Lothian , and Elizabeth that one day he would become so embroiled in their lives as well as being involved in the life of one of his favorite students, Jamie Waterson. Through Jamie, Aiden seems to develop a “man crush” on Matthew Waterson, Jamie's father and a famous artist. For some time he never sees or is introduced to Matthew's wife, but eventually she shows up in Chadds Ford as well and this is where things get complicated.

After we have been set up a little with all the main players, we are taken on a trip through the past from thirties, to the forties, to the sixties as we watch Magdeline become the model for a set of portraits by Matthew titled “The Angry Woman Suite”. These portraits will become a sensation and make a lot of money for the Grayson family, who by this time are in dire need of funds. They will also set off a string of heartbreaks and tragedies.

Each character is this book as been given an in depth voice and once I started reading these first person narratives I couldn't put this book down. This book is a fascinating study of small town eccentricities, unrequited love and the consequences people paid for their myraid of sins.
Who do you believe? Which person is telling the real truth? The reader will ulitmately have to decide that but I think most will know the real truth even if there are alternate theories offered up.
Even though these people have lived through a lot of grief and many trials we are still left the feeling that the strongest will survive and that good will triumph in the end.

I loved the idea of having more than one character give a first person narrative. I've said this before, but it's like having your cake and eating it too. All the benefits of first person story telling and the benefit of third person narrative too. We get to know the innermost thoughts of these characters and their personal perspective on events and how they view the secondary characters. Francis hated the family of women he was saddled with and viewed them from a different perspective than Aidan. Aidan perhaps saw everything from the angle of “the big picture”, but his motives were not always pure and he didn't have the ability to see into the future because if he had he most certainly would never had taken the actions he did. Each person that reads this book will of course have his or her own opinion on these characters, but I think Aidan did try to do the right thing by everyone. Aidan was flawed in his love for some people, like Jamie and Francis. Despite their flaws he still loved them and at times it made me angry because he didn't step in and rescue Elyse when it was clear she was being practically tortured and poor Bean was flat out ingnored by a self absorbed mother and wicked, twisted, step-father. Not that it was Aidan's responsibility per se, but it appeared no one else was going to do it and Aidan was perhaps the most aware the situation.

This story was an amazing character study, a novel that I will want to read again someday. I love a novel that has so many complex angles. As a lover of the old Gothic type novels – especially Southern Gothic, I thought at times this book had that tone. The setting was maninly in Pennsylvania and the New England coast, California and Biloxi were also places the family traveled, so Southern Gothic couldn't apply really, but the tone was certainly there. There were certainly a few bats in the belfry as they say and a plethora of family secrets that will keep you wondering if one person could be held responsible for the way things worked out or if it was a chain of events and actions by several people that brought things to such a tragic point.
This author certainly has a bright future if she can pull something like this off with a first novel. I recommend this book to book lovers- period. No matter what genre you tend to lean toward you really should treat yourself to this book .