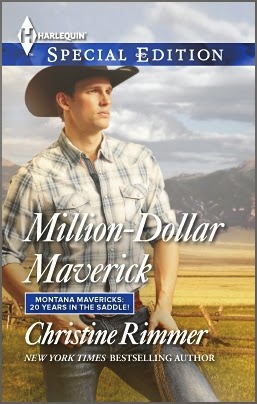 Million-Dollar Maverick by Christine Rimmer
My rating: 4 of 5 stars

Million Dollar Maverick ( Montana Mavericks #) by Christine Rimmer is a 2014 Harlequin Special Edition publication. I was provided a copy of this book in exchange for an honest review.

Nate is in a somber, reflective mood when he sees a motorist standing in the rain apparently having run out of gas. The moral code instilled in him simply couldn't leave a woman alone in that situation. That fateful day would change his life forever.
Callie is determined to start her life over in Montana. She is a nurse, has spunk, really cares for people and despite the nasty comments Nate throws at her about not being capable of lasting through one single Montana winter, she fits right into Rust Creek Falls. That's more than Nate can say at the moment since he has solidified his reputation as a love 'em and leave 'em cowboy, but also a man that shamed himself by playing really dirty pool in the last mayoral race. When Callie calls on Nate a year after he rescued her by the side of the road, to sort of let him know she was tougher than he thought, the two find themselves feeling a little awkward with one another. There is definitely an attraction between them, but Nate is more than a little reluctant to pursue it. Why? Well, unbeknownst to most people in Rust Creek Falls Nate has suffered an unimaginable loss. A loss so profound he may never be able to move past it. But, he is trying to make up for his past transgressions and the big secret he is keeping from everyone is helping him accomplish that.

Dark brooding cowboys are a guilty pleasure for me and Nate fit that role perfectly. Callie comes along and blindsides him. As for Callie she really is perfect for Nate. Smart, dedicated, outgoing, and full of life and is usually really upbeat and optimistic. She knows Nate better than most and believes in him. But, Nate's fears, which are legitimate, and to me understandable, could prevent him from having all the things he thought he had lost.
Nate and Callie make a good match even if Nate is still dealing with all the issues in his life. This is a realistic look at the realities of living with such an incredible heartbreak and being haunted by it daily. Nate wanted to change, wanted to be happy, wanted to be with Callie but he is going to have to dig deep and work very hard to overcome his issues. Callie is the perfect person the help him through that. The money part of the story was not as prominent as you might think. I did like the maturity Nate showed in dealing with his windfall. Instead of living the party life, Nate stayed in his home town and started paying it forward.
So, this is a really sweet small town love story that will touch your heart and leave you will feeling of satisfaction knowing that everything is looking up for Nate and Callie as well as all of Rust Creek Falls.