THE RAVENHOE CAULDRON BY REBECCA YOUNT- A BOOK REVIEW 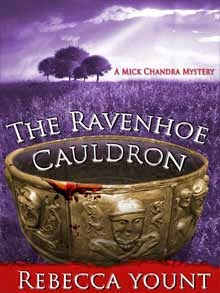 The Ravenhoe Cauldron by Rebecca Yount
My rating: 4 of 5 stars

The Ravenhoe Cauldron – A Mick Chandra Mystery by Rebecca Yount is a 2013 Independently published novel. I was provided a copy of this book in exchange for an honest review.

Mick is supposed to be on parental leave when he gets called back in to work the case of an infamous antiquities thief and forger. This leads Mick and his team on a wild chase and puts him in contact with various museums and collectors as well as others who had dealings with the dead man. As the story winds it's way through the murky life of Stanislaw Janus, we find that he has quite a few competitors and enemies and lovers all with an eye on the famous Ravenhoe Cauldron.

On a personal note Jess is ready to try out New York again after the tragedy of losing her first child and all nightmare of all that happened there. Elizabeth has a new look and maybe a new boyfriend.

This case has Mick in an exceeding amount of danger as the body count begins to rise. The diverse and shady characters all seem so willing to help, but could one of them be killing off anyone with knowledge of the Ravenhoe Cauldron? Schemes and red herrings abound as Mick suffers through seduction attempts to being shot at. As the investigation deepens, Mick begins to think the Janus is still alive and an imposter was killed in order for Janus to fake his own death. True? False? Only time will tell.

I confess that this is my first Mick Chandra mystery. It is a British mystery and will put you in mind of say, Elizabeth George of Debra Crombie.

This is a very interesting mystery and I was engaged through out. All the characters were fleshed out and the mystery was light without graphic violence or a great deal of foul language. There are some sexual references but nothing explicit.
My one complaint is that the author became repetitive at times and seemed to want to hammer home to the reader that Mick was no longer a ladies man. He's found his one true love in Jess and is happy as a man could ever hope to be with his wife and baby daughter and his pets. This statement is made on numerous occasions. It's almost like Mick is trying to convince himself he doesn't miss his days as a single man. It was like “He doth protest too much”. I don't think that was the message the author was trying to convey, it just got a little heavy handed and perhaps a little editing would have helped out here and there.
Overall, this was a wonderful effort and I do recommend this book to all mystery lovers but especially to those that enjoy a good British Mystery.
This one gets 4 stars 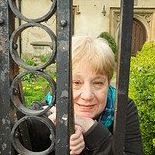 Who is Rebecca Yount?  I frequently ask myself that question.
This much I know for certain: I hail from a literary family.  My mother’s cousin, Julia Peterkin, was author of the Pulitzer Prize-winning novel, Scarlet Sister Mary.  Another cousin, Nella Braddy, edited most of Helen Keller’s books.  Nella also wrote the first definitive biography of Anne Sullivan Macy, Helen’s beloved teacher.
For many years, my father was an editor/journalist for UPI, as well as a writer for the Columbus Dispatch. One of his first assignments with the Dispatch was to review burlesque star Gypsy Rose Lee’s act at the Gaiety Theater. Mother was not amused.
With such a literary heritage, my parents would no more allow me to write sloppy prose than walk blindfolded into heavy traffic. So I suppose you could say that writing is in my blood.
Even though I studied music from the age of eight until twenty-one at the Capital University Conservatory of Music in Columbus with the intent of becoming a concert pianist, I never shook the writing bug. From an early age, I wrote stories, poetry, and even a novel about my beloved Springer Spaniel, Mac.  When I wasn’t actively writing, I was making up stories in my brain, which rarely shut down.
After graduate school, I worked for a research center as associate editor for The Political Handbook of the World, a compendium of the world’s political systems. Afterwards, I moved to Washington D.C., where I found myself working at a series of grant-funded projects that included everything from advising members of Congress on education policy to working with the Inuits and Athabasca Indians in Alaska and the Blackfoot tribe in Montana to improve communication between state education agencies and their far-flung tribal villages.   I wrote legislative language for Title V (Reauthorization of the Higher Education Act), and through a series of private grants, worked to reduce the dropout rate of children at risk of failure in schools.
Along the way there was a bad marriage, divorce, then a good marriage,  plus three loving stepdaughters.   And what became of my music and writing?  Sadly, they both fell by the wayside while my husband, David, and I concentrated on our Washington careers and raised our three children.
Then came early retirement: me first, followed closely by David. Unlike many retirees who haven’t a clue what to do with all that free time, we both knew we would return to the thing we both loved the most: writing. And so we write, in separate home offices in our little Hobbit house just outside of Washington, D.C.  While I hammer away at my crime novels, David continues to write and publish his books on religious faith and practice.
Finally came that fateful day in Essex, England, when I sat under a solitary tree in a fallow field and developed the plot for A Death in C Minor.  After a highly diverse and scattered career, that late summer afternoon marked my true beginning.