SONG FOR THE DYING BY STUART MACBRIDE- A BOOK REVIEW 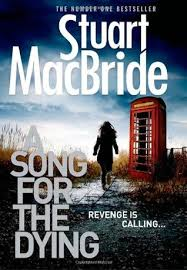 A Song for the Dying by Stuart MacBride
My rating: 4 of 5 stars

A Song for the Dying by Stuart MacBride is a 2014 HarperCollins publication. I was provided a copy of this book by the publisher and Edelweiss in exchange for an honest review.

The Inside Man is back. A mutilated body is found with a doll stitched inside, which was the signature of the killer that hadn't been heard from for eight years.
Ash Henderson is in prison for a crime he was set up for. When the Inside Man shows up again, he is released in order to help with the case, under strict rules of course. If he can bring down the notorious serial killer there is a chance he can gain his freedom. So, now he is working with Alice, the psychologist he worked with previously. All the previous victims that were survivors of T.I.M. as he is now dubbed ,must be interviewed again as well as the rather oddball father of a the latest victim. This dredges up all the old fears, and memories of the crimes committed eight years ago.
This case is as dark as they come. Ash needs a chance at revenge as well as a chance for redemption. The dynamic between Ash and Alice is unusual and I can't always tell what their relationship could be defined as, but they are close and do care about each other a great deal. Ash is still reeling from the demise of his family, from being framed for murder, and now being assigned to the most intense manhunt there ever was. If you have never read Stuart MacBride's novels you should be aware that he pulls no punches. Nothing is sugarcoated, nothing is watered down for public consumption. You will have to be able to read dark crime thrillers, digest graphic crime scene details and violence, uncomfortable subject matter, and yes, the author did manage to sneak a tiny amount of the black humor he is sort of famous for, but it's nothing like the Logan McRae series. Which brings me to the next point .. this is not Logan McRae. If you have read that series and then pick this one up, do not make comparisons. Both series are very dark, but polar opposites in every other respect.
This is a very well written, absorbing crime thriller as well as a psychological thriller. I can't speak highly enough of Stuart MacBride's style. I will confess to being a big fan of Logan McRae , but Ash Henderson is still a top notch read. I don't know if the author will continue to update us on Ash, but I certainly hope so.
Overall this one is an A.