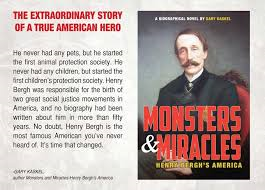 Monsters and Miracles by Gary Kaskel
My rating: 5 of 5 stars

Monsters & Miracles: Henry Bergh's America by Gary Kaskel a 2013 Infinity Publishing release. I was provided a copy of this book in exchange for an honest review.

Among the noblest of the land,
Though, he many count himself the least,
That man I honor and revere,
Who without favor and without fear,
In the great city dares to stand,
The friend of every friendless beast.

This biography is about Henry Bergh a man that had no pets or children but became their biggest champion. The man that founded the ASPCA and brought child abuse into the court system could not tolerate the cruelty distrubted to those who could not fend for themselves. After witnessing terrible and uncalled for beatings of animals and having been impressed with a program he heard of in Britain, Henry decided America need such an organization. Calling the public's attention to animal cruelty opened the eyes of many and soon Henry realized the cause was bigger than he was. While there were many supporters for his cause, there were public battles with some well known and popular people like B.T Barnum of the Ringling Bro. circus fame. Several times Henry became a laughing stock and was humiliated publicly. His fame as an animal advocate is what led him to become involved in a horrific child abuse case.
Henry's wife was very supportive of him although they had somewhat of an unorthodox marriage. I think they were a victim of the time period they lived in when there was such a double standard and women were often uneducated about sex before they married.
Henry's soft heart and stubborn refusal to allow such cruelty to continue also earned him respect by a great many people as the tribute by Henry Wadsworth Longfellow can attest to. It is a mystery to me that a man that accomplished so much and founded an organization that is bigger than ever could not be a household name. The truth is most people have no idea who Henry Bergh is. Therefore I would highly recommend this book to historians, animal lovers and social workers as well as suggesting this book for high school students ( some mild language and SC would make this particular book unsuited for younger children.) to learn about this important part of our history. Most of the book is about Henry's animal rights work because his involvement in child advocacy did not occur until much later.
On a personal note I would like to say that for me my pets are like family. I know they have the same hormones people do and to me that would indicate they are capable of having feelings. I know my pets show signs of envy, fear, pain, love, boredom, joy, and contentment. I know they can have their feelings hurt and can experience the same grieving process humans do. But, what sets them apart from humans is their loyalty . My pets love me no matter what. It's unconditional - my sins , my flaws, my social standing, my weight, my income- none of that matters to them .. but people ?... well you get the point. Some might suggest Henry went too far at times with his advocacy, but he was only trying to make a point. Even B.T Barnum recognized Henry's work despite their public disagreements.
The only problem I had with the book was that it was a little dry at times which history tends to be no matter how hard the author tries to liven it up. However, for the most part the book was very interesting and I am so happy Henry "meddled" back then and opened the minds and hearts of the public inciting them to take action against cruelty in all it's forms. An inspiring human being we could all learn from is Henry Bergh.
This one is 4.5 stars- rounded to five


MY INTERVIEW WITH GARY KASKEL

1) What inspired you to write this book about Henry Bergh?


I knew of Henry Bergh for many years and was always wondering why he was not a major American historical figure. Since there were few books written about him, and the last adult biography was more than fifty years ago, I made it my mission to tell the public his story in a contemporary telling.
2) Why do think Henry's legacy has remained so obscure?


Curiously, the ASPCA does little to promote Bergh's legacy, and the entire field of animal protection remains a controversial one even today.
3) In what ways can we help to keep Henry's legacy alive and bring the mistreatment of animals to an end?


Through your consumer choices. The most common misconception about animal cruelty is that individuals, mostly neglectful pet owners, are the main perpetrators of animal suffering. The truth is, the vast majority of animal cruelty is inflicted by corporations and large institutions. Insanely crowded factory farms, painful biomedical and pharmaceutical testing, puppy mills supplying pet stores, animals used in entertainment like rodeos and circuses, animals suffer immensely all in the name of making a buck. Only your consumer choices can eliminate the demand for products and services that exploit animals. And the easiest thing you can do is reduce or eliminate eating meat.
4) Henry also brought child abuse into the public consciousness and has had a far reaching impact on so many lives past and present. Do you think our laws and awareness of abuses would be different today if Henry hadn't "meddled" ?


The issues Bergh tackled would likely have taken root eventually in an evolving society, but Bergh was there first and successfully put these issue on the map in a fearless and dynamic way.
5) What are you working on now?


I'm working on an autobiographical novel about the year I turned thirty, entitled, "I Could Have Been a Pawnbroker." It was quite a year.
6) Where can readers contact you?

8) Tell us about your pets.


I have two miniature poodles, one rescued from the Manhattan Shelter and one from a Los Angeles rescuer, and a yellow tabby who had been abandoned in my New York office. Among them the english vocabulary they understand is likely over 100 words.
9) Is your documentary "Animal People" still available and where can readers find it?
You can buy the DVD at http://www.ua4a.org/animalpeople.html and it is also viewable online for free at http://vimeo.com/channels/192424.
10) Do you have a favorite quote you would like to share with us?

Since there is a disconnect in many people's minds between the pets we live and sleep with and the food animals raised for us to eat, I like "Peace begins on your plate."
GK 4-29-14