FALLING FOR JACK BY JOANNE HILL- A BOOK REVIEW 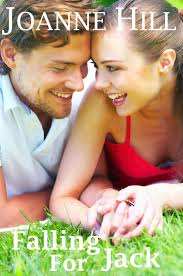 Falling for Jack by Joanne Hill
My rating: 3 of 5 stars

Falling for Jack by Joanne Hill
Jack's life is a mess. His supermodel girlfriend is having an affair with his best friend and he gets a phone call out of the blue from a former girlfriend explaining that for the past eight years she has been raisng his son without informing him he was a father. With the media hot on his trail and having a child involved, he asked an old high school aquaintance, Robyn, a single mother with twins if she would help care for his son, Eric , until he can find a permanent caregiver.
Robyn had an incredibly bright future. She was given a full scholorship and was in pre-med when she suddenly dropped out and never completed her education. Now she is divorced, trying to raise her twins without much help from their father and run a business. When she and Jack strike up a conversation it's really just a "Hey, don't I know you?" sort of thing. But, they talk awhile and when Jack needs help with Eric, Robyn seemed like the perfect person. Robyn agrees to help him but something tells her Jack is going to become a big problem for her.
This sweet romance chronicles the massive changes that Jack's life takes in a very short period of time. Robyn's decision to take the job Jack offered has her more involved in Jack's life than she intended. She helps him adjust to parenthood, tries to help him bridge the gap between himself and his family, helps the young pregnant woman abandoned by Jack's best friend, and deals with her own disappointments and her perceived failures.
This is the type of thing real people deal with on a daily basis. Parenthood is difficult, job pressures, relationships with family, and the our own goals, hopes and dreams round out life giving us good times and stressful times and bad times. I liked how the book felt so down to earth without a lot of immature angst. These were adult people that while they had their share of pity parties they also behaved like mature people just trying to cope with how things turned out for them.
There were some moments when the daily routines got a bit like, well, like a daily routine. I do wish we could have had a little more romance between Jack and Robyn. I can see why Robyn might have drawn the conclusion that Jack was just looking for a woman to help him out rather than someone he actually was in love with. So, a tiny bit of steam level would have been nice. I think the falling in love part for this couple sort of snuck up behind them and tapped them on the shoulder and said, " Wow! I love this person". This too was so natural and right but it was also too low key for romance readers.
The setting of New Zealand was nice for a change of pace, but one will have to adjust to the different way of wording things and certain phrases might not be familiar if you are from the US.
Overall this is was a pleasant enough read and I think this author shows potential. I have one or two more books by Joanne Hill in my TBR list and I'm looking forward to seeing how those turn out. This one gets 3 stars.