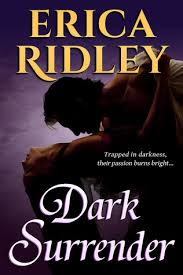 Dark Surrender by Erica Ridley
My rating: 4 of 5 stars

Dark Surrender by Erica Ridley is a 2014 Intrepid publication. I was provided a copy of this book by the publisher and Netgalley in exchange for an honest review.
When Violet Whitechapel, an orphan that thought she had finally found a place to land comes upon a child in danger she rushed to intervene and commits a terrible crime in the process. Now on the run from the authorities, Violet finds refuge in a crumbling Abbey as a governess to a nine year old child named Lillian. Lillian has "sun sickness" and must always remain in the dark. She is difficult to handle because she has never been properly socialized and does not understand her father's actions.
Alistair's sole purpose in life is to find a cure for his daughter's malady. He also lives in the dark and spends his time contacting scientist and doctors searching for a way to cure his daughter. Violet's appearance in his life changes so many things for him and his daughter. The attraction between Alistair and Violet grows daily and the progress Lilly makes is slow but promising as Violet helps father and daughter overcome some of the resentfulness and misunderstandings they have.
Violet will learn that she is being sought after by the law and they are much closer than she thought. She will also learn she is not the only one with a few dark secrets.
This historical romance that raises a toast to the Gothic genre, has a dark and moody tone mixing traditional Gothic with traditional historical romance and it turns out to be a good match, at least in this instance. Fiercely loyal staff, rumors of vampires, suspicions, a dark shadowy abbey and a man that has left his wife's room like a shrine but finds himself falling in love with Violet sets the stage for this unique story. Alistair doesn't know Violet's story of course and although she will eventually have to come clean about how she came to be at the Abbey, other areas of her young life remain obscure allowing Alastair to continue on with a fantasy about who Violet really is, all the while harboring some pretty dark secrets of his own. The old double standard comes into play as Alastair makes judgments about Violet that are hypocritical to say the least. This attitude will have far reaching and devastating consequences for Lily who has blossomed under Violet's care.
Being a huge fan of Gothic novels I couldn't resist this one when it was offered on Netgalley. I wasn't disappointed. My hats off to Erica Ridley for attempting such a difficult task. Mixing Gothic and more modern romance expectations would have to be a challenge. I thought she did a wonderful job of staying true to the Gothic genre while keeping the historical romance readers happy at the same time. Yes, this is a much more somber romance and atypical from what most of us think of when we think of Historical Romance. The younger readers may also be completely unfamiliar with true Gothic stories and hopefully this book will inspire some to discover this genre and maybe even help bring it back to popularity again. This one gets 4 stars.
( Besides the obvious Jane Eyre and Wuthering Heights Gothic literature that so many think of , try looking into the "horrid" novels Jane Austen mentions in Northanger Abbey and then check out Dorothy Eden, Barbara Michaels, Dorothy Daniels, and other Gothic Romance authors from the 1960's and 70's. Some of these do have supernatural elements, but most do not. It's more a an atmospheric tone than anything else. ) 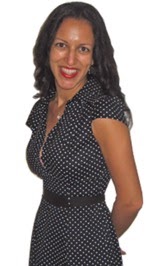 Erica Ridley learned to read when she was three, which was about the same time she decided to be a writer when she grew up.

She is the author of three Gothic romances, Too Wicked to Kiss, Too Sinful to Deny and Dark Surrender, the vampire romance "Never Been Bitten" in the paranormal romance anthology Born To Bite, contemporary paranormal romances Charmed and Midwinter Magic, and the holiday fantasy romance Let It Snow.

When not reading or writing romances, Erica can be found riding camels in Africa, zip-lining through rainforests in Costa Rica, or getting hopelessly lost in the middle of Budapest.