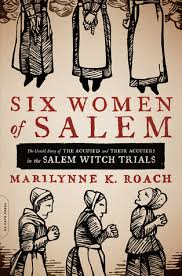 Six Women of Salem: The Untold Story of the Accused and Their Accusers in the Salem Witch Trials by Marilynne K. Roach
My rating: 4 of 5 stars

Six Women of Salem: The Untold Story of the Accused and Their Accusers in the Salem Witch Trials by Marilynne K. Roach is a 2013 De Capo Press publication. I was provided a copy of this book by the publisher and Netgalley in exchange for an honest review.

This book is a non- fiction account of six of the most commonly known people mentioned during the Salem Witch Trials. With the unique idea of spotlighting the accused and the accusers as well one that fell into both categories, the book details the personal lives of those involved and outlines the type of thinking and superstitions of the era. A short story written in italics begins each chapter and those short pieces are fictional. However, the trials are at the core of the book and most of focus in on this area of history.
The first part of the book is a little dry with a lot of dates and genealogy which could be very interesting for hardcore history enthusiast. For those who would rather just get to the juicy parts, you really could skip over part one and start on part two . From that point on the story flows much easier and is very interesting. I have always found this period of time fascinating and I keep my eyes peeled for books that are reputable and well researched that deal with this topic. It is very clear this author wanted to move away from the Hollywood themes and did an incredible amount of research. I don't know if I have read an account like this one before. So much focus is on the girls making the accusations, the reasons why they made them, and the absolute hysteria that followed, that the trials only get a cursory glance, so I found the book educational and revealing.
It is hard for many of us to read history books that are written in this manner. I wonder if the author added the brief fictional stories in an effort to off set the classroom history type format the rest of the book contained. It can get a little dull at times and it has taken me a while to get through this one. I just put it down and read something else for day or so and then picked this one back up. I'm glad I was allowed access to this book via Netgalley and I do wish more books written on this subject had less of the "Crucible" type focus and placed more emphasis on this type of material. This is such a strange time in our history and it's still so shocking. I would like to say we learned something from The Salem Witch Trials, but sadly it seems history has repeated itself in one form or another in this same way.
This one is a 4 star rating. 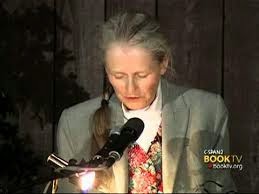 Marilynne K. Roach works as both a historian and illustrator. illustrations, how-to articles, and travel pieces have been featured in the Boston Globe. lectured to groups ranging in age from kindergarteners to senior citizens, and is the author of the classic The Salem Witch Trials: A Day-by-Day Chronicle of a Community Under Siege.