A CROUTON MURDER BY J.M. GRIFFIN- REVIEW AND GUEST BLOG 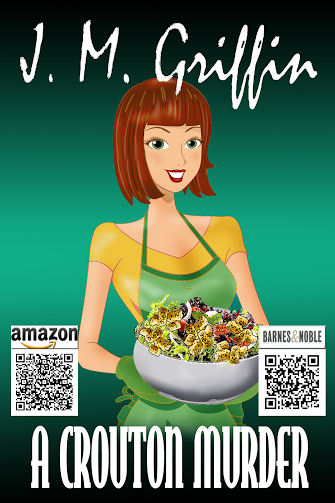 BLURB: Meet Melina Cameron. Baker extraordinaire and killer crouton maker. When Franklin Seever, the father of Melina’s best friend BettyJo, is poisoned from eating Melina’s fresh baked croutons at a dinner party, a police investigation once again targets Melina. But Melina has learned her lesson after finding her landlady lying in a pool of blood, and with a crusty piece of bread protruding from her mouth, just a few months ago. If there is one thing Melina is aware of, it’s that you never really know people until you break bread with them. BettyJo’s dad, a wealthy banker, already disliked Melina before the crouton calamity. What’s he going to think of her now that his life is hanging in the balance? Out of the bread pan and into the fire for Melina as she tries to keep BettyJo from freaking out about her dad, and engages in keeping her safe from a weirdo stalker. And wouldn’t you know it? Just when Melina’s life couldn’t get more twisted than a loaf of braided bread, the sexy Scotsman, Aidan Sinclair once again arrives on her doorstep with a smile on his face and an offer that could change Melina’s life forever. BIO: J.M. Griffin/Dana Stone grew up in rural Maine. She relocated to Rhode Island and lives in the north western part of the state with her husband and two cats. J.M.'s first published novel For Love of Livvy, began a series of humorous mysteries featuring Lavinia "Vinnie" Esposito. J.M. has also written a romance under the pseudonym Dana Stone. ONLINE LINKS: • Blog http://mycozymysteries.blogspot.com • Facebook danastone.5815 • Twitter mycozymystery BUY NOW LINK: • Amazon http://tinyurl.com/mn8fpj4 Button HTML Code:

A Crouton Murder by J.M. Griffin
My rating: 4 of 5 stars

A Crouton Murder by J.M. Griffin is a 2013 Lachesis Publishing release. I was provided a copy of this book in exchange for an honest review.
Melina and the gang are back in this Deadly Bakery short story. Melina's friend BettyJo's father is poisoned while eating homemade croutons Melinda had personally made. Now she is suspect number one. If that weren't enough, her relationship with Aiden is up in the air and Melina's grandmother has her heart set on moving to Scotland.
This second book in the series sort of picks up where the first book left off. We know BettyJo has issues with her father who is very disappointed that his daughter isn't in the banking business pulling in huge sums of cash. BettyJo and her father argue a lot but that doesn't mean she wanted him dead. But, Melina and BettyJo are not the only suspects. Who else may have wanted to poison BettyJo's pompous father?
Melina's feelings toward Aiden are a mystery to me. He seems besotted but she seems rather reserved. A stunning turn of events will have you wishing for that third book in the series to come along Right Now!!
A very light, fun cozy mystery that will have you wishing for the smells of homemade baked bread. This one gets 4 stars. 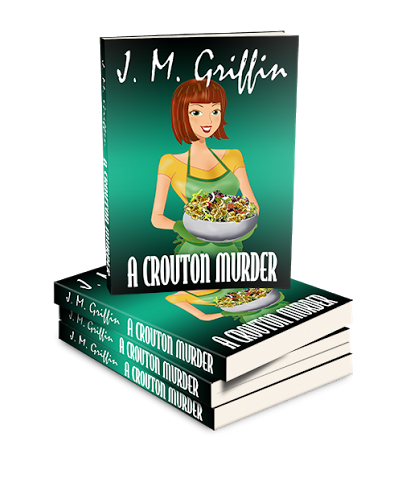 GUEST POST:
THANKS J.M. GRIFFIN FOR  JOINING ME AT THE BOOK REVIEW TODAY!
YAWN!
As a storyteller, and avid reader, it’s always an honor when somebody asks if I’d read their book and give them an honest opinion. On the down side of that, is the thought that the book might not be to my liking, it might have unresolved issues, and then there’s the fact that we might be friends (or writing acquaintances) and to be fair, the review might need tempering along the way. With that said, I realize my novels may seem to suffer from some of the aforementioned issues, as well, so I try to keep that in mind when giving a review. Cruelty is never part of that honesty, not ever, and I’m happy about that.
When reading a stand-alone novel, I can usually rest assured there won’t be any repetition of facts, at least I hope not. What bothers me about series novels is the fact that the author will repeat past happenings (and does so way too often) over and over, filling three or four pages with occurrences that aren’t necessary, and makes me yawn. It’s annoying, and I figure, if a reader’s interest is piqued enough, they’ll buy the rest of the series and do so happily. That’s not to say references to something that happened in a previous book shouldn’t be mentioned, just mention it in passing or that introductions of the main characters aren’t necessary, mainly because if this is the first time a reader has begun the series, they won’t have any idea who is who, etc.
Writing, rereading, and editing are part of the process that every author does (at least, I hope so, LOL). We write, rewrite, rear, reread, edit and edit again until we are so tired of the story that we just want to be done with it for a while. That really does happen, no fooling. When we’ve taken a brief respite from the novel writing, editing, and whatever, process, we come back refreshed and with new eyes to look at the story, see what needs fixing or cutting and then have a go at it. All said, it’s fun to be in that mode, and more fun when the editor gets her/his hands on the book and finds little to change or fix.
What’s your take on the issue of prior happenings being repeated until you yawn? I’d be interested to know. Thanks for stopping by today!