MAID MARION AND THE LAWMAN BY DEB STOVER 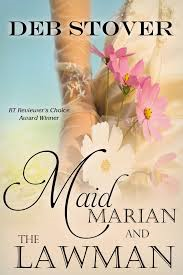 Maid Marian and the Lawman by Deb Stover
My rating: 4 of 5 stars

Maid Marion and the Lawman by Deb Stover is 2013 Bellebridge Books publication. I was provided a copy of this book by the publisher and Netgalley in exchange for an honest review.
Lawman Shane Latimer is out to find the "Robin Hood" that has been committing robberies when his horse is spooked by a snake and he winds up in the home of "Maid Marian" while she tends to his snakebite. He learns that Marian's brother is the infamous Robin Hood and he has special needs. While Robin and his Merry Men may really be guilty of a little wrong doing, they are well meaning and very gentle souls. Mary herself has a few dark secrets and her attraction to Shane has her thinking about a man the way she hasn't is a long time. The same holds true for Shane, but he is a lawman and he can't in conscience let Mary's brother continue to commit robberies.
Once Shane, who Mary and Robin believe to be someone else, begins to see the situation for what it really is, he realizes he is in love with Mary and has begun to respect the Merry Men. On a more ominous note, a very dangerous criminal is on the loose and Mary , Robin and the gang are in very serious peril. Sooner or later Shane will have to confess to Mary who he really is and what his original mission was. Will Mary be able to forgive him for deceiving her?
This story was so sweet and heartwarming. While this is a Western Historical Romance, the legend of Robin Hood is interwoven in the story because Mary and Robin grew up hearing these stories from their father. They were even named after the characters in the story. While there is a fairytale quality to the story, there are very dark elements as well. Mary is a survivor of a horrible crime and has had to rescue her brother and some of his friends from an institution. She has vowed to protect her brother no matter what the cost.
I loved Mary's character, she was strong, compassionate, sweet and kind. She had real mettle when she had to and proved it when push came to shove. Shane is a man torn between his duty and his love for Mary. He has allowed her to believe he as someone he wasn't and will have to prove to her that he loves her and would never hurt her in any way. But, before their issues can be worked out, they must rescue Robin and that will mean putting themselves in grave danger. So, this book has a action, adventure, lots of zany and off beat characters, sweet and sexy romance, humor, and of course a wonderful Happy Ever After!
I did get just a little confused with all the aliases being used and who was really who and what they were doing in this situation because some of these people were simply not your usual western romance type character. But, these secondary characters all had a unique story of their own and so there is more than one HEA.
Overall I will give this one an B+ 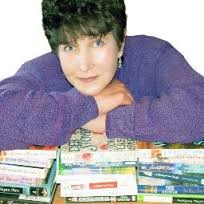 Once Upon a Time, Deb Stover wanted to be Lois Lane, until she discovered Clark Kent is a fraud and there is no Superman. Since publication of her first novel in 1995, Stover has received dozens of awards for her work, and published more than twenty books with additional contributions to anthologies. Her work has been published internationally in several formats and languages.
A native of Wichita, Kansas, Deb and her family have called five states home, but recently she made the choice to follow the Yellow Brick Road back to her roots. There's no place like home, after all, and there's always another story to tell.
For more information, please visit www.debstover.com.