INSIDE PASSAGE BY BURT WEISSBOURD

Inside Passage by Burt Weissbourd
My rating: 4 of 5 stars

Inside Passage by Burt Weissbourd is a 2013 Rare Bird Books publication. I was provided a copy of this book in exchange for an honest review.

Corey Logan has just been released from prison and wants nothing more than to avoid the man that set her up and to be with her son, Billy. She has to check in with a therapist as a condition of her release. After meeting Abe, she doesn't feel like this soft spoken, seemingly out of touch man would be the best fit for her. After shopping around some more, she finds herself back with Abe.
Meanwhile, Corey is having a great deal of difficulty getting her life back on track. For one thing she can't get custody of her son and he is a little upset about the situation. He has gotten himself into a bad situation on top of everything else. There is Nick to worry about at all times. Since Corey knows Nick's darkest secrets, he needs to silence her once and for all, especially now that he is running for political office.
Abe is smitten with Corey and although skeptical at first of her story, he begins to see the possibility she may be telling the truth. To add insult to injury, Abe's mother is dating none other than Nick Season!!
Nick is one smooth talking criminal. He can smile, and weave a very believable story that will have Abe's mother totally convinced in Corey's guilt. Abe is a man easily dismissed by others due to his mild manners and soft way of speaking and unassuming personality. But, Abe is also a man in love and he will stop at nothing to see that Corey is freed from Nick and is able to live without fear so she can enjoy a new life with her son... and hopefully with him.
We know Corey is set up and is in danger after her release from prison. I couldn't help but feel bad for her when she attempts to reconnect with her son. She has to work in a mundane job and keep a low profile. When her son gets into trouble and Corey must step up to save him, another curve ball is thrown into her path forcing Abe to face up to his feelings for her and decide if she is telling him the truth or if he is being conned.
Nick is so smooth, he even had me wondering what the truth was. Thankfully, Abe is more decisive . Abe is not the type of guy one might imagine taking on the dangerous men after his lady and her son, therefore no one really worries too much about his presence in Corey's life. As it turns out, Abe may have a few smooth moves of his own.
I enjoyed this first book in a planned trilogy featuring Corey Logan. Fast paced and action packed, but with a tender side as well. The love a mother has for her son, the love a man has for a woman and the need to see justice done is the glue that holds all it all together and makes the story so compelling. Abe may not have been some beefed up Alpha male, but his brain made him really sexy as did his courage. Now, Abe's mother on the other hand was a different story. She wasn't necessarily a bad person, but she had judged a book by its cover where Corey was concerned. This was how easily she stepped into the trap Nick so easily made for her. I wanted to somehow grab her attention away from Nick and talk some sense into her. Billy is a typical young adult that has been dealt a few bad hands in life and had no real guidance. This gets him into trouble, although he has a girlfriend and he wants to be a good guy. So, many characters in this novel find themselves walking on thin line between right and wrong. I'm really looking forward to the next book in this series. Oveall this one is an A. 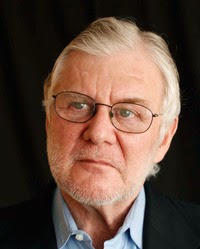 Burt Weissbourd is a novelist, screenwriter and producer of feature films. He was born in 1949 and graduated cum laude from Yale University, with honors in psychology. During his student years, he volunteered at the Museum of Modern Art in Paris and taught English to college students in Thailand. After he graduated, he wrote, directed, and produced educational films for Gilbert Altschul Productions. He began a finance program at the Northwestern University Graduate School of Business, but left to start his own film production company in Los Angeles. He managed that company from 1977 until 1986, producing films including "Ghost Story" starring Fred Astaire, Melvyn Douglas, John Houseman, Douglas Fairbanks Jr., and Patricia Neal, and "Raggedy Man" starring Sissy Spacek and Sam Shepard, which The New York Times called "a movie of sweet, low-keyed charm." In 1987, he founded an investment business, which he still runs. INSIDE PASSAGE is the first in the Corey Logan trilogy.
Posted by gpangel at 1:00 PM