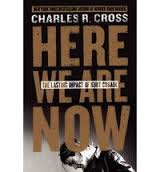 Here We Are Now: The Lasting Impact of Kurt Cobain by Charles R. Cross
My rating: 4 of 5 stars

Here We Are Now by Charles R. Cross is a 2014 Harper Collins publication. I was provided a copy of this book from the publisher and Edelweiss in exchange for an honest review.

"When you wake up from your dream, that haunting red Line One button is still flashing, still waiting for you. And he's still gone"

It has been nearly twenty years since Kurt Cobain's death. With the group , Nirvana, about to be inducted into the Rock & Roll Hall of Fame, it is fitting that this book takes us back to the time when music changed forever and how Kurt Cobain's influence is still pertinent today.

In the late 1980's the music industry was all about cheesy videos, hair metal, and synth pop music. When Nirvana broke through the underground music scene to take the music industry by storm, no one could have imagined what an incredible and long term influence the group, their music and their front man Kurt Cobain was have.
This book explores the beginning of "grunge" music , Kurt's sudden success and the impact it had on an already fragile personality. We study the impact on fashion- the flannel shirts and ripped up jeans, which Cobain never intended as a fashion statement, culminated with a six thousand dollar trench coat. The influence this style would have on Eddie Vedder ( Pearl Jam) and Layne Staley ( Alice in Chains) who mimicked Cobain's low key clothing choices.

Naturally, the drug addictions and the suicide had to be touched upon. Cobain was sensitive and had physical ailments and a predisposition to suicide. He had a hard time with fame . None of that is news, but you can't talk about Cobain and leave that out.

The main focus of this book is to remind us of the huge and long lasting effect that Cobain and Nirvana had on music, lifestyle, fashion and still holds a special place on the heart and minds of a generation. Fans, to this day, do not have a sense of humor about Cobain and do not like anyone using his image for something he never represented in any way. Take for example the Doc Martens ad that sparked such controversy. It's telling that people felt so very strongly about it.

The author speculates that Kurt Cobain was perhaps the last rock star. With you tube, MP3s, streaming, downloads all having an impact on the way people experience music, "Never Mind was one of the last albums that had such an enormous impact. Cobain was the last person that put a face and voice to a new generation. Since then, no one has come along that has made such ripple. I would have to agree with the author on this one.

I enjoyed reading the statistics the author pointed out about Never Mind, Nirvana, and Kurt Cobain. It was an eye opening observation for me. I didn't really jump into the grunge movement at the time it was so popular. I was married and raising two small children. Music in my house was tame and benign and it wasn't until my children started to listen to rock music that I really listened to Nirvana. Again, that is really telling. Kurt has been gone for some time by then and my son was really into this group and to this day is one of biggest Alice in Chains fans. It wasn't until I read this book that I really understood the impact Nirvana had on our culture.

I recommend this book to fans of Nirvana, and Kurt Cobain, but also to those that enjoy reading pop culture history, performance arts books and books about music in general. 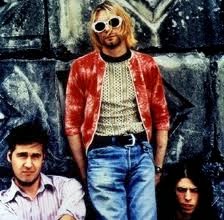