SEDUCTION OF A BLUESTOCKING BY SCARLETT RAINS 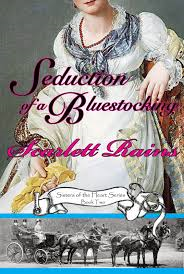 Seduction of a Bluestocking by Scarlett Rains
My rating: 4 of 5 stars

The Seduction of a Bluestocking by Scarlett Rains is a 2011 Artemis publication. I was provided a copy of this book in exchange for an honest review.
This second novel in the Sisters of the Heat series is an alternate view point to the first novel, Promises of the Heart. The first book focuses on the life of Amelia as she grows from a child into her teenage years. In this second book, the focus is more on William and Rachel and thier romance.
The same events take place in the second book as did the first. Rachel's fiance dumps her with a flimsy excuse and marries someone else. Rachel takes the job as Amelia's governess and shortly thereafter, Amelia's parents die, leaving Amelia the ward of William Seaton. Although Amelia refers to William as her uncle, in truth he is not related to her by blood.
William's wife died in childbirth leaving him with two sons to raise. William also has an old enemy that may come back to cause problems for him. Meanwhile, William has found Amelia's governess quite frustrating. They get off to a rather bumpy start, but over time William begins to feel something for Rachel that she obviously doesn't feel for him... or does she?
The story winds up in the same place as the first book only with a little surprise for William and Rachel. We will next turn to the drama involving Amelia and the prospect of her leaving home and attending finishing school.
If you read the first book and you liked it, you will like this one too. This book can be read as a stand alone. You can read this one first and then read the second or vise versa with out spoiling anything for yourself. This concept of writing the same story only from the POV of different characters has been done before. It can work for you or against you. For me this book didn't really reveal too many new details. It was simply a more adult version of the first novel. The feelings William had about his first wife's death will play a role in his relationship iwth Rachel at some point and he will have to face his fears for her sake.
I thought this book was just as good as the first one and it was fun to read the story from the adult perpective and gain a little insight into the relationship between Rachel and William we didn't have before.
Overall this one is a B+