PROMISES OF THE HEART BY SCARLETT RAINS 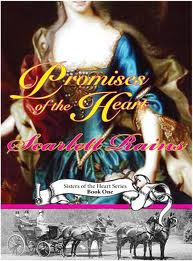 Promises of the Heart by Scarlett Rains
My rating: 4 of 5 stars

Promises of the Heart by Scarlett Rains is a 2009 Artemis publication. I was provided a copy of this book by the author and publisher in exchange for an honest review.
After being publically humilated by her fiance and the wedding called off, Rachel takes a position as the governess for Amelia Fitzailwyn, the Duchess of Keningston. Shortly thereafter, Ameilia's parents die leaving her the ward of her Uncle William.
Ameilia and Rachel move in with William and his two sons. Initially, Rachel is concerned she may lose her position, especially since she and William got off to a bit of a rocky start. However, after some time they all settle in very nicely.
As Rachel begins to grow up, William is faced with the dilemma of what to do about Rachel. Soon Amelia will need to go to school and will no longer require a governess. But, William doesn't want Rachel to leave. There is also the little matter of William's real relation to Ameilia. When a certain delicate situation arises involving a member of the staff, Rachel makes a stand and she and William do not agree. When Rachel takes drastic steps to make her point, William is forced into doing what he should have done a long time ago.
Amid the backdrop of Georgian England this coming of age story follows Amelia from a young girl into her teenage years. Through it all her cousins have been like brothers to her. When she begins to attract the attention of the opposite sex, they become really protective of her. Amelia isn't all that happy with these developments. She feels they are interfering in her personal life and have no right to. But, when Amelia is put into what could have been a compromising situation and her cousins tell William about it, Amelia finds herself in a position she never dreamed she would be in.
This first novel in the Sisters of the Heart series gives us a glimpse of Amelia's rather unorthodox upbringing, her headstrong nature and the close bond she has with Rachel. While Amelia has been indulged quite a bit, she must at some point become an adult and learn to behave as a lady. This will mean that she much leave home and Amelia has never been away from home before. Rachel and William put this task off as long as possible because they know Amelia is terrified of being sent away. Will her behaviour cause them to change their minds? What about her attraction to her "cousins"? Is one of them or both of them in love with with Amelia or do they still think of her as a little sister?
What about Rachel and William? Will Rachel ever realize how William feels about her?
This is a delightful story that will lead us into the next two novels in the series. Rachel was a very pragmatic woman, never giving in to her romantic side after her very public breakup. She insist on keeping things proper and on a professional level with William although he attempts from time to time to get her to relax a little.
William is a man with a few secrets which could lead into a little danger and intrigue. He is at a loss as to how to handle the situation with Rachel and a little bit unsure of how to handle Amelia. He pretty much leaves all that to Rachel until the time comes when he has to step up and make some hard choices.
The sons- Alex and John are as different as can be. John is studious and Alex is a ladies man. Each has a soft spot for Amelia and it becomes more obvious as Ameilia gets older. There could be feelings there neither of them have really examined until now.
And Ameilia? At once a delight and frustrating and moody and selfish and spoiled and very unconventional. We see her go through good and bad times, have adventures, get into trouble, and is always there with a very healthy dose of curiousity and is incredibly nosy. She is strong willed and hard headed, but deep down she has a big heart and as the story comes to a close, we are feeling her confusion and fear as she is about to embark on a new chapter in her life. Stay tuned!
I liked how different this book was from the ordinary historical romance/ fiction novels out there. This first novel is more a coming of age story. The angst of growing up, and always feeling in the dark about things the adults are talking about and having no knowledge about what boys are really like, which leads to some laugh out loud moments as well as some tense ones. As is the case so many times in the first book of a series, we are being given background information and a glimpse into the character's traits and personalities. I think the second novel will help to flesh out some of the bumpy parts. Be warned... there is a little bit of a cliffhanger and the story did leave me feeling like... Wait what just happened here? I need more! Hopefully, all our questions will be answered and to our satisfaction. But, another word of warning. It is my understanding that the second book in the series gives us a different view of this story sort of like Julia Quinn has done in some of her series- something I like to see if it is does well. But, never fear- Amelia's story is coming! I am really looking forward to finishing out this series!
I think this one is a B+.
Posted by gpangel at 2:00 AM