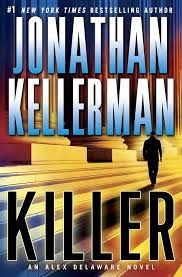 Killer by Jonathan Kellerman
My rating: 4 of 5 stars

Killer by Jonathan Kellerman is a 2014 Random House publication. I was provided a copy of this book by the publisher and edelweiss in exchange for an honest review.
Alex Delaware, mild mannered psychologist become the target of killer . Connie Sykes is out to gain custody of her niece when the child's mother left her with Connie for a while so she could go off on her own adventure . When Alex is called in the evaluate the situation, he decides the child is better off with her mother. Connie didn't take the loss well. In fact she tried to hire someone to murder Alex and ended up picking someone that Alex had treated and the guy thought enough of Alex to blow the whistle. So, the plot is foiled, but before a case can be built against Connie, she is murdered. This is when things get a little tricky.
Alex finds himself in debt to a gang banger for saving his life, the number one suspect in the murder is now MIA as well as the child, and Alex is still in danger because of all he knows. Milo is on the case of course, and Robin has digested this information quite well. She even handles it with grace and bit of gallows humor.
The case of Sykes VS Sykes becomes a fodder for the courthouse gossips. It seems everyone is aware of the case and many of the details that should have been kept inside the courtroom. The judge in the case is alerted to the possibility of a revenge plot and so everyone involved is stretched to the breaking point.
The important thing is to find the child. In the process the issue arises as to who the father is and well, there appears to be several possibilities. When more murders occur it becomes a race against time to find the child and her mother and prevent more people from being killed, including Alex.

After 29 Alex Delaware novels you would think Kellerman would have run out of steam by now. There are not too many authors that can maintain a series this long without the characters becoming boring and predictable, often running out of interesting dialogue and cases. But, LA is filled people who believe themselves to be smarter than the police or in this case a psychologist. This is one twisted messed up case and Alex finds himself in it up to his eyeballs.
There are many thought provoking issues raised in this story. The day to day courtroom dramas that should be confidential are perhaps talked about by court employees amongst themselves and pretty soon information that should be not be common knowledge is known by everyone. The people who work in law enforcement and for the system that see so many sad cases and the endless cycle of lives that go nowhere can become jaded and cynical really fast, making it hard to keep an open mind when they need it the most.
Kellerman does a great job as always of showing the darker side of human nature and the effect a lifetime of disappointment can have on people which cause them to do crazy things. The ability to paint such vivid portraits of people and their flaws always has me sucked into these stories and once I start one I can't stop reading it. I think I have read every single one of the Alex Delaware mysteries. The one thing I do miss is Milo and Alex actually out working cases together. The last two books have really been focused on Alex by himself. Milo has had a lesser role in the last two books and I miss the discussions the two men had. Robin was also on a back burner in this one. She is rarely in the spotlight exactly, but she was really in the shadows in this one. Other than that one minor complaint, this was once again an excellent chapter in the Delaware series. This one gets an A.