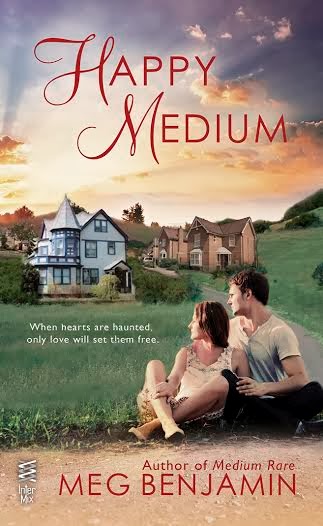 WELCOME TO THE SPOTLIGHT AND REVIEW OF HAPPY MEDIUM BY MEG BENJAMIN PRESENTED BY GODDESS FISH PROMOTIONS. LEAVE A COMMENT FOR A CHANCE TO WIN THE RAMOS FAMILY TRILOGY BOOKS.  SEE THE LINK BELOW TO FOLLOW THE TOUR FOR  MORE CHANCES TO WIN!  THANKS FOR VISITING THE BOOK REVIEW!

Love is good for the soul… unless it’s one that you’re trying to exorcise.

Ray Ramos has a problem–the King William District mansion he and his business partner purchased for a fast renovation needs more work than expected. Ray could use a quick infusion of cash. Enter Emma Shea, assistant to Gabrielle DeVere, the star of American Medium. Gabrielle is looking for San Antonio houses to use for her televised séances, and Ray’s fixer upper seems to fit.

When Gabrielle does a sample séance, Ray and Emma become the target of a touchy ghost with no respect for boundaries. After Ray learns his family has a special affinity for ghosts, the two decide to investigate the haunted house. It doesn’t hurt that Emma is immediately attracted to the laconic Ray or that Ray is intrigued by the buttoned-down beauty who seems determined to hide her considerable assets behind sober business suits. But can the two of them fight off a vengeful succubus bound to the house while getting a lot closer than either of them planned?

"Who was the previous owner?"

"His name was Hampton. Allard Hampton."

Skag nodded slowly. "I’ll see if Mr. Hampton is available for a conversation. In the meantime, you should carefully examine all the objects that were left in the house. Look for anything that might have been there in 1927. You’d be surprised at what people leave behind."

Ray frowned. "What are we looking for? What does a love token look like?"

Skag’s eyebrow arched up. "I’ve no idea, never having been a lovesick maiden. Why not ask Ms. Shea?"

Ray managed not to grimace. He had a feeling Emma wouldn’t have any more idea than he did. He couldn’t picture her as a lovesick maiden, no matter how hard he tried. "Anything else?"

"Inspect the house. That’s the most important thing you can do at the moment. Meanwhile, I’ll do my best to find out what you’re dealing with in terms of this particular ghost." He began to fade slightly around the edges.

Ray wasn’t sure he wanted to watch someone become transparent. It was sort of . . . disconcerting. "How do I get in touch with you?"

"You don’t." Skag’s teeth flashed in the dim light. "If and when I have any information, I’ll contact you."

He leaned forward in his chair, as if that could slow Skag’s transformation. "What do I do if I find this love token?"

Skag paused in mid-fade. Ray could see the texture of the chair upholstery through his chest. "You destroy it, of course. Pound it into dust. Then throw the dust into the wind."

"And then," Skag said, his voice echoing in the room, "should any of the spirit-haunted object remain, you run like the very devil."

Ray blinked again, but the ghost had finally disappeared.

.Meg will be awarding the complete Ramos Family Trilogy: Medium Well, Medium Rare, and Happy Medium (all ebooks) to one randomly drawn commenter during this tour and her Virtual Book Tour, here.


MY REVIEW OF HAPPY MEDIUM:

Happy Medium by Meg Benjamin
My rating: 4 of 5 stars

The Happy Medium by Meg Benjamin is a 2014 InterMix publication - an imprint of Penquin Books. I was provided a copy of this book in exchange for an honest review.

Ray is a contractor renovating an old house in the San Antonio, Texas area. When a young woman named Emma knocks on the door explaining she is with a television program called American Medium and she would like to film a seance in this house to see if there were any ghost, Ray doesn't know what to think. Ray agrees to the dog and pony show for the sake of all the money he's been offered. But, when the day comes for the seance, Ray is shocked that he has a real paranormal experience. Emma also felt something and after comparing notes, they both agreed something spooky was going on and it wasn't because of Emma's boss pretending to be a medium for the TV cameras.
Ray contacts his sister, Rose and gets her advice about the house. He is flabbergasted when she tells him she has had experiences with ghost before and it runs in the family. As a historian, Rose does some research on the house as does Emma. They uncover an unsavory story about one of the previous owners. This leads them all to believe they know who is haunting them.
Meanwhile, Emma and Ray find they have a chemistry between them and before long things begin to heat up. If only Emma could find a way to overcome her insecurities about her weight she would be a lot happier.
As work progresses on the house, Ray and Emma both have vivid dreams and visits from other ghost. It becomes very clear that the house is not just haunted, but something much more serious and sinister is going on. It is up to Ray and Emma to cleanse the house of the evil that dwells there.

When I first started reading this book I thought maybe I was about to start a really light hearted paranormal contemporary romance. Well, the story is much more tense than I thought it would be. There is a sensual romance with a touch of paranormal erotica, but there is also a mystery, and a really creepy old house with a serious problem .
This was a really interesting story with a little history, a lot of paranormal activity, and a love story to put the cherry on the cake. I thought Ray was really funny at times and I think he is great for Emma. Emma really deserves someone that appreciates her for who she is and thinks she is beautiful. It is my understanding that this is the last book in this series, which is too bad. I always hate to see the end of a good thing.
Overall this one is a B+ 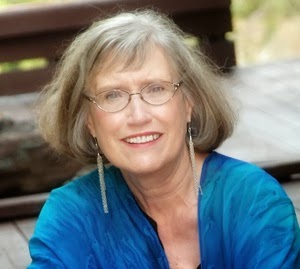 Meg Benjamin is an author of contemporary romance. Her Konigsburg series for Samhain Publishing is set in the Texas Hill Country and her Ramos Family trilogy for Berkley InterMix is set in San Antonio’s King William District. Meg’s books have won numerous awards, including an EPIC Award for Contemporary Romance, a Romantic Times Reviewers’ Choice Award for Indie Press Romance, the Holt Medallion from Virginia Romance Writers and the Beanpot Award from the New England Romance Writers. Meg lives in Colorado with her DH and two rather large Maine coon cats (well, partly Maine Coon anyway). Her Web site is http://www.MegBenjamin.com and her blog is http://megbenj1.wordpress.com/. You can follow her on Facebook (http://www.facebook.com/meg.benjamin1), Pinterest (http://pinterest.com/megbenjamin/), and Twitter (http://twitter.com/megbenj1). Meg loves to hear from readers—contact her at meg@megbenjamin.com.