THE TRIAL OF DR. KATE BY MICHAEL E. GLASSCOCK 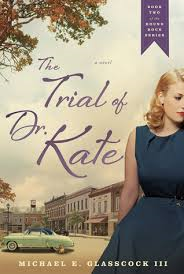 The Trial of Dr. Kate by Michael E. Glassock is an October 2013 Greenleaf Book Group Press publication. I was provided a copy of this book by the publisher and Netgalley in exchange for an honest review.

Shenandoah returns to the small town of her upbringing because she reads about one of her only friends about to stand trial for murder. Being a reporter in Memphis, she travels home to cover the trial.

It is 1952 in Tennessee, and a woman doctor is very rare. To make things complicated, it is rumored that Dr. Kate was having an affair with her best friend's (and also her patient) husband Army. There is also the fact that Kate is a functioning alcoholic and doesn't recall her actions on the day in question.

Meanwhile, people have not taken well to Shenandoah's return home. She is the only one in her family that is sober and has made something of herself. Someone is angry enough with her to try to run her off the road, and slash her tires.
Kate meets a guy, starts to have tender feelings for him, investigates the suspicious death of Kate's patient, a woman that was terminally ill, and discovers the many secrets of small town life.

In a small southern town in 1952, the attitudes toward women, race, and class are shocking and offensive by today's standards. The illegal running of alcohol was a full fledged career. But, there was also a feeling of nostalgia. The soda fountain serving a chocolate malt, going for a hamburger was a hot date, the ability to work on your own car, and so many other things signaling a slow pace of life.
The mystery of Dr. Kate - if she committed an act of kindness by performing an assisted suicide for her best friend who was dying of MS and advanced colon cancer or did she murder her in cold blood so she could have her husband? Did Dr. Kate do anything at all to her patient? There were others that could have had a motive for wanting the victim out of the way.

I enjoyed reading about the characters in this book. Things were more pleasant in the fifties in some ways, but the narrow mindedness and racism, sexism, the archaic medical procedures, the laws, and the travel barriers made the idealist time period seems overly harsh in many ways.
The rush to judgment against a doctor because of her sex and vicious small town gossip was an example of the times.
Each character in the book has their good and bad points. Kate was a savior to many who couldn't get to a city hospital fast enough, to those who didn't have money to pay her, making house calls, and so much more, but she was also grieving the death of her father and battling an addiction on her own and trying to keep it quiet.
Shenandoah will be haunted by her return home and the trial of her friend, Kate for the rest of her life.

There were many hot issues on the table here. Women having careers was frowns upon under ordinary circumstances, but having a career as a doctor was unheard of. The suffering of a terminal patient tempting those in the medical profession to show them mercy was also a theme. This was something no one in 1952 spoke of.
Old wounds were healed and some good does come from the events that are told in the novel. But, the lessons are hard ones and it will be years before some sense of closure will take place. For Shenandoah that time will hold a bittersweet place in her heart even into her old age.

Overall this was an interesting historical fiction/mystery. I give this one a B.
Posted by gpangel at 3:30 PM