THE LAST OF THE SMOKING BARTENDERS BY C.J. HOWELL 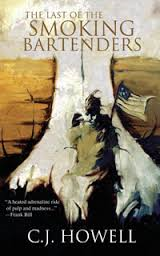 The Last of the Smoking Bartenders is a 2013 New Pulp Press publication, written by C.J. Howell.

Tom, disguised as a homeless man is on a mission to save the Hoover dam from a terrorist attack. He must not give himself away by using a bank account, credit cards, or anything that could be traced back to him. When Tom meets up with Lorne, an outgoing fellow originally from Florida, Lorne suggest they head out west for a road trip. He never imagined what lay ahead when that spur of the moment idea struck him.

The two men embark on a journey that lead them to more zany, off beat characters,meth and all assortment of drugs and extreme violence. Tom makes some kind of weird sense at times and at others you will believe him utterly insane.
They aren't under the radar . The feds are out there too, always right on the cusp of grabbing them. They cross paths at different times while Tom and Lorne and the gang reek havoc on Tom's "mission".

Ultimately it is up to the reader to decide what was real, what was drug fueled hallucination and what was just flat out insanity.

If you like crime, road trips, odd ball characters, and the new wave of pulp fiction, you don't want to miss this one. It's been a long time since I've been on a road trip. After you finish this one you will need a period of reflection and maybe some down time.
Well written, visual, and totally off the beat path. Once you start this one, you won't want to put it down.
There were a few moments when I did feel a little confused by a thought or action. This may have been choreographed by the author, but it slowed the pace and this book was intended to move quickly. Other than that I think this is an outstanding novel. It will really make you think. Overall this one is an A.
Posted by gpangel at 12:00 AM