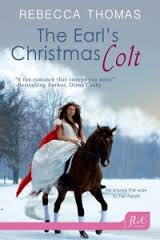 
Lady Arabella Sutton is stunned to learn her brother has betrothed her to a stranger despite his promises for a season in London. Although she is the first to admit no man would suit, since she’s more interested in horses than marriage, the last thing she wants is to become a brood mare to a stuffy old earl. Facing a future she cannot abide, she takes an impetuous ride to clear her head and ends up tending her injured mare instead.


Oliver Westwyck, the Earl of Marsdale, can’t believe his luck when he stops at an inn the night before he’s to meet his fiancée. In the stable, while tending the colt he intends to give to his future wife, he happens upon her—rain-drenched but beautiful. She assumes he’s a stable hand, a fine joke he means to end...until Lady Arabella declares all noblemen are egotistical, conceited, and arrogant. How can he reveal his true identity before he’s managed to change her mind and win her heart?

The Earl's Christmas Colt is December 2013 Entangled Flirt publication. I was provided a copy of this book in conjunction with a book tour in exchange for and honest review.

Arabella, an independent woman and a great lover of horses and riding, has been summoned by her brother to meet him in the library. This is going to be bad news. Sure enough Arabella is told she is to be married. Her brother has found a match for her. Furious about the way this all happened and that she is about to lose her freedoms, Arabella rides off only to have her horse throw a shoe.

Oliver is on his way to meet his fiancé. Her brother has warned him that the lady may be reluctant to marry. Having been told his fiancé loved horses, he brought her a gift- a beautiful colt. Before he can arrive at his destination he finds a lady stranded and is stunned to find she is his fiancé. The lady has no idea who he is and he allows her to continue on in ignorance, leading her think he is a horse breeder.

Arabella and Oliver discover they rather enjoy one another's company, but what will happen when Arabella discovers who Oliver really is?

This Christmas themed historical novella is a sweet story of two people who thought they would never have a love match, finding each other in an out of the ordinary way. Arabella is a person we feel a righteous indignation - on her behalf. Being forced to wed someone she never met and feeling trapped. Oliver is not a person I felt one way or another about initially. He is knocked back on his heels when sees how beautiful his fiancé is and once he gets to know her he realizes that he WANTS to marry her, not as a business arrangement or provide an heir, but because he loves her. However, Arabella is going to take some convincing, especially after she discovers his deception.

This romance is perfect for a lunch break read, or if you are in the mood for a wintery romance with snow and a holiday atmosphere.
This story could be enjoyed at time though, since Christmas is just a backdrop to the setting. If you like regency historical romances you will like this one, I'm sure. 
I enjoy a love-hate relationship with Alaska, where I live with my husband and two teen-aged sons. While I struggle with some aspects of the 49th state (darkness, cold) I have grown to appreciate the unique things the last frontier has to offer (no traffic, 24 hour daylight, privacy). When I’m not reading, writing, or playing board games, I’m cheering for my sons at their hockey games and tennis matches. I write historical and contemporary romantic fiction and I’m a member of Romance Writers of America.


My first book, a historical romance, will be available on November 25, 2013.


The Blacksmith’s Son is with Entangled Publishing’s Flirt imprint.


Awards: My work has won first place in the Ignite the Flame, Emerald City Opener, Gateway to the Best, and Merritt writing contests.


INTERVIEW WITH REBECCA THOMAS
Thanks so much Rebecca for taking the time out to visit us today!

1) In this historical novella, Arabella is a horse lover. Is horse riding something you enjoy or something you would like to try?

A horse will carry you to the ends of the earth without complaint. Without food, water, comforts, or attention of any kind, they will still carry you. I used to own my own horse, but unfortunately due to financial reasons I had to sell her. Horses are, in my opinion, the world’s most beautiful creatures.
2) When writing historical romances, what references do you use for research?

I use the internet a lot, but I also have three reference books within easy reach. No matter how many times I’ve read them, it’s still easy to forget little details, so a regular paperback reference book beside me is always a good idea. But having said that, I’m sure my historical details aren’t completely accurate 100% of the time. I do take some literary license when necessary 

4) Do you enjoy other romance genres?

5) What are you working on now?

I am working on a sequel to The Blacksmith’s Son (my debut historical romance novella) and a contemporary New Adult romance set in Alaska.

I assume you are asking about an excerpt from The Earl’s Christmas Colt?—if so, here ya go:
About to unleash his displeasure with her, instead Oliver’s chest tightened. Drops of rain fell off her lashes and spilled down her pale cheeks. She looked like a beautiful, sodden, street urchin. "I’m making sure you get home safely."

"I wasn’t aware you were my keeper, Mr. Carrington."

If she only knew he’d be keeping her from this day forward. He continued to ride alongside her while determining the best way to proceed.

Her dark brows furrowed together in a V and she yelled above the sound of the rainfall, "I’m not going home yet. It’s too far. I won’t make it there before dark. So go on back to the inn. I don’t require your assistance."

The pinch in his chest moved to his fingers and he wanted nothing but to drag her off her horse and shake some sense into her. Did she really think it was acceptable to ride across the country in inclement weather, in the near dark and unescorted? What kind of woman had he agreed to marry? For the first time since meeting her, he wondered if maybe he’d made a mistake. "It is not appropriate for a lady—"

"None of this is your business. I’m not your concern." Smudged with fatigue, her wide eyes stared up at him. Through the rain, anger flickered across every corner of her face. She sucked in a shaky breath. "Mr. Carrington, I appreciate your concern, really I do, but I had to leave the inn."

"Had to leave? With night falling and a storm raging? You could have been killed! That river crossing alone was enough to unseat an inexperienced rider. Nevermind the wind and rain."

She opened her mouth to speak, but he leaned in closer to her mount and grabbed hold of the reins. "I told you I would secure a room for you. Why did you run away?"

Emerald green eyes narrowed at him. "I’ve no need of escort, nor do I owe you further explanation. The stable lad should have explained to you. Besides, I am on Sutton lands now. I know these woods like—let go of my horse’s bridle."

Oliver stared at her, unmoving, refusing to release the leather.

Was that fear in her eyes? Or fury? He freed his hold on the reins and scolded himself for his irrational action. He didn’t wish to frighten her.

She turned down a less traveled road.

He wanted to ask where she was going, but thought better of angering her further. A stone cottage appeared in the mist amongst the trees, answering his unspoken question.

She dismounted and glanced over her shoulder at him. If she was surprised he still trailed her, she didn’t show it. Her posture was ramrod straight as she led her horse to the stable.

Once he’d dismounted and joined her inside the small enclosure, Oliver said, "Do you have any idea of the worry you’ve caused me?"

She flexed her jaw as though choosing her words with care. "Sir. I’ll say again that you are not my keeper. I’m safely to shelter now. You’ve no reason to worry."

She spoke with confidence, but a small amount of distress laced her tone. Good, maybe a touch of fear would serve her well when making future decisions. In frustration, Oliver grunted. "Why did you run—"

"I’m not running, I simply left." Her voice shook. "Now you must leave this instant. I can take care of myself."

Her face paled and Oliver’s guilt over not confessing his identity hit him over the head like a shovel. He noticed something else as well. Something real and very tangible, something he was not yet ready to name, lay between them. He wondered if she felt it, too.

Thank you for having me as a guest on your site!

Giveaway: 10 e-book copies of The Blacksmith's Son by Rebecca Thomas