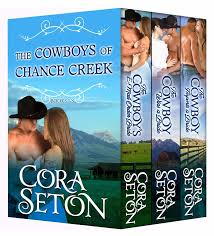 The Cowboys of Chance Creek by Cora Seton Volumes 1-3 is a box set that contains: The Cowboy's E-mail Order Bride, The Cowboy Wins a Bride, and The Cowboy Imports a Bride. Each book is approximately 200 or so pages in length.

The first book is The Cowboy's E-Mail Order Bride-
Ethan has been ditched by his fiancé and in a night of drowning his sorrows he tells his buddies what he thinks would make a good wife. Little did he know his best friend Rob was recording everything he said on his phone, nor that Rob has decided to post it to you tube. The next thing he knows Autumn Leeds has shown up accepting his offer of marriage, home life on a ranch and promises to provide him with babies.
While Ethan's friends are laughing about the joke they played on him, they never gave a thought to who Autumn might be and why on earth would she answer an online ad for a bride. Autumn does have her own agenda.
The joke plays out longer than Ethan had planned. His ranch is having financial problems and he can't afford a wife. He needs to tell Autumn the truth, but the problem is he and Autumn seem to find this marriage of convenience to their liking after all. But the secret they are both hiding will have to come out sooner or later and when it does....

The Second book is The Cowboy wins a Bride. Jaime has loved Claire a long time. But, Claire is going to see her brother, Ethan, married, then she is going to take off for a trip around the world. Jaime is desperate enough to propose a little bet with Claire. If she will wait six weeks and give him a chance , he will pay for her ticket around the world if he loses the bet. Claire thinks that offer is too good to pass up. There is one hitch, however. Jaime is a world class flirt. For the next six weeks he will have to avoid any and all types of flirtation.
Claire goes on about her business never giving this bet thing another thought. She knowa she will win the bet. There is no way, no way, no way Jaime will be able to curb his flirty nature, much less convince her to marry him.

The last book is The Cowboy Imports a Bride. In this book Rob gets his comeuppance for all those practical jokes. People do not believe he is capable of being serious, holding down a serious job or being serious about just one girl. But, Rob is pining over Claire's half sister, Morgan. When his father announces he will give 200 hundred acres to the first son that gets married, Rob makes a beeline to Morgan. She gives Rob three things he must do in order for her to marry him. One is to cherish her, one is to help her start her own vineyard and the other is to start a family. Rob readily agrees. But, things get complicated when he tells his family what his plans are. His dad swears there is no way his land will ever be tilled for a vineyard. So, Rob finds another solution only to have that blow up in his face as well. Together Rob and Morgan will have to decide if they should still marry or if they will let their families drive them apart.

While some of the titles of these books may sound a little cheesy, these are really good contemporary western romances. The second and third book were my personal favorites. Claire was the most fragile character of the three women featured in the box set. She still has anger issues in the third book and is still afraid of the future, but she does get her questions answered and is the one to bring all the hurt and anger to an end to help the families stay together and work together for the future. There are other novels in this series and I am really looking forward to reading those. Once you get started on these you won't want to put them down. I practically read the whole box set in one sitting. I think you get a lot of bang for your buck by getting all three books in one purchase. Having said that, you may purchase one book at a time as well. Overall this one is an A. 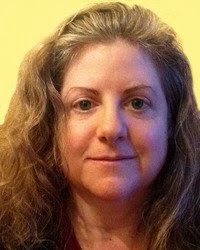 About this author
Cora Seton loves cowboys, country life, gardening, bike-riding, and lazing around with a good book. Mother of four, wife to a computer programmer/eco-farmer, she ditched her California lifestyle eight years ago and moved to a remote logging town in northwestern British Columbia.

Visit www.coraseton.com to read about new releases, locate your favorite characters on the Chance Creek map, and learn about contests and other cool events!
Posted by gpangel at 4:20 PM