SOMEBODY TO LOVE BY LORI WILDE 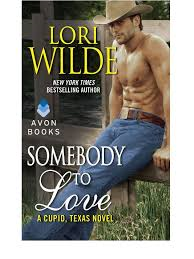 Somebody to Love by Lori Wilde is a December 2013 Avon publishing release. I was provided a copy of this book by the publisher and Edelweiss and Lori's Review Crew in exchange for an honest review.

Cupid is town steeped in romantic legends. Zoey and Jericho have grown up together. Jericho is a few years old than Zoey, making it easy to maintain a platonic friendship all these years. However, the two had a moment when the scales might have tipped in the other direction. They righted themselves and went on as though nothing had happened. Being apart geographically helped them in that regard. Now, Jericho is back hoping for a job at the university to lead an archeology dig. It just so happens Zoey has also acquired an interest in archeology. Zoey doesn't stick with things too long though and no one takes her seriously. To prove herself she makes a deal. She will stick to the job or else lose her trust fund.
The hardest thing for Zoey is that Jericho can't become involved with one of his students or he will lose his job. This means they have to stay apart through the entire job. They've managed that their entire lives, but now.....

This is a sweet friendship to romance contemporary romance. The local legend of Cupid that makes the place so charming isn't the only legend. There is a much darker legend no one talks about. Zoey and Jericho are linked to that legend through their lineage. A Romeo and Juliet type story that has Zoey worried about their chances a couple.
Often flighty, Zoey learns that she can stick to something when she needs to and wants to, despite what others may think of her. Jericho compliments Zoey's personality by being more stable and serious. They two of them will uncover another secret while on their dig that is a secret someone may be willing to kill for.
Mostly, though the story is very light hearted and steeped in history. The Cupid series is a lot of fun. If you enjoy light contemporary romance, don't miss this one!
Posted by gpangel at 3:00 PM