MUCH ADO ABOUT DUTTON BY CLAUDIA DAIN 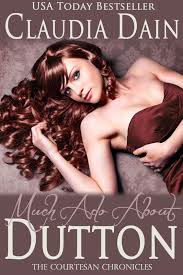 Much Ado About Dutton is 2013 release written my Claudia Dain. I was provided a copy of this book by the publisher and Netgalley in exchange for an honest review.


Set in London in the year 1804, Anne, Lady Staverton has returned to Dalby House after a two year absence. Now a widow, Anne has become an viscountess. She is meeting with Sophia, her long time guardian and best friend. The two women have vowed to have a little bit of fun with a couple of men that should be toyed with and managed and then tied tightly around their fingers.
For Anne that would be Dutton. While Anne wanted Dutton, she wanted him on her terms. She was free now to do what she wanted and taking a lover was the way she wanted things. She never wanted to give up her new freedom and the beginnings of a confidence she was surprised to find she had.
Dutton had a terrible reputation as a womanizer and a gambler. Now, however he was sober and Anne still captured his attention like no other woman ever had.
As for Sophia, she will enjoy a flirtation with Lord Ruan. Lord Ruan will be a big help to Anne in giving her some very sage advice about men and especially Dutton. Also, in attendance are Sophia's niece and nephew. George and Elizabeth Grey.

Anne has an absolute ball seducing Dutton and keeping him off balance. The conversations were witty, hilarious, smart and razor sharp. Poor Dutton didn't know what to think. This Anne was not the same woman he knew two years ago. But, things do not always go according to plan for Anne and there may be a few problems that could derail her plans.

This is the sixth Courtesan Chronicles novel. This one is set in the latter part of the Regency period and is cleverly plotted to give the reader a spicier regency romance than we would normally get. Since Anne is widowed, she feels free to enjoy life without the confines of marriage and Dutton makes the perfect lover. She doesn't pretend there is anything like love going on between them, just pure lust. Of course, there is more than that, but it's Dutton, not Anne, who finds himself blindsided by that realization.
A very fun and lively Regency romance. This one gets an A.
Posted by gpangel at 1:00 AM