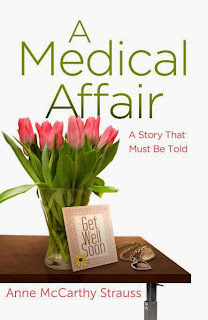 A Medical Affair by Anne McCarthy Strauss is a Bookthrope publication released in September 2013. I received a copy of this book from the author in exchange for an honest review.

Heather is a single woman that has given up on the traditional marriage and children norm. Now in her late thirties, she has decided to adopt a baby from China. She moves into an apartment in preparation for the adoption and soon after suffers a major asthma attack brought on by the freshly painted walls. This gets her a trip to the ER.
Heather's first encounter with handsome James Davis MD has her praising his bedside manner. Relieved that she is going to be alright, she makes an appointment with Dr. James for a follow up. Instantly the chemistry between them leads to a flirtation, which eventually leads to a full on affair with the prestigious doctor who also happens to be married.

Putting aside the obvious moral issues that go with becoming involved with a married man, which Heather must bear at least some responsibility. (After all, she knew going in that the good doctor was married. She was an adult in her late thirties, not a young impressionable girl.)
Now, having said that, the doctor was in the wrong and took advantage of his position. The chain of events that unraveled the lives of all concerned is a cautionary tale all women should be on the look out for.
My personal experience these days with doctors has been a little less private than before. Two are in the room during certain examinations to protect both the doctor and the patient. However, there are still plenty of opportunities for doctors to manipulate patients.
The God complex and arrogance that doctors often have as a result of the prestige associated with being a doctor can make this type of situation an easy trap to fall into. One of the most disturbing passages in the book, and there were many, was a conversation the doctor had with another doctor friend of his. They bragged about their sexual conquest and how just dropping the phrase "I'm a doctor" opened up opportunities with women quite easily. Laughably so if you believed those two.
Overall this was a chilling novel that would be a great group read for a book club. There are many discussions that could be dissected. A very compelling and thought provoking read. You will think about this one long after you have finished the book.
Overall this one is an A. 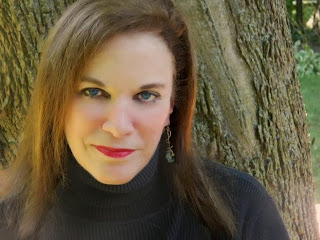 You have written for magazines and other publications. Is this your first novel?

A Medical Affair is the first novel I have published. Like most novelists, I wrote other manuscripts but was unable to attract an agent. I wrote Lady of the House, the story of two women vying for the same man, in the 1980s. About six years ago, I wrote The Passions of Betty Boomer, the story of a young woman married to an old man – not chronologically old, but without energy, interests or passion for his wife of many years. A Medical Affair is the first book for which I obtained agent representation.

What inspired you to write this novel?

I have heard many stories from women I know and in the media that address the tremendous problem of doctor/patient affairs. The statistics are overwhelming. I do get annoyed, I admit, at the many reviewers who ask me if A Medical Affair was based on personal experience. If it were, I’d have reported the doctor and be living of the proceeds from the lawsuit.

Still, some people assume A Medical Affair is some sort of memoir. If it has traces of memoir, they’re the memoirs of the countless number of women who have been taken advantage of by their doctor’s unethical behavior. It’s an educational novel that warns women about a problem that is epidemic in many parts of the world.

Over the years, I’ve heard many stories about women who became involved with their doctors. None ended well. Intrigued by this dynamic, I started what turned into two years of research on the subject. When I learned that it is both unethical and illegal for a doctor to have an affair with a current patient, I was inspired to write A Medical Affair to let other women know.

In your estimation, how often to do you think doctors step outside ethical boundaries in the way depicted in A Medical Affair?

It’s impossible to answer that question accurately. But I firmly believe the words of my book’s preface: "Nobody talks about it, but it happens all the time…"

In one survey, 12 percent of doctors admitted to having had sex with at least one of their patients. So, since people lie, it’s fairly safe to assume that number is closer to 24 percent. The most likely perpetrators are general practitioners and gynecologists. Psychologists, who are not MDs, have the worst track record of all. But because they’re not medical doctors, their behavior is monitored by separate ethical boards than those that oversee doctors.

I discussed this with friends in the medical field. As when you work in a corporation and see affairs going on, many doctors see the problem within and outside of their own medical practices. Based on my own feedback, I expect it’s likely that at least one in four doctors has become involved with at least one of his patients.

Do you think Heather was also partly responsible for going along with the initial flirtation that led to such terrible consequences?

Yes, I do think Heather was responsible or, at least, appeared to be. She was an apparently consenting adult. She knew Jeff was married. However, she had no idea that, under law and the tenants of the Hippocratic Oath, the doctor-patient dynamic makes it ethically and legally impossible for a patient to truly consent to having sex with her doctor.

What is it that women find attractive about doctors? Some people of a certain age did behave as though doctors were all knowing and many women have crushes on their doctors. But, hey my doctor does not look anything like Dr. McDreamy! So, is it the money? The social status?

I think, traditionally, the prestige, power and money that went along with the medical profession caused a lot of women to have crushes on their doctors. Managed care changed that, and it’s only getting worse. However, I think that dependence on the doctor’s knowledge and skills still remain a turn-on. When you’re sick, you rely on your doctor to make you better. That’s some pretty powerful and attractive stuff.

This novel was disturbing. So many lives were destroyed.  What should you do if your doctor steps over a line or makes you uncomfortable?

Additionally, if you object to your doctor having crossed the line, you should report him. Every state has a medical regulatory agency similar to New York’s Office of Professional Medical Conduct (OPMC).

I am about halfway through a novel about four women who renew their friendship at a high school reunion. The book is loosely based on the high school I attended in an affluent town on Long Island. The four girls had never known anything but financial security. Decades later, as they reflect back on life after high school, they learn about the divorces, alcoholism and other diseases that affect them or their significant other, jobs, sicknesses and troubles. The book, as yet untitled, brings the four women together again under circumstances that don’t remotely resemble their carefree youths.

Where can readers contact you and where can we buy your book?

Coffee. With Sweet and Low and non-fat milk.

What genres do you enjoy reading?

I was a self-help junkie for many years. Now, my reading is mostly confined to contemporary women fiction.

Tell us about your dogs.

My husband and I got our first dog when our son got married and moved away. Charlie, a black and tan Cavalier King Charles spaniel, was the love of our lives. To keep him company, we got a female blenum Cavalier. Bringing Cookie into our home was like having a second baby – two years of sibling rivalry and potty training. Charlie died way too young, at seven, from mitral valve disease, an all-too-common problem among Cavaliers. Cookie went into a deep depression when Charlie died. She now has a little brother, Oliver. And ten years and two kids later, my son still says we tried to replace him with a dog.

Absolutely. The quote is from the Rolling Stones’ Ruby Tuesday, It says simply and accurately, "Lose your dreams and you will lose your mind."

Thanks Anne for taking the time to answer a few questions for us today! a Rafflecopter giveaway
Posted by gpangel at 12:00 AM