A LITTLE TOO MUCH BY LISA DESROCHERS 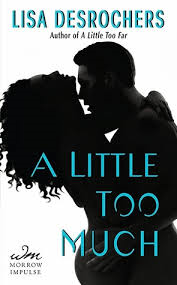 A Little Too Much by Lisa Desrochers is an Avon publication released in November 2013. I was provided a copy of this book by the publisher and Edelweiss in exchange for an honest review.

Hilary has had a very hard life for a woman just entering her twenties. Having survived the horrors of living in a group home and with a mother in prison, Hilary has pulled herself together the best she could. She now works hard to become a singer and dancer on Broadway. She has a boyfriend, but there is little real emotional attachments since Hilary "doesn't do love".
When Alessandro shows up on her doorstep out of the blue, Hilary's past comes rushing back. When they were in the group home together, Alessandro and his troubled older brother, Lorenzo were both involved with Hilary. Alessandro has decided not to enter the priesthood after all, but still feels the weight of his brother's death and the crimes they were both a part of. Needing to make some sort of peace with the girl he feels like he took advantage of, Alessandro begs for Hilary's forgiveness. Initially, Hilary isn't in a forgiving mood.

As the story progresses we are given insight into what life was like in the group home. Hilary was sexually active way too early in her life to emotionally cope. Lorenzo was rough and was all Hilary had to go on. Alessandro showed her the difference, but he and Lorenzo left her and she became a victim to some pretty rough characters in the home. For years, Hilary has blamed Alessandro for his abandonment.

Now each week the two meet and try to put the painful past to rest. However, there are some HUGE reveals that will either bring everyone closer together or it will tear them all apart.

Alessandro and Hilary's story is a little more on the dark side. Hilary is fortunate to have come out of her teens without being in worse shape. Alessandro is the same way. Both of them were victims of poor parenting and a lack of supervision and familial love.
I had some issues with Mallory and some issues with Alessandro as well. Mallory attempted to control the situation, but not because she thought she was doing the right thing for all concerned, but because she was thinking of herself. Then, Alessandro was frustrating by being way too passive. Hilary's accusations were spot on. Alessandro needed to show a little more backbone and be a man.
I liked Hilary the most, and admired her for having survived a terrible beginning in life and for being strong enough to forgive and help others to forgive as well.
The ending was perfect. The acknowledgment of the fact that Hilary will still have many issues to face and will need for Alessandro to be patient with her was more realistic than trying to convince us that everything will be a bed of roses for everyone in the future. There is still a very complicated family dynamic that will require a lot of give and take to make it all work and that won't be easy. Everyone is off to a good start though and I was very happy with the way it all came out.
Overall this one is an A.
Posted by gpangel at 3:00 AM