A HIGHLANDER BETRAYED BY LAURIN WITTIG 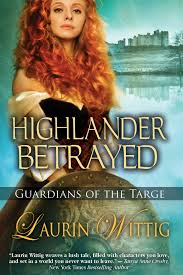 Highlander Betrayed by Laurin Wittig is a 2013 Montlake Romance publication. I was provided a copy of this book in exchange for an honest review.

Rowan has been having sharp headaches and experiencing some frightening occurrences. Something is amiss. Rowan's Aunt Elspet is in ill health. She is the guardian of the Highland Targe. Without a replacement being named, Rowan is becoming nervous. One of her cousins will inherit the responsibility, but no one has been named yet. Their safety depends of the Targe and it's guardian.

Nicolas and Archie are sent from England by King Edward to retrieve the Targe. Nicholas, a half English , half Scottish spy manages to infiltrate the area near the village of Oban and the Castle Dunlairig. A kink is thrown into his plans when he meets Rowan. Now he will have to decide once and for all which side he will stand on. But, if Rowan discovers he is a spy there will be hell to pay.

This action, suspense, paranormal, historical, Highlander romance was a real delight. As you can tell, there was a bit of everything mixed in to this one. The legend of the Targe and the guardian that protected it and kept the people of the Scottish Highlands safe from attack has King Edward thinking of removing yet another protector from Scotland to send a message that he was capable of doing them harm. His choice in sending the master spy, Nicholas was certainly by design. Nicholas could use his heritage to get close to the guardian and to the Targe. Rowan, rattles him good. She is pretty and honorable, and loyal and will fight for her loved ones. Nicholas begins to question his own loyalties the more time he spends with Rowan. After all he is part Scottish. Will he decide to embrace this part of his lineage? What of his partner in crime, the diabolical Archie? Who will be the next guardian of the Targe?
I love anything to do with Scottish Highlanders. I also liked the legends and stories about the Targe. Of course, the family dramas and the danger and intrigue were great too. The romance was done right as well. Nicholas was a hottie, but in keeping with the time frame which is way back in the 1300's, stealing a kiss was big deal. The steam level was about a 2.
I wish this one could have been a just a little longer. Stay tuned though- there will be more in series.
Overall this one is an A.